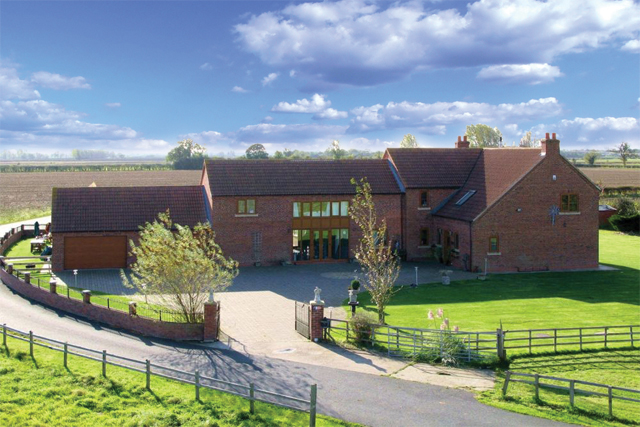 Home which invites you to dive right in

When Derek Jacklin drew plans for his wife Paula’s dream home on the back of a cornflake box, he never imagined it would one day lead to a building company of their own. Yet when Chestnut Manor at Willingham by Stow, near Gainsborough, was built, it impressed friends and family so much that soon the couple were being commissioned to build properties themselves.
From small beginnings, the couple’s building firm Kane Developments is now a hugely successful going concern. But now most of their children have fled the nest and with different interests taking up their time, the property that sparked the company and that has been a family home for thirteen years has been placed on the market.

Paula said: “It’s been a very difficult decision to decide to sell our home because it was everything we wanted. But our lives have changed so much now that it’s not practical anymore.”

Derek and Paula were busy with their nightclub, A Slice of Heaven (formerly known as Kristy’s Nightclub) in Gainsborough and its thirteen table snooker hall with American and English pool tables, ‘Buddy’s Bar’, when they got their first taste of renovating properties. They had converted a two bedroom bungalow in Walkerith Road, Morton, into a five bedroom home to accommodate themselves and their four children, Aaron (now 30), Sam (28), Kristy (22) and Kane (15).

Then in 2000, they sold the property and the five acres of land it stood on to Alison Homes, who built a housing estate on the plot, and started looking around for a new home.

“I’d always dreamed of a having a house with a big driveway leading up to it,” said Paula. “Derek would drive around to see if there were any properties suitable for conversion or a plot we could build on.

“One day he came home and said he’d seen something – it was a plot of land in a peaceful location with two derelict farmhouses on it and it was fantastic!”

The couple discovered the land and buildings were owned by Limestone Farming and quickly approached them with an offer that was accepted. They knocked the buildings down and built their dream home on the land.

“My husband designed the house on a cornflake box and asked the architect to draw the plans up,” Paula added.

“We started building the day after we got planning permission and it took just ninety days to build the shell and five months from the start to finish the house.

“We stayed in a static caravan in the field in front of the property that winter – it was a horrendous time but very exhilarating to see our creation going up.”

Once the house had been built, a team of fourteen decorators were drafted in on a Saturday morning to decorate the house in one day. Then an artist from Sheffield was commissioned to paint a Michelangelo hand of God mural on the ceiling of the swimming pool room and a Poseidon on the back wall.

Derek designed the kitchen himself to a high specification with granite worktops on the island unit and an Italian slate floor. Finally the family moved into the property in March 2000.

Paula said: “It was fantastic to finally be in our home. Even now I love the driveway and the views from the house are breathtaking. We can see across the fields for ten miles around and on a clear day we can see Lincoln Cathedral from the back bedrooms.”

Originally, the property had its own stable block where Derek indulged his passion for horses and would entertain the Burton Hunt. But when hunting was banned and their son Sam decided to move back to Gainsborough with his family, Derek converted the stables into a three-bedroom annexe.

By 2001, people who had seen Chestnut Manor approached Paula and Derek to build homes for them as well and Kane Developments was born. Since that time, the couple have demolished the old council offices at Gainsborough and built the St Thomas Mews project at Cross Street, several streets full of houses in Gainsborough including All Saints Mews, Parish Mews and St Andrews Court, a development at Skellingthorpe near Lincoln, an individually designed house called ‘Costabundle’ at Knaith Park, Gainsborough, and another at Wildsworth, near Gainsborough.

“We have been very fortunate and even though the bottom dropped out of the market it didn’t affect us,” said Paula. “We even sold one entire street of houses to an Irish buyer!”

At the same time they launched the building company, the couple decided to sell their nightclub and snooker room.

Paula said: “We’d had the nightclub for twelve years and I’d had enough of it. We never had weekends to ourselves; I wanted to get back into playing darts and opening the nightclub was the reason I gave up playing, and everyone was asking would we build them houses.”

It was certainly the right decision for Paula, who had played darts for England before taking on the nightclub business. She had started playing at just fourteen at The Ferry House at East Stockwith with her father, Jim Bull, who owned Bull’s Butchers in Gainsborough.

“I got beaten and had to mark the board every week for a year and then I just got to a standard where I started to win and other people had to mark the board for me,” said Paula. “Then I won the local tournament ladies’ individual in Gainsborough when I was fifteen and won it for thirteen years after that.”

Paula progressed to playing darts for Lincolnshire and then for England until the nightclub took up all her spare time and she ended her darts career. Since taking the sport back up seriously around five years ago, Paula has become captain of the County Darts Team.

Now the couple spend around twenty-five weekends a year abroad representing England at darts and have attended tournaments in Barbados, Germany, Prague and Belgium and most recently the Dutch Open in Holland.

And their son, Zane is following in their footsteps – at thirteen he was the youngest qualifier for the Winmau World Master Qualifier and he has since won the Gibraltar Open, the Vauxhall Open and now plays for the Lincolnshire Super League Men’s.

With a holiday home in Spain that they live in from June to September and with the three eldest children having fled the nest, Paula and Derek now feel the time is right to sell their home.

Paula, who now has four grandchildren, Caitlin (11), Sam Jnr (2), Declan (2) and baby Dylan, said: “This has been a fantastic family home to live in and we have many happy memories of parties around the pool for our children and grandchildren. But now that it’s just three of us living here, we rattle around the place.

“We have had lots of interest in our home but we are just waiting for the right buyer to come along. We would be happy to accept a part-exchange as we also rent properties ourselves and could add it to our portfolio.”

So where will the family move to? Paula added: “We are currently renting out a lovely property in Lea, near Gainsborough, that we could move into. It’s perfect for the three of us with a guest bedroom, vaulted ceiling and footballers’ wives bathroom in marble and chrome.”

• Chestnut Manor at Fillingham Lane, Willingham by Stow, near Gainsborough is on the market with Chesterton Humberts for £795,000. For more information contact the estate agents on (01522) 546444.