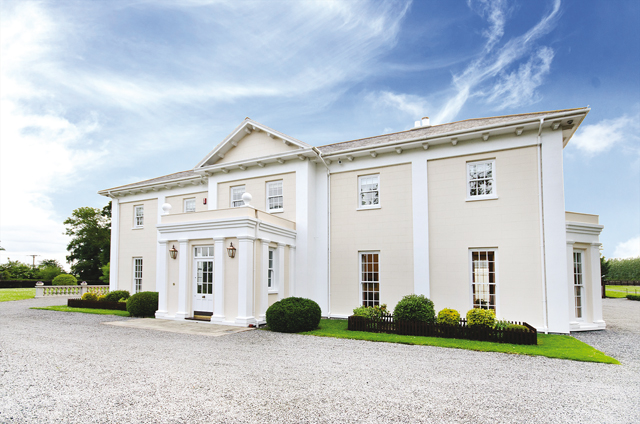 Home which offers an extraordinary lifestyle

When Mike Henden and his wife Lynne decided they wanted a change of lifestyle, they never imagined Lincolnshire would hold the answer.
Mike, who is the director of a commercial audio and lighting distribution company based in Bedfordshire, had run his business for fourteen years and wanted to enjoy the fruits of his labour. Lynne, in particular, was keen to have equestrian facilities within the grounds of their new home.

It was Lynne who spotted Beesby Hall, near Alford, advertised in Country Life magazine. Although she thought it was the perfect house – modern with classical features and set in its own grounds of 11.25 acres – she had kept tight lipped about it, as it was so far away from the business. Then on a visit to relatives in Lincolnshire in September 2002, Mike mentioned he could see himself living in the county.

“Lynne said that funnily enough she had seen a really amazing property,” said Mike. “So we agreed to view it just out of curiosity.”

During the viewing, the builder was landscaping the grounds and putting the finishing touches to the house which was a new build, built on the site of a former rectory which had been demolished.

Known as The Old Rectory and standing next to St Andrew’s Church in Beesby, the original property had been used as a large farmhouse during the Regency period and then during the Victorian period it was much improved by the Mason family, who were the Rectors of Beesby. Henry Payne Mason laid the original gardens of the house, planting specimen trees, and both he and his wife are buried in the local churchyard.

The house eventually was left to the Diocese of Lincoln and during the Second World War was occupied by RAF pilots. It was later sold off by the church and under different ownership was allowed to fall into disrepair before being bought by the developer, who demolished it to make way for Beesby Hall.

“As soon as I saw the Hall, I had a feeling it would be amazing to live here,” said Mike. “The builder was sanding the parquet floor at the time and there was a fire going in the hallway. It was a beautiful day outside and it just took me to a different place in my mind.”

But living in a detached house on a housing estate, the couple were slightly intimidated by the thought of taking on such a property. “We drove back down the A16 and decided we just didn’t have the nerve for it,” said Mike. “Maybe at the time the business wasn’t quite where it needed to be.”

But the following May, when a colleague mentioned that the house was still on the market, Mike and Lynne decided to view it again.

“We hadn’t stopped talking about the house for six months and in our minds, we’d been making it fit,” said Mike. “We thought the best thing to do was to pay Beesby Hall another visit just to rule it out completely!”

By that time, the developer had commissioned an interior designer to put the finishing touches to the seven-bedroomed property. Where before there had been bare plastered walls and empty rooms, now the house felt homely with tasteful furniture and curtains, blinds and carpets in every room. Outside, they were impressed with the landscaped gardens, swimming pool and space for equestrian facilities.

“The soft furnishings and furniture made a massive difference and was a large cost saving, as we could move in immediately with just some of our furniture and personal effects,” said Mike.

This time, Mike and Lynne left the property determined to make their dream a reality. They put an offer in on the house, rented out their Bedfordshire home and moved themselves and their two sons, Charlie (now 18) and Ollie (17), to Beesby Hall in November 2003.

Mike immediately set up a home office to run the business and the new house; the children attended the nearby Alford Primary School (where Mike became a governor for eleven years) and the couple employed the services of a cleaner and gardener to help them maintain the house and grounds.

As Lynne had horses, the couple immediately installed temporary stable facilities in the grounds before successfully applying for planning permission for a stable block with hard standing for several vehicles, a manège and two large storage sheds which were built three years later.

Over the years Lynne put her stamp on the Hall, decorating with wallpaper and paints, and recently the couple have overhauled the utility room and all the bathrooms to a high standard.

The couple have made many happy memories in the house, with their friends and family invited for Christmas banquets, New Year’s Eve parties, formal events and family gatherings. Mike has particularly fond memories of his uncle’s 80th birthday party five years ago, which saw relatives travel from across the country to stay in the Hall and celebrate the event.

But now with the children leaving home, Mike and Lynne have decided the time is right to sell their home. They have placed it on the market and taken the unusual step of creating a bespoke website at www.beesbyhall.com to enable people to view the house online thoroughly.

“Beesby Hall is not about bricks and mortar,” said Mike. “It’s a lifestyle that we have enjoyed with our friends and family. In the winter, we have four log fires burning and a huge Christmas tree in the hallway; in summer, the house opens out to the gardens and swimming pool. It’s been an amazing experience living here and we are going to miss it.”