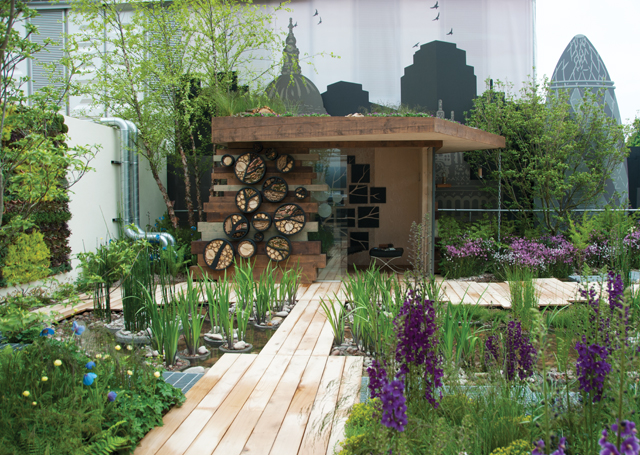 Steffie Shields finds inspiration at the RHS Chelsea Flower Show celebrating its Centenary Year.
The beating heart of gardening is alive and well, despite the coldest spring in thirty years. I was fortunate to attend the RHS Chelsea Flower Show – an adrenaline-fuelled flower fest like no other in the world. Thirty-four large and small gardens set the media buzzing with ideas and trends, sowing seeds of change. The best will undoubtedly percolate down to lift gardens open to the public, and hopefully our own private patches.

Sculpture featured prominently, none more colourful than Marc Quinn’s eye-catcher, a huge bronze orchid, painted with eighteen layers of paint that were rubbed allowing a rainbow of colours to shine through. Specially commissioned to inspire the next generation of horticulturalists, this was later auctioned in aid of the RHS Centenary Appeal ‘Horticulture Matters’ to create a schools programme and much-needed apprenticeships. Alan Titchmarsh fears that the gardener is fast becoming an endangered species. We cannot afford to sit back on our sun loungers. What a mundane life it would be without passing on to upcoming generations what we inherit and what we leave behind, the skills of gardening, the invigorating visual pleasure, scents and enriching stories that come from the nation’s gardens and plant collections.

The very first show garden, designer Roger Platts’s M&G Centenary Garden ‘Windows through Time’ ‘had me from hello’, a masterful blend of lush trees, shrubs and roses popular in the 1900s to modern plant cultivars, uniting the various moods from romantic picturesque, to rustic and then bold contemporary. A rusted iron sculpture, twin C’s marking 100 years of Chelsea, framed an enchanting view of a stylish, thatched summerhouse. Turning the corner, another rust-coloured feature dominated the horizon of the showground, this time a glass studio as if a giant Telopea flower on a rocky outcrop. Trailfinders Australian Garden won the coveted Best Show Garden by showcasing the possibilities of sustainable landscaping. We all love a billabong! Some 250 years after Sir Joseph Banks ignited our passion for plant-hunting, our love affair with exotics from the other side of the world has not dimmed.

Christopher Bradley Hole handled planting in a controlled, Japanese manner, creating a garden to contemplate, rather than walk through, inspired by patterned fields in the English landscape. The narrow, confined walkway around two sides, so as to observe the garden framed by the uprights of an oak colonnade, did not invite, nor was I attracted by his patchwork of clipped blocks of box, yew and beech, interspersed with pools of water. However, patches of wild, such as pale blue Amsonia tabernaemontana var. salicifolia in amongst grasses, were an effective contrast in texture. Later, on the train home, speeding past rape fields, I recalled that his muted, old-fashioned palette of colours had none of the immediacy and vibrancy of the real countryside.

The breathtaking, exquisite Japanese entry, ‘An Alcove’, scooped Best Garden award in the smaller Artisan Gardens category. Enchanted by a moss-studded waterfall edged with feathery Acers of coppery red and lime-green, I turned to applaud designer, Kazuyuki Ishihara and his team standing behind me. Later I read that he wanted all show visitors to enjoy this ancient Japanese culture of communication, so I’m glad I conveyed my approval!

Peeping over the hedge of the Arthritis Research UK Garden, you could spy through a veil of trees and Rosa glauca foliage into a secluded private space, a sleek glass room, complete with open fire. This housed a priceless plant said to help cure arthritis, Frankincense. Three different, equally sensational sculptures vied for attention with magnificent, jewel-coloured herbaceous borders punctuated with tall Echiums: a bronze figure ‘Homage’ studded with acorns, ‘To the Limit’, both by Anna Gillespie, and the exultant wirework ‘Liberty’, representing freedom from pain by Michelle Castles. Well-known designer, Chris Beardshaw has, quietly and stoically, suffered from a rare form of rheumatoid arthritis since childhood. His personal journey added emotional layers of meaning, to win, quite rightly, the People’s Choice Award.

With high hopes to take in some sights of the Chelsea Fringe, particularly across the river in Battersea Power Station, my weary bones gave up on me, but not before I checked out the amazingly diverse daffodil display in the Grand Pavilion. Johnny Walkers of Taylors Bulbs, Holbeach, nervously awaiting the judging results, was wasting energy. I never doubted his twentieth consecutive gold would be in the bag! Many congratulations also to Tom Harfleet and Paul Harfleet for ‘Digital Capabilities’, sponsored by the University of Lincoln – both an excellent name choice bringing to mind the famous nickname of the father of landscape gardening, whose 2016 Tercentenary is fast approaching – and scooping gold in their first Chelsea, for the only innovative, conceptual garden to go viral! Worldwide Tweets controlled moving panels to reveal a hidden, exotic garden beyond, before automatically sending back a photograph of the garden to the person who had texted or tweeted.

Will dynamic networking change the way the next generation gardens? Will busloads of schoolchildren and teachers be allowed in to experience Chelsea’s fantasia? Amusing how, every year, many versatile Chelsea designers go to great lengths to bring wild nature to the heart of London, something we country folk often achieve by not gardening! High time they moved on from their love affair with cow parsley. Will they gather lilacs in the spring again? Bring back sweet-smelling flowering shrubs and roses, I say, a twenty-first century ‘Capability’ pleasure ground. Care to tweet about that?