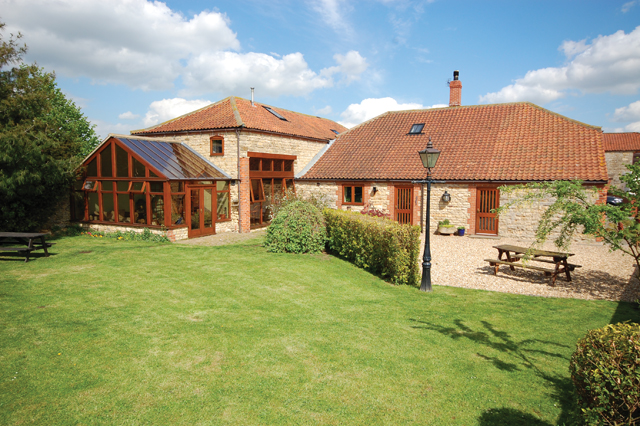 Ideal home for horses and riders

When Phil and Susan Bennett bought Low Farm at Aisthorpe, near Lincoln 30 years ago, it was completely derelict.
The couple, who own heating engineering company C&P Heating and have two daughters Vicky (29) and Camille (28), were living in nearby Hackthorn at the time but decided to make the move to accommodate Susan’s fourteen beloved horses.

“We needed more land because we had too many horses for the land that we had,” said Susan, who rides every day. “Low Farm was completely derelict and hadn’t been used for forty years but it appealed because of its location – it’s close to Lincoln for shopping and going out, close to train stations and although it’s in the middle of the countryside, it’s not isolated.

“As far as the horses were concerned, the hacking out and riding out is safe and the scenery is beautiful.”

Originally, the couple lived in the farmhouse and used the barns and outbuildings for the horses. But as time went on and they reduced the number of horses to six, they decided to convert some of the barns into living accommodation for themselves.

Parish Records show the traditional barns, which are all made from Lincolnshire stone with red pantile roofs, date back to 1840.

Initially in 2000, the couple approached an architect and structural engineer and worked with West Lindsey District Council to ensure their plans didn’t detract from the historical beauty of the buildings. Once planning permission had been approved, they worked with local builders to transform a T-shaped barn, which had last been used as a milking parlour, into a stunning five-bedroom family home.

The planning permission also covered the creation of four one and two-bedroom holiday apartments in another long barn as, at the time, Phil and Susan wanted to turn that part of the property into a business.

When building work started in 2002, the dilapidated state of the barn meant it needed everything doing to it including repointing, a new roof, floors, a new wiring system, plumbing and so on. Once the basics had been tackled, the couple ensured the barn kept its heritage feel by laying imported Italian Travertine stone flooring and installing a handmade Cherrywood kitchen.

It took two years to complete the work and the couple were thrilled to move into their new home in July 2004. By then they had also sold the farmhouse.

Susan said: “Our friends were coming over from abroad and we were so excited that the barn was finally finished that we moved in and had a big party. It was a really nice way of doing it.”

The house, which sits in 8.1 acres of grounds, is perfect for entertaining as it has five bedrooms, a farmhouse kitchen, a garden room and large sitting room and double height reception hall with a large picture window to the rear.

For the horse enthusiast, there is stabling for ten horses in two smart rows of brick faced stables with further stables and storage, a walled lunging ring/turnout area with rubber surface and water trough. There is also level paddock land with post and rail fencing and water connected.

Looking to the future, a fully plastered integrated double garage has the potential to be converted into a games room, and the barn with planning permission to create four one and two-bedroom holiday apartments could also, subject to planning, be turned into an out-of-town office.

Since moving in, Susan has described life at Low Farm for their family, which includes their three Doberman dogs Millie, Ren and Solace, as “absolutely ideal”. “When we first moved in, I was pregnant and had a small child,” said Susan. “The girls had a wonderful childhood here – both went to local primary and secondary schools and had a good social life.

“I ride every day and the location is perfect for horse riding. The lanes are quiet and narrow with very little traffic and good bridleways. It’s close to a few equine centres, where you can use indoor arenas and it’s centrally situated for large events as well.”

Now, however, with fewer horses to accommodate and with their daughters having flown the nest, Phil and Susan have decided the time is right to move on and have placed their home on the market.
Susan, who is now looking for a new home in the Lincolnshire Wolds, said: “If it wasn’t for the fact that I don’t have so many horses and that both our daughters have moved away, we would have stayed here forever. It is sad and heart wrenching to move on but it is impractical for us to stay here now.”