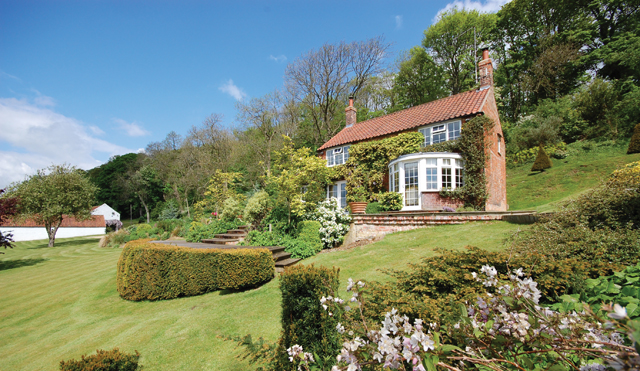 When James Jessop was left a dilapidated cottage on a hill in the heart of the Lincolnshire Wolds by his uncle Bill Jessop, he didn’t hesitate to make it his home.
For the former farm labourer’s cottage, known as The Ovens, at Harrington, near Louth has far reaching, 180-degree views of the surrounding countryside and is set in almost thirty-seven acres of tranquil and beautiful grounds.

James, who previously worked in the USA, said: “Living here was too good an opportunity to miss. If you stand at the top of the hill behind the house, you can see over to Yorkshire on one side and to Norfolk on the other.

“It is totally private and there are times, if I choose not to leave the house, I don’t see another soul all day.”

The house has been in the Jessop family since James’s grandfather Thomas Jessop and his wife Muriel bought Harrington Hall just after the First World War. The couple had four children and the family were very keen on racing and country pursuits and at one point the Southwold hounds were kennelled at The Ovens. Harrington Hall was sold out of the family between the wars and the family moved into a large farmhouse in the village.

When Bill married his wife Sybil, the couple moved into The Ovens (the house is so called due to its bowl-like, south facing location). Sybil was a member of the Lampson family, a well-known horse racing family from Newmarket, and was a leading amateur jockey. Sadly, Sybil was killed when she fell from her horse during a point-to-point race at Brocklesby over fifty years ago. Bill continued to live at The Ovens and farm the land until he died in September 2000.

In 1998, James had returned to Horncastle after living a jet-setting lifestyle working for a Texan oil and cattle baron. His work took him to New York, California, New Mexico and Texas but after fifteen years he was ready to return home to the house his father had left him.

James’s parents Toby and Joan Jessop were well known locally, being former masters of the Southwold Hunt. James’s sister Cherry, who lives in Leciestershire, is still a keen follower of hunting.

When James was left The Ovens by his uncle, he embarked on an eight-month renovation project to bring the house up to modern standards. During this time, James stayed with friends in Louth but made regular trips to oversee progress of his new home.

James said: “The house was typical of those days when people didn’t spend any money on their homes and it was in a pretty sorry state, needing a lot of TLC.”

The property was completely modernised starting with a new roof and floors, rewiring, re-plumbing and a new kitchen and bathroom. James’s friend Ian Stubbs, who is a landscape architect, helped James tremendously throughout that time.

The three-bedroom property is set in around 1.3 acres of formal grounds. Gently sloping pastures and woodland extending beyond make a total of 36.8 acres.

Described as ‘immaculately presented’, the property is accessed through an impressive inner hallway which opens into the drawing room, giving a feeling of open, flowing space belying the size of the property. A recessed area to one side is lit with a skylight and high level window. An open tread staircase rises to the first floor, giving an architectural edge without overpowering the space.

The main living area is divided into a large drawing room/dining room. An entire wall of the drawing room is devoted to a deep bay window with central glazed door which provides expansive views of the glorious countryside. The room has a beamed ceiling and features a raised fireplace with wood burning stove; a timber over-mantle is supported by a pair of stone antique gargoyles. The dining room occupies the other half of the L-shape space and has wide French doors leading onto the stone-flagged terrace.

The handmade kitchen is fitted with a range of painted base and wall units with natural timber work surfaces and features an oil-fired Aga. There is an additional electric oven and ceramic hob with extractor.

There is also a utility/pantry and a WC on the ground floor.

For a cottage, the first floor is unusually spacious, whilst high sloping ceilings to the front and rear of the house add character. Upstairs, there are three bedrooms, one of which is currently being used as a dressing room/study and the shower room, which could be reconfigured to take a bath.

The 1.3-acre formal garden features beech hedging, a box parterre, paved terraces, raised perennial flower beds and yew topiary. The land beyond is undulating and laid to grass pasture and features a pond which is below the house. A further eleven-acre paddock could be available by separate negotiation.

James, who shares the property with his dogs – a terrier called Slarty and a Pug/Shih Tzu called Cho-Cho, said: “It has been a great privilege to live here. The property is in the best part of the Wolds in an Area of Outstanding Natural Beauty known as ‘Tennyson’s country’. It’s a great place for dogs as they can run free and there are bridleways galore for riding nearby.”

Now, however, James has decided to sell The Ovens and hopes eventually to live in the historic Westgate in Louth.