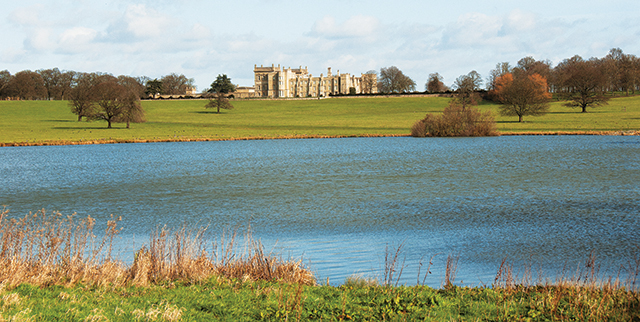 ‘Space is essential to a lake; it may spread to any extent; and the mind, always pleased to expand itself on great ideas, delights even in vastness.’ Thomas Whateley, 1770.
I have visited the county’s premier seat, Grimsthorpe Castle, many times and never tire of going whatever the season. Put simply, it is a special place to let your imagination loose. Enjoy a good walk in the extensive gardens and ancient deer park that are open regularly for all to explore. The peaceful ‘off the beaten track’ ambiance, with magnificent views over one of Henry VIII’s favourite hunting grounds, belies many layers of history, sometimes laid waste by wars and disastrous politics. If the gnarled veteran stag-horn oaks could voice their witness, what stories they would tell of civil war soldiers camping in the woods, or, in better times, jockeys chasing on Fallow Field Gallop.

The north front of the castle, remodelled by Sir John Vanbrugh in the early eighteenth century, straddles the ridge and commands attention. The truly memorable park panorama was first recorded in the first decade of eighteenth century in a fine Kip/Knyff engraving, with the narrow West Glen river in the Vaudey Valley (or ‘Valley of God’, named earlier by Cistercian monks) neatly divided into separate fishponds. The impressive, sweeping panorama of parkland pasture and woodland is united by a great lake, as if a major river in the valley, thanks to the work of two great engineers – the Northumbrian Lancelot ‘Capability’ Brown and, later, local civil engineer John Grundy Junior.

Strategically placed oaks lead the eye up beyond the causeway west in the direction of Swinstead to a three-storey summerhouse attributed to Vanbrugh. Nearby, ‘My Lady’s Lodge’, undoubtedly equally well built, once overlooked the most northerly pond where Lady Elizabeth Lindsey entertained her guests, the wife of Robert, 3rd Earl of Lindsey. Another Brown commission, his first as an independent architect, engineer and land improver in London, provided a great plan for Packington near Birmingham that included a proposal for ‘My Lady’s Lodge’, a smart Palladian building with a portico and terrace on the first floor to be situated close to the lake. I wonder if Lady Lindsey’s Lodge could have been his inspiration?

Water reflects park features and changing skies, and fires our imaginations, poses questions and helps us to forge links with the past. The sometimes extreme weather incidents, soil conditions and severe drainage problems we face are exactly the same as were faced by landowners, agents and labourers over 250 years ago whether in drought or flood. Designer Stephen Switzer, who worked alongside Vanbrugh, laying out bastion gardens along the ridge, foresaw that clever use of hydraulics and drainage would improve both the utility and beauty of the park.

Brown in his first major project for a nobleman, Peregrine Bertie, 2nd Duke of Ancaster, began the process of naturalisation to improve and drain the surrounding boggy pastures for farming. He engineered a great dam and created a ten-acre lake ‘Mill Dam Pond’. This was later enlarged further by Grundy Jr, as Brown had been engaged at Stowe. The dam, now screened by planting with great trees garlanded with mistletoe, is a favourite haunt for fishermen. A barn-like cistern house a distant feature still standing on the edge of Bishophall Wood above the main lake is the sole reminder of cutting-edge hydraulics experiments initiated by both Brown and Grundy. An ornamental, hexagonal building once stood nearby housing an early steam engine to draw fresh water by gravity from nearby springs and pump it up to the castle.

In 1771, by then George III’s Master Gardener and a celebrity consultant, ‘Capability’ Brown, returned to Grimsthorpe Castle. The polymath contemplated the vast panoramic views, gave forestry advice and several more plans for improvement, including plantations for game cover. His grand idea for a more prominent eleven-arch bridge over the causeway, deemed too costly, was sadly never realised. However, Grundy did go on to implement Brown’s suggestion to extend to a third reservoir beyond the upper pond level of water, to act as a silt trap and to aid the flow and water management, long since filled in.

Access and events manager, Ray Biggs often leads stimulating park tours. His passion for Grimsthorpe and in-depth knowledge makes the history come alive as you stretch your legs and benefit from the exercise. His voice softens as he talks about the young twenty-two-year-old musician, Thomas Linley the younger, a contemporary of Mozart and considered one of the finest violin players in Europe. In August 1778 Thomas tragically drowned in a boating accident after the boat capsized. Thankfully, the contemplation of nature has a way of compensating troubled waters, giving solace and renewed hope.

This year Ray hatched a plan to take part in the 300th anniversary Festival celebrations of the birth of England’s foremost landscape designer, ‘Capability’ Brown. This summer’s visitors have had the opportunity to take part in a free-to-enter competition, with three age categories, to design a new landscape for the park/gardens. It runs until 5th September – hurry along to take part! The castle staff provide a blank ‘canvas’ and art materials in the gift shop.
]Everyone who walks in the gardens or down to the lake can create their own masterpiece for the future!

A new booklet published by the national conservation charity The Gardens Trust displays a photograph of Grimsthorpe Park on its cover: ‘The Planning System in England and the Protection of Historic Parks and Gardens’ Guidance for Local Planning Authorities. This useful document can be downloaded: www.thegardenstrust.org and explains the place of historic designed landscapes in the planning system, the importance of assessing significance, the statutory consultation obligations, and the role of both The Gardens Trust and the local County Gardens Trusts. Baroness Willoughby d’Eresby inherited the estate when her father, the Earl of Ancaster, passed away in 1983. The Grimsthorpe & Drummond Castle Trust was set up to run its circa 12,500 acres, and preserve it for the public benefit. The English Heritage Register Grade I listing will ensure that the national significance of Grimsthorpe Castle’s historic landscape is long understood, and the impressive views well managed and conserved for future generations.

On 13th September at 2pm, I will join fellow Lincolnshire Gardens Trust members on a guided circuit walk of the lake at Grimsthorpe, including the newly-restored causeway Red Bridge. Do join us! Find out more about the links between Brown, Grimsthorpe Castle, Joseph Banks’s family and Lincolnshire fen drainage. Discover how he met Bridget Wayet, his Boston-born wife, and how one of the worst winters on record, 1739, altered the course of his career. Refreshments and signed copies of my recently published book: Moving Heaven & Earth – Capability Brown’s Gift of Landscape will be available. (Booking essential: www.lincolnshiregardenstrust.org.uk ). As Brown moved from a yeoman background to become the country’s most famous landscape improver and ‘Shakespeare of Gardening’, let’s celebrate the inspirational part that Grimsthorpe Castle setting played, enabling Brown’s growing confidence and courage to achieve the greatest man-made setting in England at Blenheim Palace.