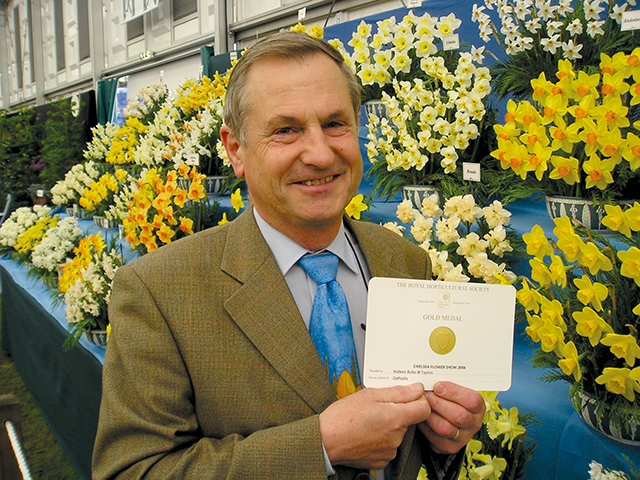 Johnny Walkers has exhibited daffodils at every Chelsea Flower Show since 1986. He tells Kate Chapman that although he’ll be attending the prestigious horticultural show again this year, it will be in a slightly different capacity – as a visitor.
Over the years he has won 29 gold medals – the last 25 of which were consecutive – at the RHS event, but now after a long and impressive career Johnny has decided it’s time to take a step back and enjoy a well-earned retirement, although even he admits his diary is still rather full as he plans to continue giving talks and judging.

“I started exhibiting daffodils at Chelsea as a way of showcasing the products I was selling through my mail order company Walkers Bulbs,” says Johnny, who lives in Holbeach.

“When it comes to planning for Chelsea, we would start the August before the show, which falls at the end of May, and it’s a very stressful time.

“When I thought about everybody else going out, sitting in the garden, enjoying the sunshine, I just thought what am I doing?

“I’m in the glasshouse stressing that the flowers are growing too quickly, stressing about watering them and going to the glasshouse two to three times a day to open doors and screens first thing in the morning; nobody else is worrying about these things.

“But now it’s time for a change, time to focus on some of the things I would like to do, although my diary still looks pretty full with judging and speaking commitments.”

Johnny’s passion for horticulture stems from his childhood, when he was brought up surrounded by the bulb industry.

His father came to south Lincolnshire in the 1930s from Holland, which was in the grip of a depression at the time. He wanted to learn the English language and stayed on after the war, when he was offered a job at HK Braybrooks, where he became a director.

“At that time it was tulips, gladioli and daffodils and then forcing and growing in the field; forcing at that time was big in this area, and picking flowers for the markets,” recalls Johnny.

“I was brought up with bulbs. Father was a grower, so I only ever knew working in bulbs. If I ever wanted any pocket money, I had to go to work on the nursery picking flowers, cleaning tulip bulbs; that was our summer job.”

Johnny studied agricultural engineering at Caythorpe Agricultural College and then went on to learn about glasshouse crop production at Oaklands, in Hertfordshire.

He returned home for eighteen months before joining bulb co-operative Selected Growers as a fieldsman, advising growers on all aspects of growing as well as setting up a quality control system.

Throughout the 1970s the company exported daffodils to Europe, and then Scandinavia and America, sending up to 3,500 tonnes of bulbs overseas. In 1986 Johnny decided it was time for a change and launched his own business, Walkers Bulbs, a mail order company selling daffodil bulbs.

To promote his new venture he began exhibiting at RHS shows including Chelsea and Harrogate and then in 1992 sold the company to Taylors Bulbs, in Holbeach, but carried on running and developing it.

“I never got into hybridising varieties myself, what I tended to do was go to a hybridiser and buy new varieties from them, something that I thought would be a winner for the cut flower market, the bulb trade, garden trade or on the show bench,” he explains.

“We would buy that variety when it was only available in small quantities, build it up and develop it into a marketable variety.

“New varieties that we have named have come from these. The first was Ffion Hague, when she was patron of the Voices Foundation. For every ten sold we made a donation to the charity.

“We did a similar thing after naming Georgie Boy in 2014 in honour of Prince George. We worked with The Royal Marsden Cancer Charity and donated £2 for every ten sold while two years ago, when the Queen was 90, we named one Gentleman at Arms, after a request from her official ceremonial bodyguards and presented her with a bouquet on her birthday in April.”

When it comes to showcasing his blooms, Johnny goes to meticulous lengths to make sure each stem is as perfect as it can be.

Although Chelsea is held in May, planning begins the previous August with Johnny choosing 150 potential varieties, of which around 70 will make it on to the stand.

One-hundred and fifty bulbs of each variety are harvested and put into a temperature controlled store at 22 degrees Celsius as dry bulbs in trays, where they stay until January.

After Christmas they are planted in compost, watered and put into another temperature controlled store at 10 degrees for up to fourteen days to root before going into another store where they are held at two degrees for a further thirteen weeks.

Three weeks before Chelsea they go into the glasshouse, then it is all down to Mother Nature as the flowers require the right amount of heat in order to grow properly. If it is too hot, they will grow too fast, says Johnny.

Around ten days before the show they are picked and then returned to the cold store before being transported down to London in a refrigerated lorry.

“I am a belt and braces person and always plant a lot more than I need or want, as things can go wrong – and they do,” says Johnny.

“We do 150 varieties and only use 70 on the initial display, I know that roughly 30 per cent of them will fail for one reason or another and it’s never the same ones each time.

“If it is very hot, the flowers will not last long so we will re-stage on Wednesday and Friday night as I have always said people who pay money to come to Chelsea should see as good a show on Saturday as the Queen sees on Monday.

“It’s showcasing our products, if I don’t have a good standard of product people are not going to order. They need to see perfect flowers, so they can see what they can expect to get,” he adds.
And now, after thirty-three shows, Johnny has decided to bow out while he’s on top, although he admits it might be a while before he gets to grips with the projects he has planned for his own garden.

He intends to carry on judging and is also available as a speaker to gardening groups and clubs with his talks ‘The A to Z of Bulbs’ and ‘Every Show Has a Story’.

“I’m very lucky; I’ve built up some wonderful relationships with customers, I’ve had the privilege of meeting the Queen twice and many other various and interesting people,” says Johnny.

“There have been a lot of highlights – winning my gold medals, supplying daffodils for the Royal Barge during the Queen’s Diamond Jubilee river pageant in 2012 and one abiding memory is attending a special garden party at Buckingham Palace for Royal Warrant holders.

“We were showing our daffodils alongside brands such as Jaguar, Burberry and House of Garrard jewellers, which was unbelievable, and eating smoked salmon sandwiches while sitting under an oak tree in the grounds of Buckingham Palace was something else!

“I’m very pleased with the success we’ve had and could never have imagined all that when I started out.”