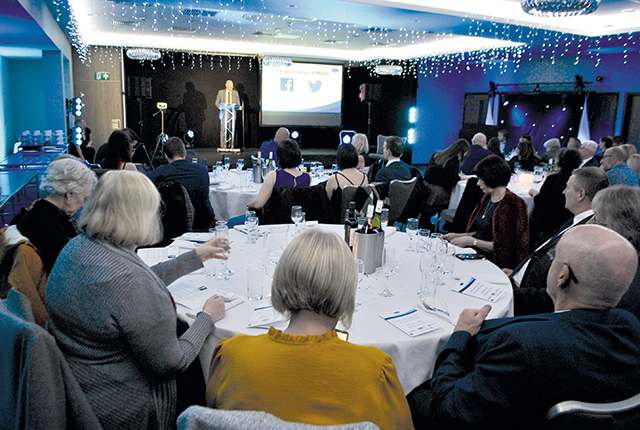 The Lincolnshire specialist housing provider recognised the hard work of its staff and volunteers at its 20th annual celebration evening.

The event took place on 29th November at the DoubleTree by Hilton in Lincoln, where staff, volunteers and representatives from partner organisations gathered to reflect on another successful year.
Special awards were presented to individuals and teams in six categories in which the winners had been chosen by a panel of LACE Housing colleagues.

Resident, Carol Bateman was announced as winner of the Volunteer of the Year award, sponsored by St Barnabas Lincolnshire Hospice, for her voluntary work for Friends of LACE Housing and at Olsen Court in Lincoln, while the Behind the Scenes award, sponsored by Amber Fire, was given to specialist housing manager, Emma Ward.

Sponsored by Shooting Star, the Good Idea award was presented to Vicky Black and Lisa Taylor for their introduction of new systems within the association’s payroll department.

This year, LACE Housing residents nominated 12 members of staff from across the association for the Customer Service award, which was sponsored by HCS Catering and given to support co-ordinator, Natasha Smith, who works at LACE Housing’s extra care scheme Olsen Court in Lincoln.

The Board of Management award was presented to asset manager, Phil Wilks by LACE Housing chairman, Bob Walder, who also presented this year’s Contractor of the Year award to Lincoln Security.
Volunteers and staff were recognised for their service and qualifications gained during the year.

Throughout 2019 the organisation has built 82 new homes for older people in Lincolnshire and raised over £4,000 for other charities including P3 Lincolnshire, St Barnabas Lincolnshire Hospice, Kids and North Hykeham Day Centre.

Nick Chambers, who celebrated 20 years as LACE Housing’s chief executive earlier this year and also received a surprise special award for service, said: “It is a privilege to work alongside an amazing team of staff and volunteers who strive daily to deliver quality services to the highest possible standard.”