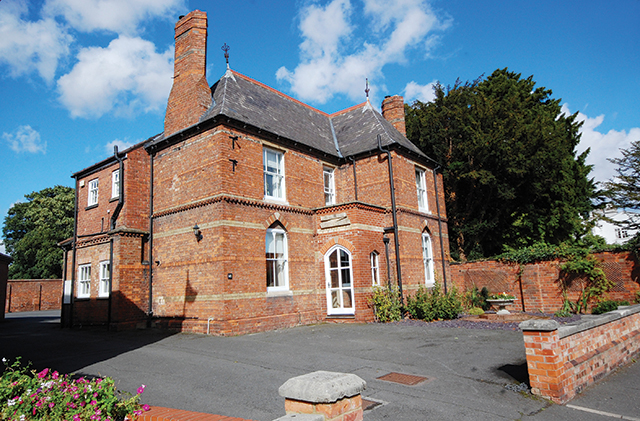 On the market with:
Masons Sales and Lettings

When Mandy Fuller viewed the Old Police Station on Eastgate, Louth, she recollects to Sarah Winstanley, she was immediately drawn to its history and unusual architectural features.
In fact she liked the house so much that she made an offer on the property straight away, even though her husband David, an educational consultant who was working away at the time, hadn’t even stepped through the front door.

But Mandy, who was born in Louth and has lived there all her life, knew it would be a great family home.

Mandy said: “We had sold our previous house in just three months and needed a place to live quickly or we had to go into rented. The Old Police Station was at the top of our budget but I thought I could just have a look on the off chance.

“When I walked in with my son Luke, we just loved the house for its history, quirkiness and space. I put an offer in immediately and when I told my husband, he just laughed. He knows what I’m like!”

The decision was a sound one however as the Old Police Station has been the family’s home for the last four years. The Victorian property was built as the town’s police station in 1866 next to the local magistrate’s court. The building, which sits in Louth Conservation Area, was a fully working police station until the 1990s.

Mandy said: “The building remained operational for well over 100 years and by 2007, it was significantly renovated into a residential property. The outline of the original cells remains and what was the exercise yard for prisoners is now incorporated within the main part of the house as the atrium. Built into the extension towards the rear of the property are the stables where the police horses were kept.”

The property features semi-open plan living areas with travertine flooring, deep archways, a large glazed lantern skylight, brick vaulted ceilings and an original cell door. There is a family room, music room, dining room, snug, reception hall with sitting room and rear lounge, a six-metre kitchen with Neff cooking appliances and a utility room on the ground floor. Steps lead down to a wine cellar with a glazed viewing floor panel in the music room above.

Upstairs, there are five bedrooms – three in the front wing and two in the rear – accessed by two separate staircases, making the house perfect for use by a family with annexe accommodation. There are two bathrooms and two shower rooms (one on the ground floor) and the house features panelled walls and ceilings in the three main bedrooms.

An interesting feature of the house is the original police station cells, which have been opened up to create a music room with a double brick vaulted ceiling and an original cell door with cast iron peephole, bolts, sliding hatch and an adjacent small angled window.

There is a parking forecourt at the front of the house and an enclosed garden at the back with a block paved patio.

Once the family had moved into their new home, they set about improving it by installing a new kitchen with units made by a local carpenter, a new utility room, new boiler, new roof and by fixing chimneys and fireplaces. Whilst the work was taking place, they uncovered the cellar by accident and found a Victorian boiler room with pipes running underneath the entire property. The couple decided to use the space as a wine cellar and installed a glazed viewing panel in the floor above.

The house is a well-known landmark in Louth. Mandy said: “A lot of people locally who have done work on the house have remarked that they have stayed the night here when it was a police station. Often they will walk round and say they recognise the rooms!”

The house has been perfect for Mandy and David, who have five children and eight grandchildren between them. Mandy, who has just qualified as a clinical hypnotherapist and life coach, said: “We have a large family and the house has been ideal for us all to get together. We have had a live band in the atrium twice – once for my husband’s retirement and the other time on 23rd December last year when we had a fancy dress party for family and friends, as we knew it would be our last Christmas in the house.”

She added: “I love spending time in the snug because it’s cosy and my husband likes watching sports at the other end of the house; we all meet up in the middle to socialise. We have a music room where my husband plays the guitar and Luke plays guitar and saxophone. We use the whole house as a family, although it could be used as a house with an annexe for a family with older relatives or teenage children.”

One of Mandy’s favourite spots is the garden. She said: “The garden is very secure as we have gates at the back of the property. I love the garden because it’s a sunny spot, easily maintained and peaceful. Our neighbours are the Old Magistrates Court, which is used by the council, and The Priory Hotel so it is very quiet here.”

The couple have now decided to sell their home to move to Lincoln to support their son, who will be studying for his A levels in the city next year.

Mandy said: “My son will be studying flexible hours, so rather than having to travel back to Louth it will be easier if we live in Lincoln.”