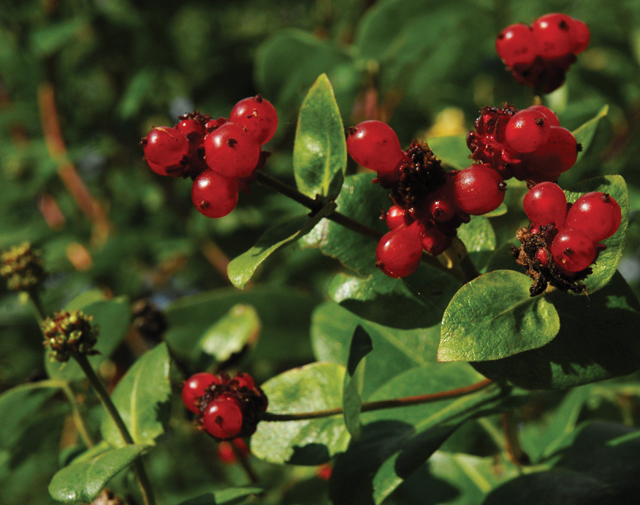 Steffie Shields highlights a few favourite garden celebrities to celebrate as summer fades
‘Back-end’ is a phrase that evokes a feeling most of us do not appreciate, not wishing to be reminded that summer is almost done, particularly since the memory of last year’s extra harsh winter has scarcely faded. Despite being the tail end of fresh air and outdoor living that relaxes and lifts the spirits, signalling less slowing-down time for spending with family and special friends, and fewer long evenings with a glass of wine in the hand, September is an extra special month to savour. The garden is often where we read the weather, rain or shine, damp or drought. You can guarantee when the children are back in school, and harvest is in, the rain dissipates, clouds roll back, winds die down, and a pleasing calm descends. Any long, Indian summer, sun-filled days seem an added bonus.

Look forward to enjoying the real fruits of your labour; there may even be enough to share with chums. Apples, pears and plums are swelling handsomely, beginning to blush and warm as they ripen, a riot of berries reddening on all sorts of shrubs and trees – rowan, holly, pyracantha, rosehips, blackberries. If you haven’t got enough room for fruit trees try low-growing step-over varieties trained along horizontal canes or low walls. You could join a voluntary community orchard scheme such as Cross O’ Cliff Orchard in Lincoln. It would be wonderful to reverse the staggering decline in orchards. So, many congratulations to Stamford Community Orchard for winning a star prize in this year’s Lincolnshire Environmental Awards for reviving and conserving many old, local varieties of fruit trees with the help of volunteers. Interested groups – and even schools – could follow suit, perhaps even regenerating some walled gardens lying idle and neglected. Back in the eighteenth century, antiquarian Dr William Stukeley once described the country area south of Grantham: ‘… hereabout is thought to be the Montpelier of England’. There can be no nicer feeling, knowing that there will be something delicious to harvest and eat direct from a vegetable patch, orchard or allotment, almost better because it seems free; above all, however, fresh and flavourful through not being transported from Outer Mongolia.

Herbaceous borders are pulling on a more autumnal patchwork quilt of russets, golds, maroons and mauves. Butterflies are particularly active now – and fun to watch – fluttering from flower to flower, seeking out sedums, and wispy wands of purple florets, Verbena bonariensis. If you have not visited a great garden recently, any number of gardens open for charity will have rich shows of colour and texture, often laced with silken cobwebs. One September perennial, Aconitum carmichealii, has spikes of hooded blue flowers not unlike a delphinium. Look out for Caryopteris, a small, hardy deciduous shrub with a cloud of hazy-blue flowers and grey-green, lance-shaped leaves, always appropriately dressed for Battle of Britain Day, 15th September. The hybrid Caryopteris ‘Worcester Gold’ has attractive lime-green leaves fading to gold. There is still time to head south to visit Grimsthorpe Castle, Easton Walled Gardens, or Belton House, as well as Doddington Hall, Saxby House, Goltho House, Normanby Hall and Elsham in the north. I guarantee their theatrically long borders will be breathtaking, uplifting and inspirational, sparking ideas for your own garden.

Make a note to invest in a few seeds of annuals to sprinkle in a border next year, as fillers for any gaps. Take Cosmos, for instance, a daisy-like annual with yellow-centred white, pink or cerise flowers and delicate, ferny leaves, still flowering its socks off. My favourite late-summer flowers, also white or a paler pink, are long-stemmed Japanese anemones, Anemone hupehenis. Their rounded petals with limey-green centres, surrounded by a crown of gold stamens, prevent these perennials from being too sugary. Tall, eye-catching and vigorous, they are easy to grow, flowering for weeks on end with as many as fourteen or fifteen flowers per branching stem. Japanese anemones need no other special care, just cutting back when the first frost blackens the leaves. Even if left, the rounded spent umbels look decorative when dusted with frost or snow. What is more, Japanese anemones cope with drought and look attractive in dappled shade, lining either side of a woodland walk. Their fibrous roots sucker and run, and can be invasive, so best to place them where there’s space for a good clump – preferably towards the west – to be able to enjoy the silhouettes of petals back-lit by the low, late afternoon sun. Anemone x hybrida ‘Honorine Jobert’ with single flowers of the purest white, slightly pink tinged on the reverse, is simply dazzling.

I used to hate those over-large, autumn-flowering crocus. Their shiny, generous leaves appear early in the year and then die down. Come September, the flowers push up on long pale stalks. They seem out of place, ‘naked ladies’ at the wrong time of the year – surely crocus equals spring. When we moved to Welby a group of autumn crocus suddenly appeared near the gate and, on close examination, were particularly striking, pinkish purple and unusually patterned. I had never seen a chequered flower before! Referring to my horticultural encyclopaedia I discovered them, Colchicum bivonnae, also known as Colchicum sibthorpii, probably named after the famous eighteenth century botanists of Canwick, Professor Humphry Sibthorp or his nephew John. A couple of summers later, I chanced on some corms of autumn crocus at a charity plant stall. I decided to plant them immediately, to naturalise among grass in the orchard part of the garden, in a circle around a newly-planted Victoria plum tree. It was not long before one vigorous variety, Colchicum speciosum ‘Album’ put in an appearance, each perfect flower a long goblet, pure white. The other double flower, aptly-named Colchicum ‘Water Lily’, is just as ostentatious. Both are thankfully weather–resistant.

This month I love to go out every day looking for the first sign of autumn crocus that, as the years roll by, are quietly multiplying. So I have changed my mind about them: I know the sudden surprise show will not disappoint, better than asters, dahlias and chrysanthemums put together. Perhaps, in her wisdom, Mother Nature has decided to allow a frisson of spring in September, to cheer us up by prompting thoughts of awakening spring through the darker, drab winter months. Poet John Keats waxed lyrical about September’s mists and mellow fruitfulness, but as swallows gather for the off some star plants are enjoying their ‘back end’ moment of glory in the maturing sun.