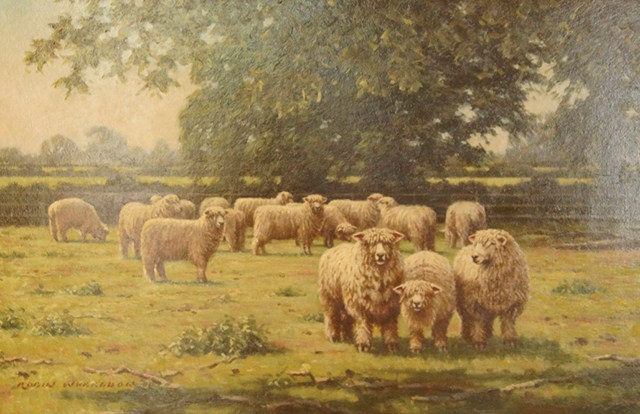 Each of the three viewing days was well attended by both local and international buyers.

Day One consisted of jewellery, silver, clocks, ceramics and collectables keenly contested with buyers both in the marquee and bidding online. There were two highlights: Lot 596, an early nineteenth-century English porcelain teapot and Lot 415, a Fribourg & Treyer pottery tobacco jar, which each made £800.

The late Euan Robertson was a keen art collector and had two impressive collections of Lincolnshire artists Peter Brannan (1926–1994) and William Bartol Thomas (1877–1947), which were included in the 172 lot specialist evening art auction. Sale highlights here included an oil on board by Robin Wheldon, Lincoln Longhorn, which sold for £420 (Lot 753); an East Coast beach scene by Peter Brannan (Lot 770) which sold for £650 and Boston Marketplace by
WB Thomas (Lot 809) which nearly doubled its top estimate, selling for £900.

By the end of Day One the auction total stood at six figures and Day Two saw equally impressive competitive bidding for the furniture, garden statuary, prints and books. Highlights included Lot 1121, a William IV rosewood open bookcase, which sold for £1,400 and Lot 1415, a print of the Norfolk MP Thomas William Coke inspecting South Down sheep, which sold for £650.

The auction was a near 100% sell-out, breaking records for attendance on view days, buyers on saledays and the number of online bidders.

Colin Young, auctioneer and managing director, stated that the sale was a privilege for the firm, showing the teamwork of the senior valuers, saleroom managers and office staff. The firm sold the contents of Mr Robertson’s Leadenham house in 1987 and thirty years after Golding Young provided an equally successful sale in the modern world, combining online technology with a traditional country house auction.