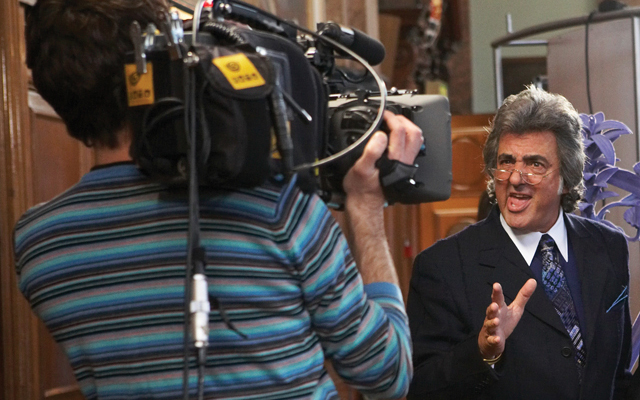 Golding Young Thomas Mawer’s Lincoln Auction on the 16th February hosted the filming of David Dickenson’s ‘Real Deal’. Whilst the company’s other auction rooms in Grantham regularly feature on television this was the first visit to Lincoln by David Dickinson.

The format of the programme is for the general public to be invited to bring their antiques and collectables to either sell directly to dealers or to be entered into auction in the hope they receive a higher price.

After a visit to Lincoln by the production team last year the date was agreed and filming started at a valuation and dealers day at the Lincoln Showground on Saturday 29th January. Over 200 people attended with a wide variety of items, many deciding to consign their goods to auction. Auctioneers Colin Young and John Leatt were on hand to assist and our specialist removal firm transported the goods to The Lincoln Auction Rooms on Portland Street.

At the Auction Rooms the goods which included jewellery, Oriental porcelain, pictures as well as a fine pair of coach lamps and a George III microscope were catalogued. In all twenty-one lots were included in the 980 lot auction.

On the auction day the production team set up and the ‘Real Deal’ lots were offered every ten minutes to allow the different contestants to be moved in front of the cameras to watch and react to their lots being sold. A feature of the production is to film more than one programme per auction so timing and organisation are critical. The cameras and lights certainly add to the atmosphere of the auction as does the occasional round of applause.

Of the twenty-one lots offered two made over £1000, nineteen made over the estimate with one achieving four times the owner’s expectation.

The programmes are scheduled for broadcast in June.