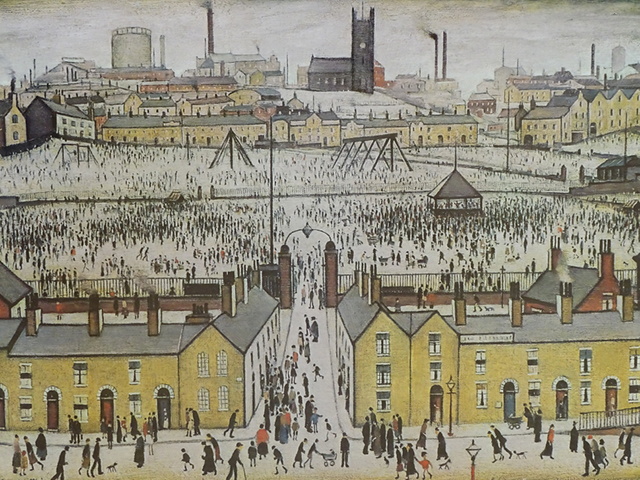 It was a telephone bidder who took the top lot – £9,500 for three oil paintings by the Yorkshire artist Anne Isabella Brooke.

Brooke studied at both the Chelsea and Huddersfield Schools of Art. Since her death in 2002 only twenty-six paintings have been offered at auction with prices steadily rising from £90 in 2006 to multiple four figures.

Within the 19th century section an oil painting by Walter Hunt sold above top estimate for £2,800. This typical farmyard scene in oils was signed and interestingly inscribed ‘To Mrs Stannidge with Walter Hunt’s compliments, Oct 16th 1904’. It is to be hoped that Mrs Stannidge was as happy with the picture as the new owner.

Another Victorian artist, Arthur Wardle saw a doubling of the top estimate for an oil painting titled Waiting for the next one selling for £2,600. Clearly the appeal of the Jack Russell outshone the duty of the task.

LS Lowry continues to attract record bids and an artist signed coloured print Britain at play trebled the top estimate with multiple telephone bidders competing to a final bid of £5,400.

Local artists continue to command great interest, none more so than Vincent Haddelsey. The oil on canvas titled The Shoot was consigned by a vendor out of the county and bought by a buyer out of the country for just over the top estimate of £650.

Full results of the auction can be found at www.goldingyoung.com.