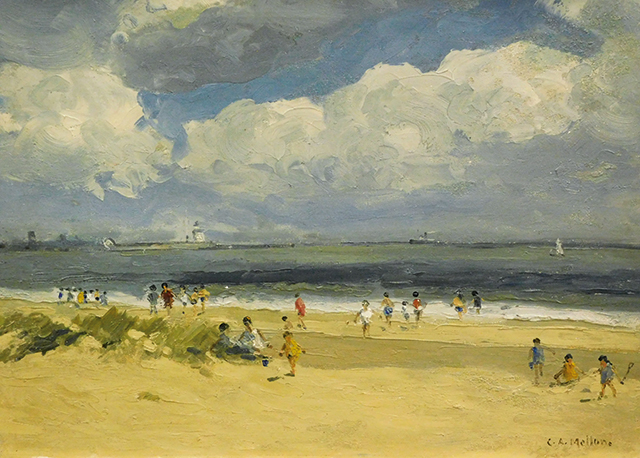 These limited edition coloured prints are images of some of the most important pictures by the Manchester and Salford painter, and each is signed either in pencil or pen by the artist within the margin of the print.

A collection of seven prints were consigned by a vendor from Welton, Lincoln and totalled £12,100 with top price being shared by Peel Park and The Cart; each sold for £2,400.

A collection of pictures consigned by a Nottinghamshire vendor consisted of eight pictures by the artist Campbell Archibald Mellon – sometimes known as East Anglia’s LS Lowry. Born in 1876 he moved and worked in Nottinghamshire from 1905 until his death in 1955. He produced landscapes and seascapes in oils, evoking a sense of the English summer day and trips to the seaside. He is best known for his Norfolk views, especially of the seaside town of Gorleston. Top price here went to such a view, selling for £1,650.

The top price of the auction and the highest over estimate went to a portrait of a young girl holding a flower by the Maltese artist William Apap. Born in Valletta, Malta in 1918 into an artistic family, Apap produced a wide variety of paintings, including portraits. His most famous work is a portrait of Her Royal Highness Princess Anne. Due to the personal nature of portrait work a modest estimate of £300-£500 was placed on the picture pre-sale. This proved far too conservative, with the picture eventually selling for over ten times its bottom estimate to a bidder for £3,400.

Another portrait picture in the 19th century section of the auction also exceeded its top estimate; simply titled Siblings, its commercial appeal saw the hammer fall at £1,350. A 17th century Dutch School oil on canvas of figures dining outside also sold to a South Lincolnshire collector for £2,100.

Within the local artist section £320 was paid for a study of a young woman by Thomas George Storey (1865-1935), a former pupil of the Lincoln School of Arts.