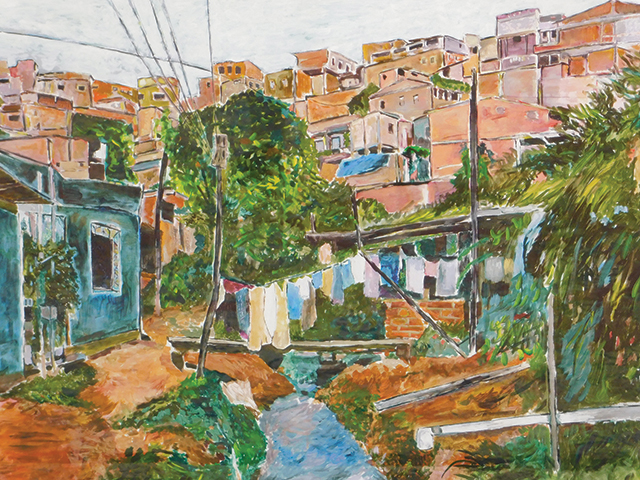 Paintings from international artists made a six-figure sum at the August Fine Art Sale, held at the Lincoln auction rooms of Golding, Young & Mawer.
The saleroom was packed with potential bidders and over 240 buyers were registered to bid online at the start of the sale at Thos. Mawer House on Station Road, North Hykeham.

Auctioneer, William Gregory MRICS said: “Both modern and traditional paintings fared very well in the sale which attracted high numbers of UK and international buyers registered to bid before the sale. We are delighted with the results achieved for our vendors.”

Highlights of the sale included a signed watercolour titled New York by the Uruguayan artist José Gurvich (1927-1974) which sold to a buyer for £9,000. The painting belonged to a private vendor who had researched the artwork and was undecided whether to sell it through a gallery in New York or take it to auction.

Gurvich was born in Lithuania to a Lithuanian Jewish family. The family fled religious persecution, emigrating to Uruguay when Gurvich was 4 years old. He studied at the National School of Fine Arts in Montevideo and subsequently joined the studio of the famous painter Joaquin Torres Garcia. He was a painter, potter, musician and a key figure in the Constructivism art movement. In 1970 he moved to New York with his wife and son and died there four years later aged just 47. The Museo Gurvich in Montevideo, Uruguay has an extensive collection of his work.

Meanwhile a collection of the works of the Victorian artist Thomas Sidney Cooper (1803-1902) sold for almost £39,000. The collection of eight oil paintings, four watercolours, a drawing and some reference books were amassed from the UK, America and Switzerland by one collector over almost fifty years. The highlight of the collection was an oil on canvas titled In the Whitehall Meadows Canterbury which was painted in 1832 and sold for £9,000. An oil on canvas titled To Market in a Snowdrift (The Wintry Road to Market), which was exhibited at the Royal Academy in 1888, sold for £7,000, an oil on canvas titled A bull and seven cows on the bank of a river – evening in Marshes near Canterbury made £6,500 and Sheep grazing on the south, dated 1889, sold for £3,800.

The first lot of the sale, an oil on canvas titled Florence View by Giovanni Signorini (1808-1864) sold for £4,600. The painting had been brought into one of the auction house’s free Friday morning appraisal clinics by a private vendor.

Works by the artist Laurence Stephen Lowry (1887-1976) continue to attract a lot of interest in the art market with two artist signed coloured prints titled Britain at Play and The Pond selling for £3,600 each. Meanwhile, works by the musician Bob Dylan generated a great deal of interest in the saleroom with three limited edition giclée prints from The Brazil Series titled Favela Villa Broncos, Ranchers and Boxing Gym selling for, £1,200, £850 and £1,100 respectively.

A collection of pictures from the estate of Mrs Limb of The Estate House on The Avenue in Harwood, near Leeds were included in the sale with lot 4, a painting by Johannes M Fastin Wilhjelm (1868-1938) selling for £1,600 and an oil on canvas half-length portrait by Christian Krough (19th/20th century) titled Greda Christensen selling for £1,800.

Amongst a series of artworks by popular Lincolnshire artists, a watercolour by Peter de Wint (1784-1849) titled Newark bridge and castle was purchased by Newark Town Hall Museum and Art Gallery for £3,000. Four paintings by the Lincoln artist Alfred Ernest White, including Lion’s Statue and one other of Lincoln’s Arboretum, High Bridge and Castle Square in the city, sold for £285. Meanwhile, a watercolour from the estate of Richard Epton of Pottergate, Lincoln, titled Little Sampford Church near Great Bardfield, dated 1955, sold for £4,800.

An oil on canvas titled Portrait of a young woman signed by the Nottingham artist Noel Denholm Davis (1876-1950) sold for £1,000, double its presale estimate.

Full results from the sale can be found online at www.goldingyoung.com