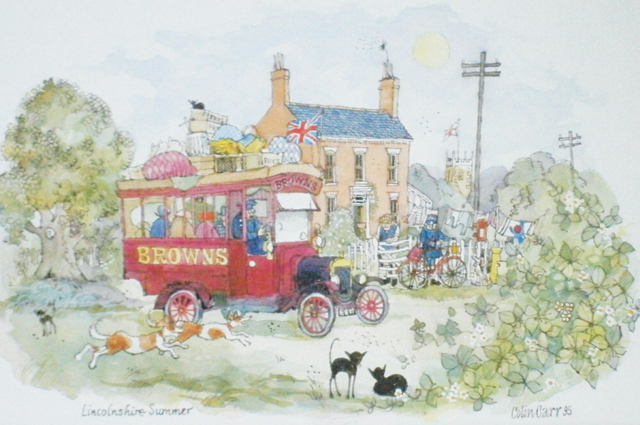 When a collection of watercolour paintings of Lincolnshire scenes by a well-known Grimsby artist went under the auctioneer’s hammer, it was sure to attract local interest.
Colin Carr (1929 – 2002) studied at Grimsby School of Art and was the editor of Lincolnshire Life, as well as art editor of This England. A freelance artist, he specialised in book illustrations, record sleeves and greetings cards.

He produced hundreds of nostalgic and humorous paintings with whimsical characters, many featuring his black cat and the local bobby. His work is featured in several public and private collections – Mrs Thatcher was said to own one – and he was once presented to the Queen and Duke of Edinburgh when one of his paintings was given to the Queen by the Chief Constable of Lincolnshire Police on the official opening of the new police headquarters in Lincoln.

The collection of paintings had been amassed over the years by long-serving councillor and Mayor of Grimsby, the late John Colebrook and took pride of place on the walls of his home. His collection featured in the evening Fine Art Auction at auctioneers Golding Young & Mawer on 23rd October.

The most hotly contested picture in the collection was ‘The Grocery Shop, Caistor’, signed and dated 1995, which made a hammer price of £260 and ‘Lincolnshire Summer’ which was signed, titled and dated 1995, sold for £170. The prices reflected a strong collectors’ market for paintings by the well-known county artist.

For Mr Colebrook, Colin Carr’s work reminded him of the home town he loved and from the level of interest at the auction, there are certainly plenty of Lincolnshire collectors keen to be reminded of our wonderful county too.