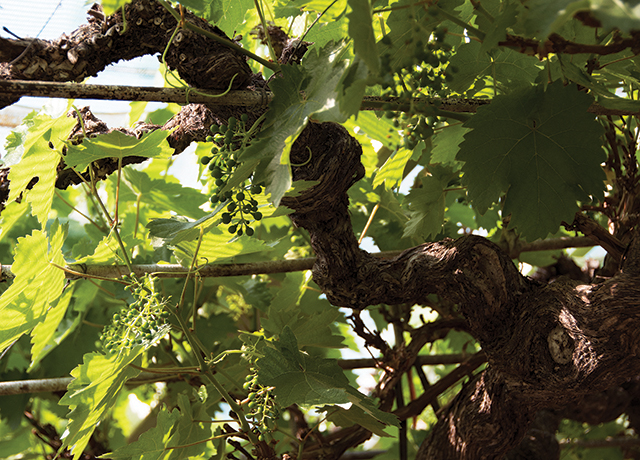 Steffie Shields celebrates the 150th anniversary of Hackthorn Hall’s vintage vine.
Grapes have been grown, on and off, in Lincolnshire since the Roman occupation. Vines flourished in the warmer medieval period. Several old vines with character linger on, some long neglected in broken down glasshouses. However, the venerable Hackthorn vine has always been well cultivated. Its singular, rather exotic, even biblical presence demands attention. It seems somehow fitting that the nearby church of St Michael & All Angels is in sight, over the kitchen garden wall, and the heavenly peace only interrupted by gentle birdsong or bell-ringing.

Current head gardener, Keith Donner, together with his equally dedicated predecessor and mentor, Donald Moore, were sitting chatting on a bench in the sunshine when I arrived, a sight seldom seen! Head gardeners are normally on the go from dawn to dusk with a multitude of tasks. They told me how the south-facing, sloping three-sided kitchen garden drains well and is watered by springs. The tall, warm-red brick walls were built in the late eighteenth century, about 220 yards north-east of the new hall, above the site of the old hall near the lake, with the south end left open specifically to allow frost to roll out.

“The answer lies in the soil.” I remember hearing this advice on the radio, famously and regularly emphasised by the team of gardening experts on Gardeners’ Question Time. Just as critical as aspect and conditions of location, a vine needs year-round tender loving care. Donald, in charge for fifty years, and Keith in turn, have nurtured this 150-year-old living legend for nearly half its life. Both admitted that they often talked to ‘their baby’, planted in 1868 by Head Gardener William Popple. They believe it to be the oldest vine in Lincolnshire, and possibly the second oldest in the country to the celebrated vine planted exactly 100 years earlier at Hampton Court by Lancelot ’Capability’ Brown, the royal gardener to George III. Can it be mere coincidence that this year both vines, the same variety of sweet dessert grapes, Vitis vinifera ‘Schiava Grossa’, or ‘Black Hamburg’, share significant anniversaries?

Had Mr Popple heard about the capability and longevity of Brown’s famous royal vine, 250 years old this year? In 1768, ten years after banker Charles Raymond planted a vine at his Essex home, Valentine’s, a slip was taken, and the cutting heeled against the outside wall of William III’s ‘exotics’ greenhouse situated in a secluded corner of the ‘Privy Garden’ at Hampton Court. As it grew, Brown advised its branches should be trained inside for protection. Since then it has outgrown and needed six new glasshouses! Hence, in Victorian times the extension method, with one vine filling an entire glasshouse, was thought to produce a larger crop.

According to a metal plate proudly displayed over the door, Hackthorn’s ‘state of the art’ long, lean-to glasshouse was completed in March 1867 by B. Wheeler of Nottingham, Horticultural Builder. In 1768, on the young vine’s arrival, probably bare-rooted, Mr Popple elected to plant it free-standing, unusually, in the centre of his brand new vine-house. It took forty years for the vine to fill the entire space. It has not proved quite as vigorous as the royal vine, which after 120 years, in 1887, measured 4ft around the base, conveniently sustained by its roots reaching down into the palace sewers.

Today Brown’s vine is 13ft round the base, the longest rod stretching an amazing 120ft. In 2017, according to the Guinness World Records, the world’s oldest vine still producing fruit was confirmed as growing in Slovenia, dating back four centuries! Hackthorn’s vine, remaining confined by its original glasshouse, has endured 150 winters, and 150 ripening summers. Its twisted centre stem measures 33in, just shy of 3ft, its old arms now tied up to support the weight. Whether the more northerly location has affected growth, the vine-house still gets fiercely hot inside, so as well as opening windows, blue shades help to moderate the temperature.

Keith allows only seven rods so as not to stress the plant and to cut down on labour-intensive work. In spring he applies an even-balanced liquid fertiliser and attends to ventilation to keep a warm air flow. Not a single day goes by without checking the veteran climber’s irrigation or looking for scale insects or signs of powdery mildew. He burns sulphur, the same method as Popple’s, before him. Vaporising sulphur crystals in tins, melted by electric element, hang from the branches to fumigate and protect against mildew, the chains afterwards coated in fascinating shards of crystals.

Immediately after flowering, when the fruits are set, Keith administers a high potash feed, before reducing the number of bunches. After thinning remaining bunches, he goes on to remove summer leaves to allow sunlight to ripen fruit. All being well, grapes are served in the hall from the second week in September. Depending on the weather gods, they keep well on the vine right through until November. Dead wood is then taken off, with the characterful, gnarled branches, often at least fifty years old, coveted for use by grateful local flower arrangers. In December, with weather cold and the vine dormant, Keith prunes back fruiting spurs to one or two buds.

Donald’s Hackthorn roots go down almost as deep as the vine. He can still remember his Victorian predecessor, William Popple, who came to the village the same year as his grandfather. Both men died in 1941, in the same week. He also recalls proudly being on parade at RAF Oldenburg in Germany in June 1953, Trooping the Colour abroad to celebrate Queen Elizabeth II’s coronation. After his National Service, Donald returned and has never left. In 1972, he took charge of the Cracroft-Eley family’s splendid gardens with one girl assistant. One year, to his horror, there were no grapes. It took three weeks to wash the vine with soft soap and scrub every bit with a toothbrush to remove mildew spores.

Keith admits to finding it hard to leave the vine, treating it as an old friend which he is “keeping going for the next generation of gardeners.” Sometimes he must remind himself that other jobs await his attention. Visitors find it incredible that the man in charge has no other help in growing a vibrant, rainbow sea of cut-flowers and a multitude of fresh vegetables in this vast, yet impeccably neat heritage garden. As I left uplifted, presented with a huge armful of crimson, pink and plum Sweet Williams, Keith was happy for Donald to have the last word of satisfaction: “It’s doing itself proud this year.” Keenly eyeing copious bunches of set fruits, he heralded “a bumper crop to celebrate 150 years!” The vintage living legend at Hackthorn Hall is in safe hands.

On Sunday 2nd September (1pm-5pm), Hackthorn Hall opens with the kind permission of Mr and Mrs William Cracroft-Eley for its 91st year, in aid of Hackthorn Church.