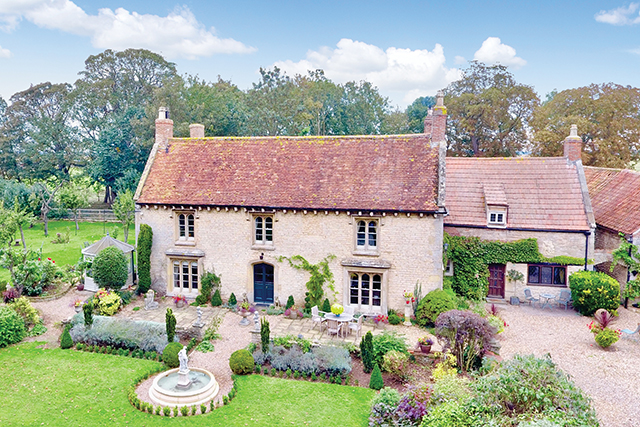 On the market with:
Mount and Minster, Autumn Park Business Centre, Grantham NG31 7EU at a guide price of £775,000

A handsome, period residence in the heart of the Lincolnshire countryside, Brauncewell Lodge is an ideal, spacious, family home which also has a fascinating histor
Owners, Alan Doyle and his fiancée Christine Brocklebank, share a mutual love of restoring period properties. Alan is also a collector of English oak period furniture. A wish to be closer to family and find another home which would complement his collection led them, three years ago, to relocate from a Tudor property in Norfolk to the 17th-century beauty of Brauncewell Lodge.

“We fell in love with this area as well as the Lodge,” said Alan. “Brauncewell is a small hamlet set in secluded countryside between Sleaford and Lincoln but with easy access to some wonderful villages, restaurants and other fine local amenities.

“The Lodge, a Grade II listed building which was originally a farmhouse, needed renovation and repairs but we have always enjoyed projects of this type. We like the challenge of restoring a property, making it suitable as a contemporary home while respecting the original materials, features and appearance of a heritage building.”

The previous owners of Brauncewell Lodge had purchased the house from the estate of the Marquis of Bristol in 1978. The Hervey family owned land between Sleaford and Lincoln from the 17th century up to the 20th century. The property was used as a hunting lodge for the estate and later as a ‘party’ house by subsequent generations.

The Lodge is approached by a sweeping driveway with double wrought iron gates and set within an acre of landscaped gardens and grounds.

“There has been so much to do,” said Christine. “We began with some major works such as rebuilding the chimney and restoring the Victorian arched, sash windows. The house was given a Gothic makeover to the front elevation in the early 19th century with square bay windows with moulded parapets, and we have been able to restore that frontage to wonderful effect.”

Carpets have been replaced in many rooms with larch wood flooring or foot worn stone in keeping with the antiquity of the property. All the bathrooms were replaced, while the existing bespoke pine kitchen was enhanced with a Victorian pine corner cupboard, Delft rack and new Villeroy & Boch sinks with limestone chopping block.

Alan and Christine have ensured that the property’s great abundance of original features have remained in place including beamed ceilings, a bread oven in the kitchen wing, 17th-century cupboards and fireplaces.
The accommodation now offers everything that a family could want from a home. On the ground floor there are four reception rooms. The main entrance leads into a reception hall with access to the living room and dining room. To the rear of this floor are the drawing room, a large kitchen/diner as well as breakfast room, utility, cold store, larder and WC.

Stairs leading from the hall lead to the first floor where there are five spacious bedrooms. The master bedroom has a large dressing room with built-in wardrobes and all the bedrooms have access to a family bathroom and separate shower room. A second stairway leads from the hall alongside the utility to bedroom five and the first floor.

Brauncewell Lodge is a beautiful period home in a wonderful rural setting and within the grounds there is an attractive studio suitable as a home office or garden retreat. A two-storey barn offers further opportunities as a workshop space or entertainment/games room. The double garage has separate doors for each vehicle.

“Once we had completed the house renovations,” continued Christine, “we turned our attention to the garden. The landscaping and planting is now complete. There is a large paved and gravelled patio, which captures plenty of sun and warmth; perfect for outside entertaining. There are more formal areas of planted beds at the front of the Lodge, with lawns and mature trees and shrubs as well as an orchard within our acre of grounds. It really is idyllic here with wildlife in abundance and the summerhouse is a perfect place in which to sit and just relax.”

Like many couples who enjoy property renovation, Alan and Christine were not looking to move necessarily but they have seen an older period home which will be an even more fitting location for Alan’s collections of furniture.

“I suppose we will be downsizing slightly,” said Alan, “but it is the style and period of the property which has so attracted us. We love this area so will not be moving very far from here at all.”

Brauncewell Lodge is now an ideal family home which enjoys a peaceful, countryside location but also offers easy access to neighbouring Cranwell which has a host of convenient services including a primary school, village shop, post office, general store and newsagent. Sleaford is less than six miles away and offers access to a train service, as well as outstanding secondary schools, a town centre and choice of supermarkets, public houses, restaurants and cultural amenities. Grantham, Newark and Lincoln are within easy driving distance and are accessible by rail via Sleaford.

Alan and Christine will miss the garden at Brauncewell Lodge and the peaceful location but now they are also missing having an ongoing project. Their next property will be slightly smaller but no less painstakingly restored to be their – and their furniture’s – perfect home.