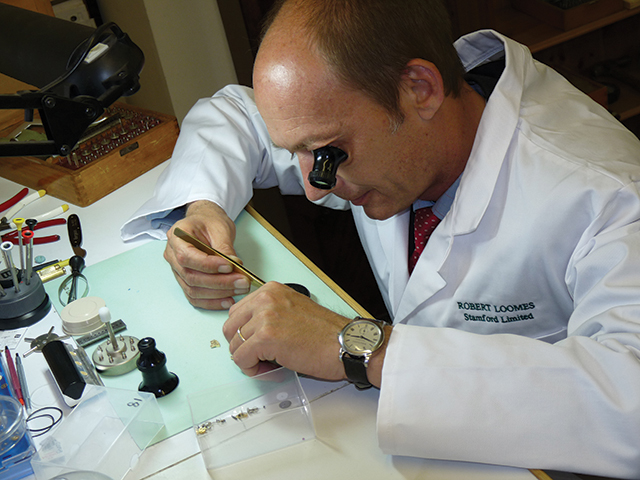 Loomes of Stamford is one of England’s last remaining traditional watchmaking businesses. In their Lincolnshire workshops, a team of a dozen skilled craftsmen and women both make and repair clocks and watches.
This family run business can trace its roots back as far as Thomas Loomes of London. In the 1640s and 50s he ran the largest clock and watchmaking business in London. Loomes have been based in Lincolnshire since 1993. For the last ten years they have filled all four floors of the old Stamford gaol, part of the original civic buildings of Stamford and dating back to before 1588.

Loomes are one of only a couple of firms who can make their own mechanical watches from scratch and their designs have won international acclaim.

“The Swiss mastered mass-production, so their training is quite unlike ours,” Robert Loomes explained. “Over here we are still taught by the British Horological Institute in Newark. They insist that, in order to join the professional register of repairers, you should be able to make any and every component. The

Swiss are so used to specialisation and having spare parts on the shelf. We have a very different and superior kind of training in Britain.”

For decades Loomes have been well known for antique restoration work. Equally happy working on modern clocks and watches, Loomes started manufacturing their own watches ten years ago.

Managing director Robina explained: “At first we built watches using imported components. We were amazed at how popular they were. It just made us determined, however, to make them using British components.”

Loomes produced their own prototype components for every single part of a watch, winning awards and vital research funding along the way. Eventually they were able to produce their Robin range of watches, entirely made in England.

These steel or solid gold watches feature dials from Lincolnshire, straps from Leicestershire, specialist seals from Northamptonshire, gaskets from Norfolk and steel hands from Cambridgeshire. Loomes were determined that local expertise already existed, they just made it their mission to find those firms and persuade them to help.

This year Loomes are launching their Lincolnshire wristwatches. Going back to their roots they are using imported components, fitted into their own cases and dials. These are the first Loomes watches with a centre seconds hand. The designs are worked up on the top floor, where the artists split their time between designing watch dials and restoring old clock and watch faces.

Down on the lower ground floor, eerily close to the waters of the River Welland, each watch is meticulously built from scratch by a team of highly experienced watchmakers.

Every watch is tested for days, sometimes weeks before the team are happy to let it go out to the owner. Such rigorous testing would be impossible for most companies. For Loomes, who make around a hundred watches a year, it is a matter of course.