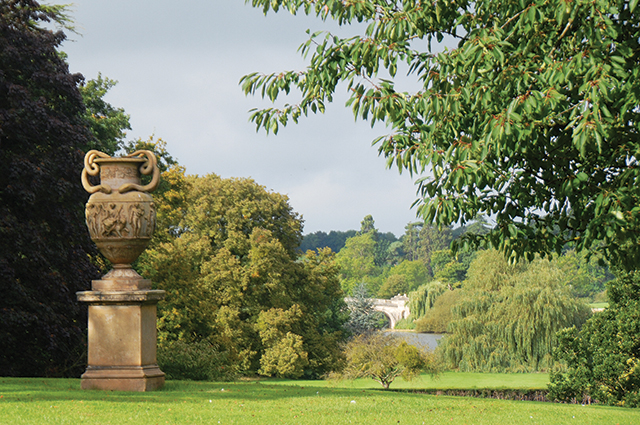 Steffie Shields explores gateways, garden ornaments and the new ‘Layers of Landscape’ Project.
March has arrived, long-awaited gateway to spring! Let’s emerge from winter hibernation and seek excitement, fresh air and fitness at the first sprinkling of pale pink winter blossom, carmine flowering currant and delicate, lemon-yellow forsythia and mahonia. Limey-yellow hazel catkins hang like pairs of fairy socks on a washing-line to offset now berryless holly and brooding cypress. Nature is slow to get her act together and is only just unwrapping her sweet-shop buds, mainly at ground level. Most trees, barren and dormant, are still waiting their moment.

When all around was still drab greys and endless green, European gardeners invented plant theatres to both display and protect their prized tulips and exotics collections from early spring frost. Victorians invested in colourful, outdoor auricula theatres or turned their storm-uprooted trees into sculptural stumperies. At Easton Walled Gardens, Lady Ursula Cholmeley, ever-creative, has another twist. She displays a variety of small, colourful and unusually-shaped ornamental gourds, classified as Cucurbita pepo var ovifera, the same family as pumpkins and squash, to fascinate passing visitors at eye level.

Weather plays a hugely affecting role in our work and leisure activities. Farmers and gardeners watch forecasts, observe signs and utter the oft-repeated adage: “In like a lion, out like a lamb”, or, winds and weather depending, vice versa. Garden ornamentation plays an invaluable role in lifting winter and early spring spirits by framing views, focusing minds, adding form, texture and sense of place. Lions, eagles, hounds and owls, with strong features and potent symbolism, feature on many a gate pier or garden plinth. At Burghley, a great decorative urn creates a predictably impressive year-round ornament. Later a stag lurking nearby amidst pleasure ground trees comes as a complete surprise to trick the brain into questioning: “Could it be real?”

Gateways can be a history lesson in an instant. Take a moment to notice the huge variety of entrances welcoming you once again to the county’s best parks and gardens. They play a useful and eye-catching role in conveying the story of the setting, as if a preview to the main act heralding its heritage – Roman classical or medieval Gothic, rustic or contemporary. Gate piers with pine cones, resting on acanthus leaves, suggest eternity, and are not to be confused with pairs of pineapples signifying welcome. Hospitable plantation owners in the Caribbean used to stick these exotic fruits on their gateposts to indicate that they were ‘At Home’ and open to visitors.

Guess the period when the gate or archway was first constructed and you begin to appreciate the lives of those who created the garden. The drive to Coleby Hall, for instance, is straddled by a ‘Roman Arch’, built by Thomas Scrope in the eighteenth century, to echo of the genuine Roman Newport Arch in Lincoln. Impressive whalebone ribs serve as the most unique, almost natural archway, still seen at Laundon Hall in Threekingham. Even on the dullest day, grand entrances give us something interesting to ponder. Many readers will be as dismayed that late last December, a careless truck-driver dismantled one of the finest in the county. The elaborate, gold embossed, wrought-iron gateway to Fulbeck Hall, complete with bull’s head and family crest, date from 1733, when Francis Fane built the hall. The culprit has not been found. Hopefully enough funds will be raised to the repair the ‘frame’ to a stunning view of hall and lime avenue carpeted in season by aconites, snowdrops, and daffodils. Opposite, across the busy A607, another stone gateway, dated 1583, came originally from another Fane family estate in Kent. A classic example of recycling a worthwhile garden feature, it defines the ‘Green Walk’ to the kitchen garden.

It is stories such as these that Heritage Lincolnshire hope to unearth and share more widely. The charity has recently launched a new £600,000 three-year Heritage Lottery funded project ‘Layers of Landscape’ to investigate Lincolnshire’s historic landscapes. They started by inviting volunteers to explore the grounds of Revesby Abbey, home of pioneer explorer and botanist Sir Joseph Banks, where fine gates and screen designed by Scottish architect William Burn bear the Banks family initials. (Come 22nd September, another opportunity, Lincolnshire Gardens Trust members will visit courtesy of the Abbey’s new owners.) Here are many layers beside medieval abbey ruins: a deer park and lake, veteran trees and other intriguing remnants of later Victorian gardens. An appropriate place to start this exciting project! Volunteers of all ages will discover more about the local area, meet new people and gain new skills, experience and knowledge. After over twenty years exploring Lincolnshire landscapes, I can vouch that enjoyable site surveys lead down unimagined new paths! Find more information at www.heritagelincolnshire.org/layers

Will volunteers find old statues, particularly potent garden features, linking ancestors with the gods and goddesses of antiquity? Heroes and nymphs of myth and legend, and iconic kings and queens help to ‘people’ a garden. Take your pick. Philosophers and scientists, poets and politicians, saints and brave soldiers. A singular presence, aging over time with lichen and mosses, married romantically into natural bowers, stimulates thinking and further investigation into past celebrities, customs and garden styles.

Last month, invited to Haddonstone Show Garden, I found a wealth of classical garden ornamentation and seats artfully displayed amongst pergolas, stone-edged pools and gnarled and moss-laden apple trees. I do recommend a visit, this inspirational garden, like no other, is just off the M1 north of Northampton in the picturesque village of Haddon. fascinating, busts, obelisks, sundials and terms, formerly carved out of marble or stone, are now fashioned in moulded lead, terracotta or pristine contemporary concrete. I was introduced to the latest Haddonstone eye-catcher marking the 2016 Tercentenary of Capability Brown – his observant eye, said ‘never to have failed him’, surveying the scene with an amused, ever alert expression. Apparently, he has proved a popular line! If of the literary bent, some invest in a head of Shakespeare, whose many famous plays are often staged in garden settings. I recognised the more handsome sun god Apollo in dappled light. The same face on a new sunburst plaque inspired by a Soane Museum relic would ornament any garden wall and bring thoughts of sunlight even in rain! Later I came across decorous Sabrina – goddess of the River Severn.

Driving home from Haddon, I cogitated whether and where a bust of landscape hero, Brown, would grace our old orchard garden. I needed to ask the ‘main man in my life’ if he welcomed the idea. His answer: “Absolutely! An appropriate improvement!” Now I find myself wondering, idly, if in 300 years or so, gardens will be ornamented with a smiling Alan Titchmarsh.