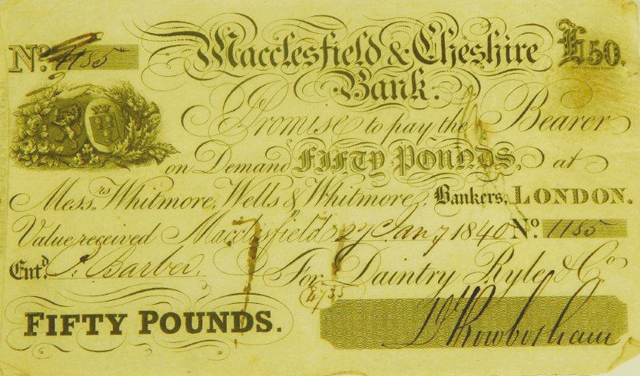 From the humble fiver to the majestic £50 note, we take bank notes for granted these days. The familiar phrase ‘I promise to pay the bearer on demand the sum of…’ is certainly reassuring, having been in use for over 300 years.
Although the use of banknotes goes back to seventh-century China, when merchants used them to avoid carrying heavy copper coins for large transactions, it was only in 1694 when England needed money to bankroll King William III’s war on France that the Bank of England was established.

It encouraged people to exchange deposits of coins for handwritten notes that promised to pay the bearer the sum of the note on demand. As the smallest denomination was £50, only the very wealthy would have seen such notes – as the average annual wage was around £20.

By 1745, fixed denomination notes from £20 to £1,000 were being printed and the first £5 note was introduced in the eighteenth century. In 1853, the first fully printed notes appeared bearing the familiar phrase mentioned above, which remains unchanged to this day.

Before the nineteenth century, country bankers, often groups of merchants, could issue private bank notes on a restricted basis. Later, the 1844 Bank Charter Act ruled that no new issuing banks could be established and existing note issuing banks were stopped from printing new notes.

It was probably a good idea, as when a country bank went bust the bank note it had issued suddenly became completely worthless. These days, however, the historical interest in banknotes means antique notes always have a collectable value at auction.

During the May sale at The Lincoln Auction Rooms of Golding Young & Mawer, four rare banknotes dated 1840 from the Macclesfield and Cheshire Bank went under the hammer. Incredibly the bank went bust in 1841, just a year after the notes were issued, meaning the original unlucky owner stood to lose a large amount of money as the value of his notes was wiped out.

The banknotes had been consigned for auction by a local vendor who had finally decided to test their current worth by offering them to the highest bidder.

On sale day, there was great interest in the lots especially from buyers bidding live over the Internet. The first lot, a £100 Macclesfield and Cheshire Bank note dated 27th January, 1840 – Queen Victoria’s 21st birthday year – sold for £1,100 after intense competition from collectors bidding online. Meanwhile the second, a £50 banknote, made £600; another £20 banknote sold for £200 and two £5 banknotes made £50 each.

Whilst the banknotes may not have recouped their original investment, the result of £2,000 was a good return on banknotes which were once declared worthless.