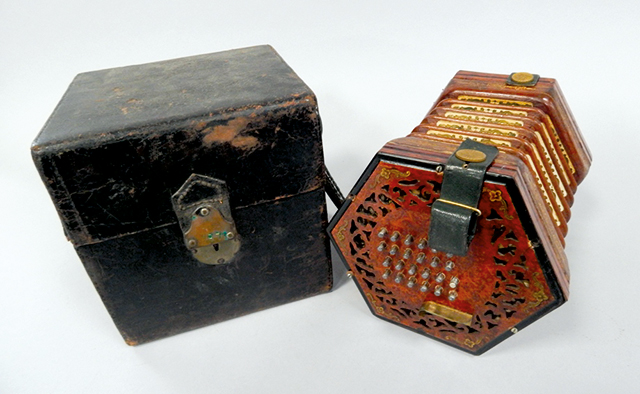 William Gregory MRICS of Golding Young & Mawer brings you news from the sales room.
Musical themed antiques and collectables may not ring everyone’s bell but recent auctions results have hit the right note.

A Nicole Freres continental wind-up musical box tops the charts, selling for £12,000. Produced in Geneva, Switzerland from the early nineteenth century, these musical boxes are considered the very best due to the highly complex movements, producing perfect pitch and sound.

On a similar theme but visually more impressive, an original Josef Raffin street organ attracted much attention, selling for £5,500. Josef Raffin has been producing organs since 1960 from his workshop in Überlingen, Germany and has a worldwide reputation for combining traditional techniques and modern technology.

Violins regularly appear at auction and command a variety of prices. One such sold with its case and two bows, making £1,750, helped by the label inside from Leandro Bisiach Della Schuola, indicating it may have been by the Italian violin maker, who died in 1945.

If £1,750 seems a little expensive, a cello recently made £1,000, which could be described as getting more for less.

The ability to play an instrument can also determine if it is value for money. For some it may be easier to get a tune out of an Edwardian concertina for half the price at £550.

Finally, for the best individual sound and value, a Yamaha brass alto saxophone shone at auction for the jazzy price of £240.