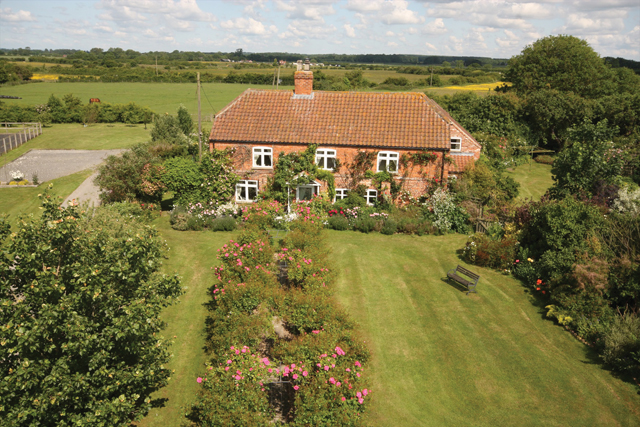 Own a little bit of Lincolnshire

When Janet and Fred Richardson bought Klondyke Farm at Bratoft, near Skegness, it was derelict and uninhabitable. But the boarded up farmhouse with no near neighbours came with twenty-four acres of land, which was a huge draw for Janet.
“I’d always lived surrounded by lots of acres,” Janet said. “I came from a farming background and my grandmother farmed at Partney, so it was in my blood.”

Despite the fact that Janet’s father couldn’t believe they were going to buy it, the couple leapt at the chance to own a little bit of the Lincolnshire countryside and immediately began to make the house a home.

“We immediately felt a draw, as though the house was wrapping itself around us,” said Janet.

“We bought a static caravan, put it in a field, moved in at the beginning of August and set to work on the building. We took all the plaster off the walls, dug all the floors out, sandblasted all the old woodwork and brought it up to date with a damp proof course, re-wiring, new plumbing, heating, new bathrooms and kitchen with a four-oven oil-fired Aga.

“We first used the kitchen on Christmas Day to cook our dinner on the Aga and walked the gauntlet across the mud on planks to eat it in the caravan, because there was no heating or hot water in the house. It was well worth the wait when we did finally move in.”

The couple and their children Sam (now 25) and Jessica (now 24) had previously lived at Firsby in a house with 1.66 acres. When they bought Klondyke Farm, Janet gave up her job as a registered mental health nurse at Louth Hospital to dedicate herself to the renovation work.

She was used to restoring old properties, having previously lived in a cottage reputed to be the oldest in Exeter. “I’ve always been interested in reinstating older properties back to their former glory,” said Janet.

Built in 1747, Klondyke Farm is understood to have been built by the Dutch, who came over to dig out dykes, as it has a bonnet roof typical of the country.

Little is known of the history of the house since then, but the previous owners were George and Ivy Clark, who moved into the property as a young married couple. When Ivy died, George went to live with a friend and the property stood empty for twenty years. By the time the Richardsons bought it, the windows were boarded up; holes dotted the fabric of the building; there were dead birds in the bath and farm machinery and rabbit hutches in the living room.

“It was a shell of a house in the middle of a field with no real access,” said Janet. “Once the major renovation work was complete, we worked on it steadily over the years.”

Now the lovingly restored and beautifully decorated English country farmhouse is a testament to the couple’s dedication and blends traditional period features with all the conveniences necessary for modern living. It features a sitting room, farmhouse kitchen with Aga, garden room, study, utility room and shower room, four bedrooms and a family bathroom. Outside there are a range of outbuildings which could be renovated into holiday accommodation.

Seven years ago, the couple began work to restore the two-acre garden and twenty-two acres of organic grass fields and wildflower meadows back to their former glory. The meadows are bordered by areas designated as Sites of Special Scientific Interest.

Under the Countryside Stewardship Scheme, the couple dedicated twelve acres to wildflower meadows, in which green wing orchids and many other native plants and flowers thrive. There are also natural water areas for birds and insects and kingfishers and barn owls are regular visitors among the abundance of wildlife.

The mature, landscaped gardens have been stocked with 130 species of roses including many old fashioned heavily scented varieties and there is also a scented flower garden and a stocked lake.

“The whole twenty-four acres are organic and produce wonderful organic hay,” said Janet. “We have a pond full of waterlillies which is quite spectacular at this time of year.”

When they first moved there, the land was ideal for Sam and Jessica to keep their ponies and even though the children have now left home, Janet still keeps and rides Irish native Connemara ponies from which she bred two foals this year.

Now, after thirteen years in the property, the Richardsons have decided the time is right to downsize and so have placed Klondyke Farm on the market.

“We’re looking to sell up and downsize and let somebody else give the house and gardens a new lease of life,” said Janet.