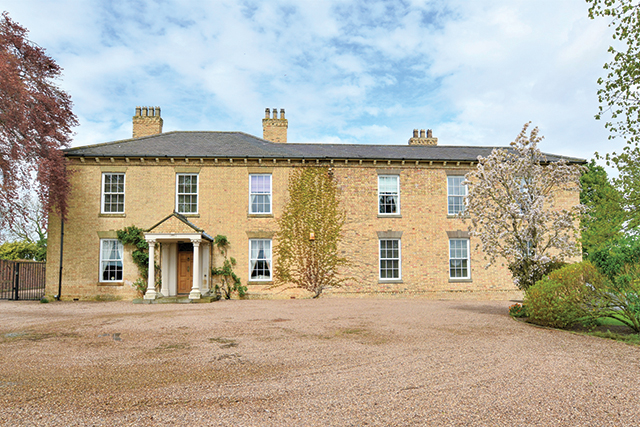 Paradise of wildlife and peace

On the market with:
Starkey and Brown

Set in a picturesque forty acres in the heart of the Lincolnshire countryside, Scotterwood House at Gainsborough is a little piece of paradise.
The Georgian property, which has been extended over the years, stands half a mile from the road in a location which includes ancient woodlands, an abundance of wildlife, formal gardens and equestrian facilities.

The vendor, who does not want to be named, bought the house twenty years ago and describes it as “a phenomenal house”.

He said: “We had sold our house, had nowhere to move into and we wanted a large house. Scotterwood House was the biggest house with its own grounds on the market at the time. We didn’t need a big house as our two sons had left home by then but as it turns out, we have got four grandchildren over the last ten years and it has been an ideal place for them to visit, especially with the swimming pool.”

The house was built in 1825 for William Hutton Junior who was the son of William Hutton Senior, a baron who lived in Gate Burton Hall on the other side of Gainsborough during the 1700s. His son built Scotterwood House as a shooting lodge because of its peaceful location and abundance of wildlife. Later the house was let to a series of tenant farmers who farmed the land around the house.

Interestingly, the house is not listed as architecturally interesting as it is believed locally that when Sir Nikolaus Pevsner visited historic properties in the area for his series of books titled The Buildings of England, published between 1951 and 1974, he overlooked Scotterwood House and visited Scotterthorpe House, which is just a mile-and-a-half away, instead. Subsequently, Scotterthorpe House was listed but Scotterwood House was not.

In more recent history, the property had been owned by two brothers who lived into their nineties. When they died, it fell into a derelict state and was eventually bought by a builder who spent three years renovating it but did not complete the work fully. Another couple took the property on, living there for seven years, before the current owners purchased the house in 1998.

The vendor said: “The previous owners had the house for seven years and decorated it initially but hadn’t done much to it since then. It needed decorating and making liveable again.”

The couple took an initial six months to do the first phase of the renovations in which the house was re-roofed, plastered where needed, and had a new kitchen and bathrooms fitted by local tradesmen. Three years later, they embarked on a major project to almost double the footprint of the house with an extension housing the swimming pool, library and an extra two bedrooms, one with en-suite. The work was completed in 2003 and since then they have maintained the property, installed a fish pond with fountain in the grounds, improved the gardens and added further equestrian facilities.

Approached via a gated avenue lined with ancient woodland and shrubbery, the house features a wealth of period features, including feature fire surrounds and decorated plaster moulded ceilings in the original part of the house. Meanwhile the modern extension offers a hallway glass floor and a glass roofed atrium overlooking the rear gardens.

The ground floor features a large library, sitting room, dining room and substantial kitchen/breakfast diner. There is a conservatory with indoor swimming pool, a large games room located in the cellar and a well, located in the rear entrance of the property, which is viewed by looking down into the cellar. The first floor has six to seven well-proportioned bedrooms, three with en-suites and a family bathroom. The master bedroom has patio doors leading out onto the swimming pool roof, a dressing room and an en-suite bathroom.

Outside in the forty acres of grounds is a detached two-to-three-bed annexe (subject to change of use), a brick built barn holding four to five stables, hay and tack rooms. Beyond this is a 20m x 40m sand manège, securely fenced paddocks and further outbuildings which are ideal for an equestrian enthusiast or could offer a potential business opportunity. The grounds also include twenty acres of ancient woodlands of mostly oak which are home to an array of wildlife including roe deer, rabbits, squirrels, woodpeckers, pheasants and bluebells.

“The house is a paradise of wildlife and peace, absolutely fantastic and the best place I ever lived in,” the vendor said. “We can see 360 degrees over woodland and open fields from the house because it has been built on a rise. The nearest neighbours are half a mile away.”

Although they have loved living at Scotterwood House, the owners have decided to downsize and have placed the property on the market.