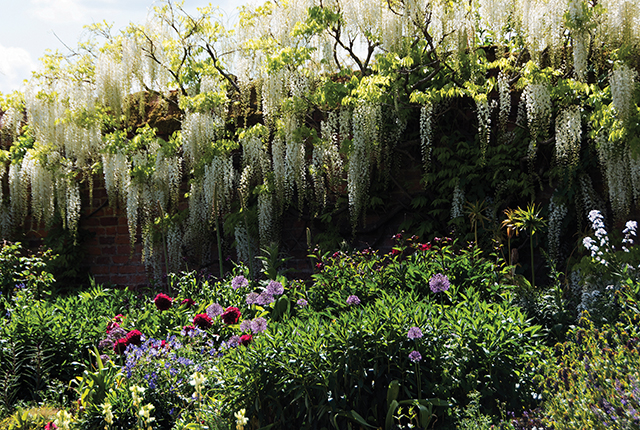 Patience – with a dose of memories

Young and old are exercising patience by the bucketload just now. The ‘stay at home’ request to stop Covid-19 in its tracks will save lives. Spring blossom seems extra special this year and alive with birdsong – as if nature intends to help us through this ‘life on hold’ and difficult social distancing period. Here some uplifting news will stir memories of ‘dappled things’.

Last October, we featured the new G.R.O.W. charity creating hospital gardens in Lincolnshire beginning with one outside Grantham Hospital’s Ward 6, with generous local support, including from The League of Friends of Grantham Hospital. Along with many events planned for May, the official opening by Mr Toby Dennis, Lord-Lieutenant of Lincolnshire is in doubt. However, miraculously timed for this unprecedented pandemic, the benches have arrived, and all newly planted bulbs are flowering, offering calming respite and hope to both patients and superb NHS staff.

Founder Nikki Applewhite has designed a second hospital garden adjacent to Grantham’s Outpatients Department. The intimate space lends itself to a Mediterranean setting where patients can sit while waiting for appointments. Everything will have to be taken into the garden by hand, and work done at weekends to avoid disruption to patients. Planting will be in a gravel mulch to make this garden sustainable, keep weeds down and reduce water loss. Already the reception staff and nurses have raised over £1,000.

Optimistic and unstoppable, Nikki hopes that come August/September, landscapers Ian Batchelor and Sons will start this challenging project for cost: “I never realised how much positive response I would get from this idea. Grantham Hospital has an extraordinary community within it. We have received 100% support from all the staff. Everyone is thrilled to see where their money is spent, and friends and loved ones directly benefiting. I believe this work is essential, especially considering what is happening in the world.”

This time last year, I remember re-visiting the iris collection in Doddington Hall’s ‘Unforgettable’ gardens. My husband Mike sat painting, Hockney-style, on his iPad, while I pottered with my camera in the sheltered walled garden overflowing with crimson peonies, purple alliums and early roses. Glorious, cascading white wisteria took my breath away.

Besides plantsman skills, the late owner Mrs Vicky Jarvis had foresight and drive as founding chairman of Lincolnshire Gardens Trust (LGT). Over the last 25 years, an impressive and surprising array of gardens and conservation projects have been supported, including in schools. We hope to continue her significant legacy, still commenting on planning applications affecting historic parks and gardens, while fundraising garden visits will now be re-scheduled.

In March, before the lockdown, volunteers organised a Saturday working party in Grantham’s Queen Elizabeth II Country Park to mow and scarify the whole area preparing a seed bed for a wildflower meadow opposite the ‘Diamond Grove’ (Queen’s Diamond Jubilee 2012 Project, supported by LGT and Wyndham Park Forum). Created with Pocket Parks funding, a seed mixture from Emorsgate Seeds EM5 and EM8 has now been sown including yellow rattle. This parasitic plant weakens grass growth allowing wildflowers the chance to grow. Once this seedbank is established, volunteers will harvest seed to then develop other areas.

Recently I met Nicky van der Drift, International Bomber Command Centre director. 8,000 daffodil bulbs waving in the breeze will be followed by drifts of wildflowers in amongst the memorial walls of names. Twenty beech trees along the east boundary, donated by LGT and supplied from Aveland Nursery, and ‘Lest We Forget Roses’ are settling in the Peace Gardens. The IBBC staff’s hard work to bed in the memorable Spire landscape, with several rare species of bird now staying on site, has been recognised with an Ethical, Responsible and Sustainable Lincolnshire Tourism Award, and, for the second year running, The International Tourism Award sponsored by Visit Lincoln.

Nicky also related how ground staff have now planted 1,500 bright orange tulips, with crown-shaped petals, ‘Liberation 75’, donated by the Dutch government in memory of those RAF and Commonwealth bomber crews, including Canadians, who took part in ‘Operation Manna’ to feed the people of the Netherlands and so commemorating this month’s 75th anniversary. She also shared this special story, courtesy of Lady Ursula Cholmeley, Easton Walled Gardens:

‘In 2002, right at the beginning of the restoration of Easton Walled Gardens, the phone rang. It was Doug Campion, a neighbour from Colsterworth and a keen amateur tree grower asking if I would like any trees. Of course, I said Yes. Despite being in his nineties, he helped me plant an oak and a walnut. Then, one day, Doug arrived with a small apple tree he had grown from a pip. We planted it together and waited.

‘The first fruits soon came and much to our surprise they were good. Large, firm, yellow-green apples festooned the tree in October and November. It looked like this new variety was a keeper. Each year, the tree continued to grow and produce fine, healthy crops.

‘What should we call it? Doug was proud to have been an RAF engineer and my grandfather had been in 12 Squadron during WW2 and flown Lancasters and Wellingtons from sites across Lincolnshire. After two years of flying missions, his flight navigator recorded in his logbook: ‘Pilots’ 21st birthday.’ He met my grandmother while she was serving in the WAAF and they were married for over 50 years.

‘Meanwhile in Lincoln, Tony Worth was co-ordinating an international drive to commemorate those in Bomber Command who had fallen. At an inaugural fundraising event surrounded by a Lancaster, veterans and young airmen and women, it seemed obvious to me that we should honour those who had risked and given so much. After some discussion, we called it ‘The Squadron Apple.’

‘But we only had one tree. Apple varieties must be cloned to keep them true, which means taking a small piece of wood (the ‘scion’) from the parent tree and grafting it on to a new rootstock. The first year produced rather scrappy results (none of the gardening team at Easton had ever tried to propagate trees like this before). In 2018 we made some good clean unions and began to keep a small stock for RAF commemorations.

‘The newly finished International Bomber Command Centre found out about our offer. On 30th January 2020 we delivered three trees to site manager, Roger Williams. The trees have been planted in the grounds. Eventually they hope to make crumbles for visitors to the restaurant using their own apples.’

Chris Shaw, Belton’s lead ranger said: “Planting this orchard is a great example of community and partnership working. We are looking forward to see it bear fruit, quite literally.”

Rest assured, once the all-clear is sounded, and, just as VE Day 75 years ago, “we will all remember them”, and how we will celebrate! Many enthusiasts will flock to enjoy those inspirational gardens that we have missed visiting, let alone eating cake together! Stay safe everyone. Nature will help us come through – and, like Ringo “we will get by with a little help from our friends.”

For more information and ways to donate visit: www.growcharity.co.uk