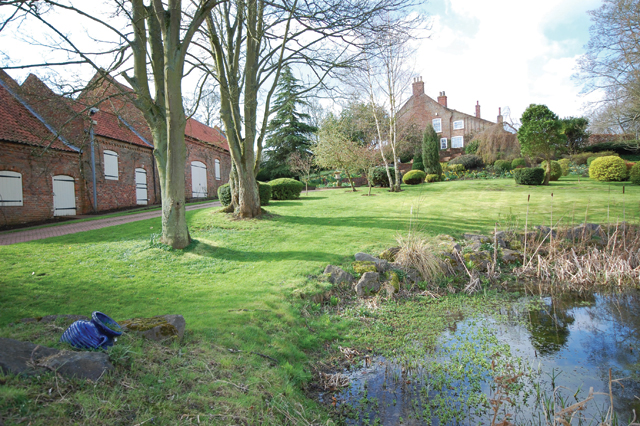 Perfect for a country life

Tucked away in a fold of the Lincolnshire Wolds, the Grade II listed Psalter Farm at Skendleby Psalter was perfectly located for Dawn and Jan Smith.
When the couple bought the property six years ago, Jan had already had his eye on it for some time as it was halfway between two of the sites of his business Welton Aggregates, which has offices at South Thoresby and a quarry and farm at Welton-le-Marsh.
Dawn, who has three children with Jan – Charlotte (20), Jonny (19) and Ben (17), said: “Jan had driven past the house frequently and loved its character and its location which was spot on for him.

“At the time, Skegness businessman, David Fravigar had owned the farm for eighteen months but had never lived there and we heard from his sister-in-law that he was interested in selling it.

“We met David at the house and we fell in love with it instantly. It had so much character, a real homely feel and had been finished to a very high specification by the previous owners.”

When the Smiths bought Psalter Farm, they had been living in a detached cottage at Welton-le-Marsh and had been looking for a new home for some time. Dawn, who competes in British Dressage competitions, was keen to have her horses close to home. She now owns Dutch horse, Voltaire Boy which she trains with Tracey Woodhead from Grimsby.

The family own five horses in total. Charlotte looks set to work with horses, having completed a qualification in equine science and complementary therapy at Reaseheath College in Cheshire and an equine body worker course in Essex. She is now undertaking her externship at home.

She competes in showjumping events nationally and has just taken on the race horse, Balius which came to Darley Thoroughbred Rehoming in Cambridgeshire and was owned by Sheikh Mohammed and trained by Godolphin. (Jockey Frankie Detorri is pictured making his trademark leaping dismount off Balius at Veliefendi Racecourse in Istanbul after winning the Listed Anatolia Trophy on the first day of the 2009 festival.)

Meanwhile, the farm was the perfect place for Dawn and Jan to entertain friends after the Welton Shoot. Jan owns the shoot which meets between twelve and sixteen days a season.

The family also own DBAS Builders Merchants and their son Jonny, who is a keep fit fanatic, is currently training in the Horncastle branch with a view to eventually taking over the running of the company. Ben, who is vice-chairman of Alford Young Farmers, is still living at home and studying farming at Lincoln’s Riseholme College with a view to making a career in farming.

When the Smiths became the new owners of the farm in April 2006, the house had four bedrooms, situated in around three acres of land with a row of Grade II listed barns, one of which had been converted into a single-storey cottage.

Documentation left in the house by the previous owners shows that the farm is first recorded in 1723 and that in 1779 Lady Priscilla Burrell is the owner. By 1790 the farm had fallen into the ownership of Baroness Willoughby and when she died in 1828 it was inherited by Peter Lord Willoughby. Census records then show that occupants were Henry Belton from 1849 to 1889, William H Belton from 1891 to 1904, Robert Raithby from 1904 to 1913, Major WH Rawnsley from 1913 and then Major RR Rawnsley from 1937.

By 1976 Tillen Farms Ltd owned the property and it was then purchased by JL Rowton Ltd. Around thirty years ago it was sold and bought by an American family by the name of Rothering. They refurbished the house to a high standard, adding a Victorian-style orangery. When the Rotherings decided to sell the property and move back to American, Mr Fravigar bought the place.

Dawn and her family immediately felt at home in the farmhouse, which is just five miles from both Spilsby and Alford and around eleven miles from the market town of Louth. She said: “The house felt like home as soon as we moved in and we loved the character, like the beams and meat hooks in the breakfast room. Although it is an old farmhouse, it’s not eerie in anyway.”

As the house had already been refurbished, the Smiths didn’t need to do any work on the property, although Dawn admits to decorating the lounge in more soothing tones than the caustic yellow it had been decorated in! A year after moving in, they also decided to create a fifth bedroom with an en suite bathroom out of a little sewing room near the back staircase of the house and part of the landing.

The property features a wide panelled front door with a stained glass fanlight over it which leads into an entrance hallway with Gothic-style arched windows on either side. The dining room has an open fireplace and views of the front garden, but the most impressive room is the drawing room which is a double height room of grand proportions, with under floor heating and stairs leading to a galleried landing on the first floor. The walls are panelled to half height with timber and light floods in through windows on both floors, meanwhile a marble fireplace is a centrepiece in the grand room.

The living room has an open fire and walk-in cupboards, while the breakfast room has a quarry tiled floor, wooden beams, a Victorian-style range with an open fire and side oven, and doors leading to the rear lobby, the fourth bedroom and the kitchen.
The farmhouse kitchen features wooden beams, quarry tiled floors, a range of modern appliances and has access to the pantry, boot room and downstairs cloakroom.

Upstairs there are five bedrooms – the master bedroom has a range of fitted furniture, a dressing room and en suite, while bedroom four is accessed via its own staircase from the breakfast room, which makes it an ideal self-contained room for teenagers or housekeepers.
The three acres of land outside are all made up of lovely, mature gardens which the Smiths employ a gardener to look after. Dawn said: “The gardens were already established but very overgrown with a lot of old fashioned plants. We employed a local gardener to clear the flower beds and get rid of all the rubbish and Jan and Ben liked to cut the lawns themselves.”

A particular feature of the property are the barns which were granted planning permission to be converted into five holiday cottages two years ago. Dawn said: “Somebody who wanted to run a business from home and liked gardening would have a fabulous time here!”
Although the Smiths love their home, they have now decided to place the property on the market.

Dawn said: “We really do love the house but we’re now looking to move closer to Welton-le-Marsh as all the facilities for our horses are there.”

Until the house is sold, the Smiths will continue to use it as the family home it has always been. Dawn added: “When we do host meals here, it’s great to see the house filled with people. We hope whoever buys the place will love living here as we do.”

• Psalter Farm at Skendleby Psalter is on the market with Masons Chartered Surveyors for £975,000. For more information contact the estate agents on (01507) 350500.