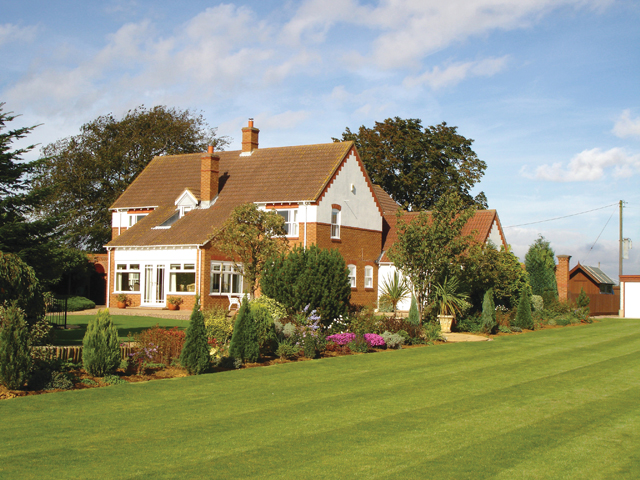 Perfect for parties and pets

When Alan and Denise Howe ‘stumbled across’ Cherry Trees, they immediately fell in love with the place.
Situated in the pretty Lincolnshire village of Leasingham, two miles north of Sleaford, the property had been individually designed by the previous owner and was surrounded by beautiful gardens.

Alan said: “We stumbled across the house and initially requested a viewing because we are both keen gardeners and could see the property had a large and well-maintained garden.

“When we viewed the house, we immediately fell in love with the layout of the interior and the outdoor living areas. The entrance hall sold it to us really – it was very grand without being overbearing and every other room had the wow factor.”

The couple were living in Manchester at the time but had decided to move back to Lincolnshire, where they had both previously lived. Denise, who works at a local jewellers in Sleaford, is originally from Grantham, and wanted to be closer to her mother and wider family; Alan had lived and worked in and around Lincoln thirty years previously and had always wanted to move back to the area. He is the director of a logistics company that sources and supplies kitchen and bathroom products globally for distribution and home delivery to the customers of major high street retailers and DIY chains.

A derelict property had stood on the site of Cherry Trees when the previous owners bought the property in 1988. They then renovated and extended the building in 1992 and moved in shortly after. In 2004, they purchased a further acre of land at the side of the house that is now the paddock.

When the Howes bought the house in 2009, it was in excellent condition, having been built to a high standard using quality materials. It only needed a touch of redecorating to update it.

Alan said: “The house is quite well known in the local area. I was once told that when the house was being built and renovated by the previous owners they were not happy that the walls were not quite square. So they instructed the builders to demolish a whole gable end of the house and start again.

“It is only when you have lived in the house for a few months that you come to the conclusion it’s probably true. We had some Amtico flooring put down in the hall last year. Although it was a big job, the fitter found it really easy and commented that the walls and floor were completely square and true.”

The house truly is a dream, with an extensively fitted bespoke kitchen, spacious dining room, four bedrooms and landscaped gardens which can be accessed from all the main living areas. A unique feature is the reception hallway, which has a vaulted ceiling and galleried first floor landing above, under-floor heating and Amtico flooring.

The lounge is a delightful formal reception room, with a period-style fireplace; the dining room has French doors leading onto one of the patio areas, as well as a sash window overlooking the garden.
Alan and Denise’s favourite room is the sun lounge, which has triple aspect windows with window seating and French doors opening onto another patio area. Alan said: “It is our favourite place for relaxing and looking out onto the garden.”

The breakfast kitchen is fitted with a range of bespoke handmade units, cupboards and drawers in limed oak by Shortland Crafts of Langar. It has every modern convenience including twin sinks, integrated dishwasher, Miele double oven, eye-level microwave with wine rack above, plus a view of the garden from the French doors. A utility room leads from the kitchen, as does an office or playroom.

Alan added: “Our kitchen is also very important to us, as we both enjoy cooking. It also has great views of the garden and open countryside and is extremely private.”

Upstairs, the master bedroom has double aspect sash windows with lovely views and an en suite, and there are three further bedrooms, two of which have en suite bathrooms. There is also a further shower room.

The landscaped gardens are a particularly attractive feature of the property, with an extensive stone patio and a large ornamental pond, enclosed by wrought iron railings.

There is a large lawned area with established trees and shrubs, well stocked flower beds and a separate pond with a water feature. A herringbone driveway leads up to the house and there is hard standing for several cars and a double garage. The paddock is approximately 1.02 acres and can be accessed from the garden or by separate access from Roxholm Road.

Alan, who is a member of the Woodhall Spa Golf Club, said: “The previous owners spent a fortune on landscaping the gardens and they were well established, if a little overgrown, when we moved in. The design is just about perfect and well planned; there is always colour, even in the winter, and it also attracts lots of birds throughout the year.

“We refer to the garden as a park, although it is surprisingly low maintenance given its size. We have thinned out quite a few trees and bushes. It helps if you are keen gardeners, which both Denise and I are.”

He added: “There is a fantastic fish pond and we find sitting by the pond on a summer’s evening, with a nice glass of red wine, very therapeutic.”

Alan and Denise have spent many happy years in the property since they bought it. Alan said: “This is definitely an entertaining house. We have held lots of family events here and our friends from Manchester come to stay for weekends and treat it like a mini break! Summers are great because the gardens are south facing, so barbecues go on well into the evening.”

He added: “We also have ‘dog stopovers’ because Denise’s brothers and sister have dogs and the paddock is a safe place for them to romp around. All the grounds are rabbit proofed and also, by definition ‘dog proofed’.”

The house is a second home to Alan’s two sons, Alex (20) and Edward (16), who live with their mother in Manchester and visit every half-term.

Alan said: “Whilst born and bred in Manchester, they both embrace the country lifestyle and, although young, marvel at the open space and tranquillity around us.”

So why have the Howe’s decided to move from their lovely home now? Alan said: “Unfortunately my work is the reason for moving. We are extremely busy and I really need to be closer to our head office for the foreseeable future.

“Our only regret is that we didn’t have the opportunity to buy the house years ago, because it’s a great place for kids to grow up. Even the pond is safe for small children, as there’s a steel fence around it with lockable gates. The previous owners thought of everything and spared no expense!”

He added: “We both hope the people that buy the house continue the legacy of high quality which it deserves and that they like outdoor living, because the gardens and patio areas are a particularly nice feature of the place.”