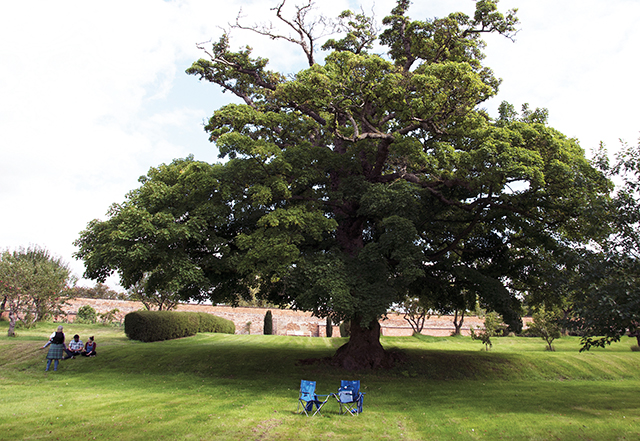 Picnic in the park

Steffie Shields visits Knaith Hall, the home of John and Rosemary Burke, for a picnic in aid of St John Ambulance.

Travel to Knaith Hall can be slightly precarious, even now with satellite navigation. You might easily end up on the wrong side of the River Trent, where Knaith Hall Lane leads directly and disconcertingly to a dead-end at the river’s edge! You must turn around, and then drive a circuitous route for another 12 miles, crossing the river at Gainsborough’s old bridge. I suspect, from the Romans to the Vikings and Cistercian nuns, the best way for visitors to arrive was by boat. For many centuries, ferrymen earned their keep at this pronounced, rounded, knee-shaped bend in the river.

Thankfully, my husband and I were approaching from the south. Indeed, on many visits to Gainsborough, I had noticed the long, rustic brick wall that surely piques the curiosity of many a passerby. Expecting to find a walled kitchen garden, or at least remnants, I was surprised. Instead, the land on the other side falls away towards the river. Parallel to the wall, man-made grass banks extend on three distinct levels. Are these intriguing remains of formal terrace gardens and walks, typical of the 17th century, created to take in the view west to the busy river? These have now been mostly appropriated to host an orchard, with serried ranks of gnarled espalier fruit trees perhaps from the Victorian era.

We were greeted by Lincolnshire’s St John Ambulance volunteers. Their only money-raising event this year, due to the Covid pandemic, was in aid of both the premier first aid charity and the St John Jerusalem Eye Hospital, equally badly in need of funds. From the start, especially during lockdown, St John Ambulance has been a huge support to the NHS. Their highly trained volunteers have given over 100,000 hours of support to patients and the community. This seemed a great, safe way to celebrate easing of restrictions whilst complying with social distancing guidelines, with plenty of open space and secluded spots to spread out a picnic down by the river or all around the extensive gardens.

The weather was balmy. Everyone was able to relax and enjoy both afternoon tea and ice-creams!

Our hospitable hosts Rosemary and John Burke were on hand, happy to welcome everyone and to answer questions about the fascinating history of their unusually long and quirky Grade II-listed house. John’s grandmother used to live here, so it has always played a part in his world. Since moving in 20 years ago, they have planted many trees including limes on the drive and ornamental crab apples by the tennis court. A narrow parterre of clipped box circles and potted hydrangeas features by the front door.

Here is a sense of history in shedloads. The early siting of the house made the most of the river location and acres of lush pasture stretching south. Apparently, remains of an 18th-century deer park can still be made out: parts of the park pale, huge banks lying north to south either side. The old church of St Mary nestles into the hillside on the edge of a wood nearby. Many of the house’s owners have proffered a protective arm for its heritage.

Originally a nunnery chapel, part of a 12th-century Cistercian foundation, Heynings Priory, St Mary’s has been a holy place over hundreds of years, with many knees bent in prayer. It became the parish church of the medieval village of Knaith, before sadly falling into ruin, having been abandoned after the Dissolution of the Monasteries. Much altered through various restorations, some early herringbone stonework survives. Inside, a beautifully carved stone font, among the oldest in the county, dates from the 14th century.

Knaith Hall has also lived through various modifications. Some elements of the present brick house date back to the original mid-16th century build including chimneys on the east side. Once deteriorating Victorian ‘improvement’ cluttering the facades, mock-Tudor, half-timber cladding, has now been removed, recapturing some romance of the house’s picturesque heyday. Richard Dalton, a Yorkshire-born descendant of the Darcy family who had originally owned the estate in the 14th century, had entirely re-modelled the southern section to resemble a ‘cottage ornée’ or ornamental cottage.

Rosemary showed me a charming painting in pen and watercolour wash from this Georgian period, not long after the windows had been re-fenestrated with great diamond panes, seldom seen today. They lend singular character. The original Farmer & Son Gainsborough foundry mark is still seen on novel cast iron pillars supporting the master bedroom. She told me: “When the wind blows it feels a bit like the prow of a ship!”

In July 1791, Viscount Torrington recorded his visit to Knaith, one of many explorations in Lincolnshire, painting a picture with words in his famous diary:
‘The house is in great rurality of taste, with windows to the floors, which are all stucco’d; a small conservatory, forming one side of a study, is entered from the dining room; everything savors of oddity and meant particularity.

‘In the front of the house stands the little old church; below which the River Trent flows in a beautiful curve, affording a constant scenery of traffic. Take it as a place of soil, and of oddity, it is much to be admir’d; tho’ I should fear it must be cold in winter, being too much upon the greenhouse cut; however, I think I could live very happily in it. It makes a pleasing variety with our other vivenda (residences); especially those of this day; and must be a capital spot for fishing.’

The well-stocked conservatory has long since been demolished. However, both Dalton and his son Henry Dalton, notably High Sheriff of Lincolnshire in 1802, were likely responsible for the natural landscape planting still existing in the pleasure garden. Typical favourites of the picturesque period continue to frame the views: a majestic copper beech, a stately Austrian pine, and a couple of venerable spreading sycamores, Acer pseudoplatanus, acting as eyecatchers in chosen spots, together with holm oak and a ginkgo biloba rarely seen in the county.

What was also unexpected, strains of music sounding out across the park provided by the Grimsby and District Pipe Band. These smart, proud pipers of North East Lincolnshire paraded with their bass drummer, to entertain all the picnickers, young and old, including many families with children. Ballads such as ‘Scotland the Brave’ and ‘Amazing Grace’ added great atmosphere to the occasion.

Time seemed to stand still. The event was well organised, with helpful St John Ambulance officers on hand. Children behaved impeccably, and often stood back patiently to let slower older folks pass by. A perfect, health-giving way to spend a Sunday afternoon; this shows, even if we have to socially isolate next year, that it is possible, with careful planning and thoughtful volunteers, to hold such traditional, generous and memorable open-air community events in large gardens or parks.

A picnic in the delightful surroundings of a fascinating historic house and park made a welcome change. Everyone left with a smile on their face. Like Torrington, we had all experienced uplift. As the celebrated 20th-century landscape architect Sylvia Crowe once declared: ‘Visual access is also part of recreation’.

Snowdrop Walk: Sunday 14th February 2021 11am to 3pm. Knaith Hall DN21 5PE on the A156 Lincoln/Gainsborough road, three miles south of Gainsborough. Entrance £2.50. Walk in park-like garden to see snowdrops and aconites, and by the church wood and the River Trent, by kind permission of Mr & Mrs J Burke. Longer (45 min) walk through woods up to unique 18c. Gate Burton miniature ‘Chateau’. All proceeds in aid of St Mary’s Church (which will be open.) Dogs on leads welcome. Stout footwear recommended.