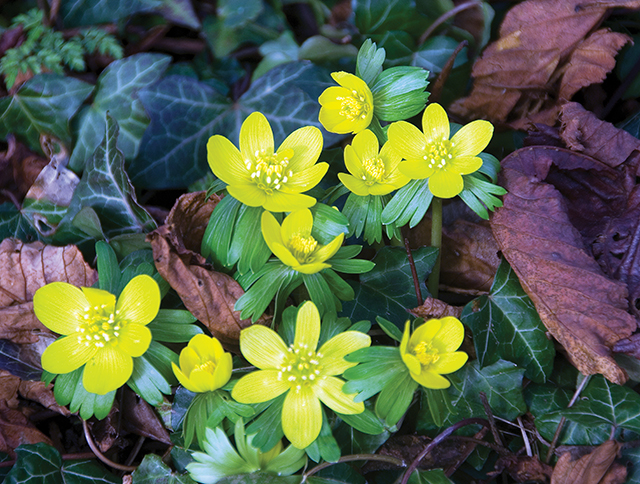 Steffie Shields celebrates this month’s uplifting hues and plans to chase away the blues.

How poor the light has been of late, all those short December days mostly shrouded in low cloud gloom. Evidently 2021 has been the mildest, dullest winter with the fewest hours of sunshine since 1956! Despite much-needed quality time spent with close family and friends over Christmas and New Year, the wretched Covid pandemic still hangs over us all, impacting on daily lives and livelihoods in so many difficult, unfortunate, and often distressing ways.

If not actually praying for spring on bended knee, we have all been primed this year to welcome the new season’s arrival. Reward your patience with a quick circuit of your garden or a nearby park. Somehow, the heart skips a beat on spying the first snowdrop shoots poking through damp earth. Sparsity of blue skies and unprecedented lack of light will soon be forgotten as random communities of buttercup-yellow winter aconites suddenly appear. When so many leafless trees are relatively rigid, stark sticks in the surrounding landscape, the sight of soft roundels of fresh ‘skirts’ cannot fail to engage. Meanwhile, Cyclamen coum will raise their dainty pink flowerheads in the shade of hybrid hellebores nodding in approval.

Reading professional gardeners’ articles often proves therapeutic and thought-provoking. ‘Gardening Ways’ is a blog posted regularly by an observant old friend, Gary Webb, whose words and images exemplify his great eye for detail. His positive statement in mid-December resonated: “I chose to take a cost-effective approach due to a tight year, but I’m sure all will be wonderful from the moment the first iris flowers spring forth.”

This cheered me up with faith and hope, which are both reflected in the meaningful blue iris. Thank goodness, I planned ahead last October, simply by planting up several pots, reasonably deep, as per normal, with inexpensive early-flowering dwarf iris. Lately, as the years pass by more swiftly, the more I need colour in my life.

This month will see obliging, self-seeding clumps of rich lavender purple early-flowering, long-necked Crocus tommasinianus. I love how they open their petals fully to face the sun and let their pollen-rich orange stamens attract pollinating bumblebees. Surprising displays of miniature iris amongst drifts of milk white snowdrops, or early mini-daffodils, probably offer me more delight than any other February flower.

A considered circle of dwarf iris provides a striking, more unusual ‘pop of colour’, encouraging me to pause, study its sophisticated form and appreciate the delicate fragrance.

Make sure such varied fairy rings are in view of both bedroom and family room windows. Best to position pots of low-growing iris on tables or plant stands to be able to catch their delicious scent wafting on the breeze, or even bring them briefly inside for an hour or two to enjoy. After flowering, when their spiky leaves lengthen as each flower fades, treat the bulbs to a potash feed before they die back to strengthen them for next year’s display. They naturalise well if undisturbed, planted in drifts in the fronts of borders, in a scree or gravel garden or rockery, or in partial shade under shrubs.

Last February, I placed a terracotta pot of ‘Alida’ on the ironwork patio table inherited from my mother-in-law, in front of our summerhouse where she loved to sit in the sunshine and listen to the birdsong. Each individual flower was soft silky blue with a yellow throat, and as pleasingly graceful as an exotic orchid.

The name stems from Latin, and means ‘small winged one’. In Greek myths, Iris was the beautiful young goddess of the rainbow, a curvaceous link between sky and sea, heaven and earth. She was also the messenger between Olympian gods and mankind. A pot of fluttering ‘Alida’ iris flowers, though only 15cm at most in height, is well worth the wait; a mood-lifting sensation bringing a touch of firmament and sunlight into the barren winter garden.

If I had to rank the several, fully hardy cultivars of Iris reticulata I have grown over the years, Iris ‘Gordon’ would still head the list. The richness of the silky, true blue curve and curl of each bloom, combined with a complimentary ridge of vibrant orange, plus the dots and streaks on each, white with deeper velvet blue tip, suggest the painterly work of a porcelain artist. Iris ‘Harmony’ would come a close second, for its archetypal life-enhancing royal blue with yellow slash on each fall. The crests of the flowers have a most attractive, ruffled and feathered edge. Many gardeners rate the unusually patterned dwarf ‘Katharine Hodgkin’ for its cooler ice-blue, with darker veins, somehow strangely smudged with yellow, and random spots. This variety can look dull in comparison with the mysterious and polished ‘Purple Gem’, well named for its royal simplicity.

This neatly brings me to Her Majesty, The Queen, who has now steadfastly served her United Kingdom citizens and the Commonwealth for an incredible 70 years! I trust this marvellous milestone in the history of the entire planet will stimulate us all to bring out the flags, and plant up all our gardens with an overabundance of floral gaiety. Besides participating in the Platinum Jubilee planting of Queen’s Canopy trees in her honour, let’s plan amazing displays in villages and town centres this coming June, to help make the most spectacular red, white and blue summer festival ever witnessed! Imagine all those church bells chiming, beacons blazing and street parties with millions of cupcakes and cheers.

Purple has been the most prized colour of royalty since ancient times; pops of purple flowers would be wholly appropriate this year in amongst patio pots and wildflower corners. In Victorian times, iris represented courage and admiration. People gave purple iris blossoms representing compliments and wisdom to those they held in high regard, so majestic, regal irises would deliver a natural ‘message’ of approval.

Then again, plantings of the gorgeous sun-loving African daisy, Osteospermum ‘Deep Purple’, with beautiful blue eyes, would add a touching tribute to Her Majesty, who seven decades ago this month, when visiting Africa with HRH Prince Philip, first learned she had become Queen. There’s still time to order a new, bare-root red rose or two, together with blue and white perennials such as daisies and delphiniums. Quick, buy those cheerful packets of annual seeds before they sell out – and get sowing to participate in a living, nationwide message of gratitude!