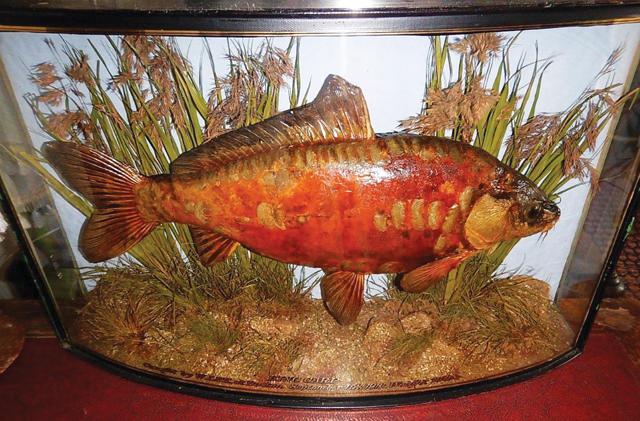 Taxidermy, the art of preparing, stuffing and mounting the skins of animals, birds, fish and reptiles for display, preservation and study, is a very dramatic art form.
Specialist collectors look for age and quality, so when a rare collection of eight taxidermy fish appeared at the recent County House Auction at Queniborough, Leicestershire, held by Golding Young & Mawer, it was not surprising that they sold for over £16,000.

As well as being of excellent quality, the fish had local interest as some of them were caught in and around Boston in Lincolnshire.

Two of the highest achieving items in the collection were preserved by the finest exponent of taxidermied fish in Europe, J Cooper & Son of 28 Radnor Street, St Lukes, London. Founded in 1830 by John Cooper, the company pioneered the use of materials and techniques that are still used to this day. Interestingly, the techniques used to preserve fish cause their colour to fade, so it has to be skilfully painted back onto the surface of the skin.

The company traded for 120 years from premises in Radnor Street, London and then after the war from Bath Road, Houndslow. Typically British coarse fish and game fish, such as pike, trout, bream, tench, roach, rudd and perch, were mounted, often as trophies. Sometimes rarer fish such as Arctic char, bleak and salmon were also preserved.

Cooper preserved fish on an industrial scale and many still come up for sale over 100 years later. The most sought after are displayed in the original bowed cases which used 2mm float glass to show the fish off to its best.

The highest price achieved in the auction was £3,400 for a specimen of a tench preserved by J Cooper & Sons, 28 Radnor Street, St Lukes, London EC, which was presented in a bow fronted case and inscribed ‘Tench 3lb 7oz caught by J Christie at Boston, July 30th 1922’.

Another of Cooper’s works, a specimen of a chub, preserved whilst the company traded from Radnor Street and mounted in a naturalistic setting in a black glazed and bow fronted case, sold for £1,000. The case was inscribed ‘Caught in Forty Foot, Boston by F Julian, February 24th, 1922, weighing 2lb 10 1\4oz’.

Meanwhile, a taxidermy specimen case of a brace of ferox trout sold for £2,600. The case was inscribed ‘Ferox and Farjo caught on Loch Lough Mask, County Galway, by Mr SS Mossop, May 12th 1909, weight of each 1 1\2lbs’.

A specimen case of two perch, preserved by FW Homer, 105 Woodgate Road, Forest Gate, London E, sold for £2,400. Mounted in a naturalistic setting in a black glazed and bow fronted case, the fish were caught at Eastville near Boston by J Matson in 1912, a fact which was inscribed on the case. One weighed 2lb 1\2oz and the other weighed 2lb 7 1\2oz.