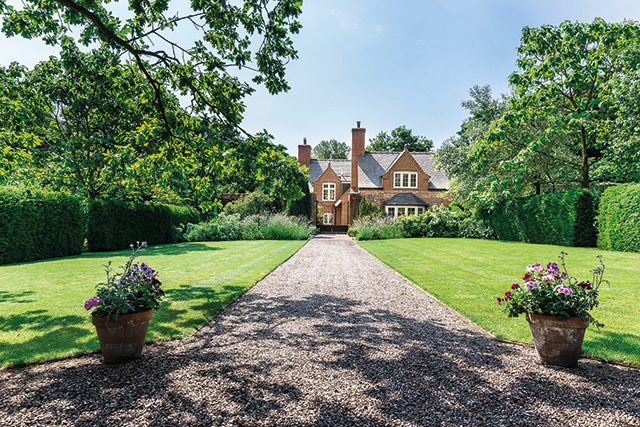 Caroline Bingham visited David and Jenny Eckford. For many years The Walled Garden at Panton was a must-see on the list of National Garden Scheme openings in the county. They are now seeking new owners for the Arts and Crafts inspired home they built and the garden they have lovingly restored.
While a sizeable number of the county’s historic grand houses did not survive the twentieth century their working buildings and walled gardens have been more enduring. Panton Hall, owned during the seventeenth and eighteenth centuries by the Turnor family, was an example of a once glorious home which fell into disrepair in the first half of the last century and was eventually demolished in 1964.

The estate had been auctioned many years before but what remained was the Grade II listed stable block and a 1.75 acre Georgian walled kitchen garden plus frameyard.

“We bought Panton walled garden sixteen years ago,” explained Jenny. “David and I are both from Boston and after David’s retirement from his veterinary practice at Kirton, our first project was the restoration of a walled garden and property, Woodfall Cottage in Dumfries and Galloway.

“Walled gardens, I suppose, are what you would call ‘our thing’. They have a very special climate and atmosphere which make them captivating places in which to work and cultivate plants. When we felt we had accomplished as much as we could with Woodfall Cottage we began the search for another, larger walled garden to restore. It was just fortunate timing that Panton was on the market. First impressions were what a wonderful location this is, on the edge of The Wolds and open countryside. I knew this was a special place even though the 10ft high, beautiful, Georgian red brick walls were covered in thick ivy. There was an agricultural tie to the property and it had been used for breeding rabbits so empty cages littered the ground and the small 30ft x 20ft bungalow alongside was not particularly appealing.”

David and Jenny made their purchase in 2001 and downsized to live in the bungalow while they negotiated the removal of the tie and cleared the ground.

In all, The Walled Garden sits in approx. 6.5 acres surrounded by mature woodland. While we talked in the large kitchen living and dining space, we could see in the grounds from the window, pheasants and Muntjak deer who visit daily along with hares and large numbers of wild bird species.

The new, three bedroom home David and Jenny commissioned was designed by Lee Holmes of Binbrook. Careful consultation with planners enabled the new property to be incorporated into the south wall offering wonderful aspects of the garden from many rooms of the house. Building work began in summer 2007 and was completed the following year. The brick of the house is laid in Flemish bond and lime mortared to blend sympathetically with the Georgian brick of the walls.

“We decided to invest in three large double bedrooms and ensure that the house was warm, light and comfortable as well as spacious,” said David. “The house is very well insulated with a heat recovery and ventilation system throughout. On the ground floor there is under floor heating driven by an LPG gas boiler. Access is via the entrance hall leading to a large living kitchen diner with polished oak floor and log burner. On this floor is also a sitting room with French doors and multi fuel stove plus utility and cloakroom. A Garden Room with triple arched windows leads through to a ‘Hartley Botanic’ greenhouse with temperature controlled openers and sprinkler system nurturing two varieties of grape vine which flourish there.

Upstairs, the master suite comprises a bedroom, dressing room, en-suite bathroom and roof terrace overlooking all aspects of the garden. There is also a family bathroom on the first floor. The entire property is finished to an exceptional standard.

While Jenny prepared lunch, David showed me the useful outbuildings and pantile Bothy which house his potting shed, workshop and an inner sanctum warmed by a log burner where David retreats to read or listen to music. The rooms are furnished with comfortable castoffs and memorabilia.

After refreshments, David and Jenny took me on a tour of the Walled Garden. David explained that in the heyday of the Hall, when the kitchen garden would have supplied most of the fruit and vegetables for the house and estate, there would probably have been several gardeners employed. David and Jenny have completed the restoration work and maintain the garden on their own. It truly has been a labour of love and fulfilled their passion for plants.

“The magic of walled gardens is their ability to deliver four different climates within the shelter of the walls,” said David. “This garden already had a mature shelter belt of trees and it gently slopes down to the south to make full use of the sun. We have found plants to thrive in all positions the garden presents.”

The walled garden has been described as ‘a true gardener’s dream’ because of the variety and rarity of the species here. The pathways were re-established as to the original layout cutting the garden into quarters with a perimeter walkway and central, cross shaped path. We entered the garden through a beautiful wrought iron double gate which the Eckfords commissioned. On the wall alongside yellow tree peonies and a Rosa banksiae lutea were in full bloom. This entrance sits directly opposite the much smaller doorway at the top of the garden through which the estate workers would have gained access centuries ago. Between the two is a wide, elegant lawned avenue lined by hedging and deep borders. Here is also a small brick pumphouse which brings the water from a natural spring to feed the system of pipes, taps and butts around the garden.

On one quarter of the southern edge, the spoil from clearing the paths was used to make a raised croquet lawn. The opposite quarter is home to the vegetable and fruit garden, which Jenny assured me gives her plenty of produce with which to exchange and barter with neighbours for the bounty from their gardens. Here there are cold frames and a large undercover store.

The perimeter pathways along the east and west sides have a low box hedge in front of the wide borders but David explained that along the south face of the north wall, this was removed to give the plants their full growth potential. Weigela middendorffiana , Viburnum opulus, the unusual fragrant Smilacina racemosa, elegant tree peonies and early roses are beginning to fill the borders with colour.

An area in the centre of the garden is planted as an orchard, richly stocked with apple, crab apple, greengage and plum to name a few. The heat and shelter of the brick backdrop allows nectarines, pears and early eating apples such as Beauty of Bath to fruit, with branches espaliered against the walls.

“I am still delighted by the history these walls contain,” said David. “You can see clearly in the lime mortar where nails were driven to hold the supports for the trees. Sometimes I still find pieces of the old clothing on the walls which were ripped into strips to make the ties to support climbing plants.”

The garden has been designed to have particularly dramatic autumn colour. Liquidamber and Cercidiphyllum japonica take centre stage. David was also keen to point out the garden contains a whole lexicon of plant varieties including the last in the seed catalogue Xanthoceras sorbifolium (trained against the south-facing wall).

The garden and grounds of The Walled Garden have a wonderful sense of privacy and magic which can be fully appreciated from the roof terrace. Accessed either by a stairway from the garden or the master suite, where Jenny and David told me they often sit here in the evening, with a glass of something in hand to appreciate the elevated view of the garden.

“We will certainly miss this wonderful property. We have lovely neighbours and we have had such fun on open garden days, manning the plant and tea stalls,” said Jenny. “I think the greatest number we had on one day was over 400 people.
The location is sheltered and looks out on to this area of Outstanding Natural Beauty and yet so accessible for the amenities and transport links of Lincoln.

“It is time for us to move on though. We would like to do that while we still have the energy to find another, but very much smaller garden to work on. We would like to think the new owners will be as passionate as ourselves about gardening, but who will continue the restoration in their own style too.”