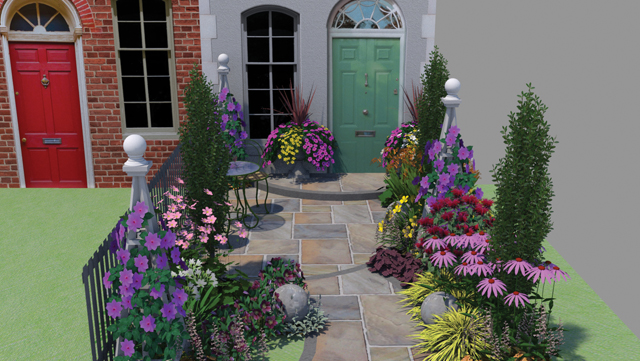 Quirky by name, quirky and caring by nature

Steffie Shields meets garden designer John Cavill preparing a Harrogate Autumn Show Garden.
The opportunity to visit a garden designer’s own backyard is rare. I set off to Bottesford, North Lincolnshire, in keen anticipation. At first glance, much as you would expect, his small back garden, like the front, is neat with carefully selected, colourful plants grouped in harmony. Where‘s the quirky, I wondered? John proudly indicated a bright red and chrome, rounded retro Memphis BBQ by the back door. Nearby a floral china teacup and saucer, mysteriously drilled and bolted together, and spilling out an array of seeds embedded in lard, was suspended on a vivid orange ribbon – not your usual bird feeder. Another on the fence, also from Pretty Vintage House, has a spoon stuck in for the sparrows to perch on, as they peck at a similar feast.

We stepped from the stylish patio onto the uncluttered lawn with a feeling of space. It was only then I realised the grass was artificial! My eye had been completely fooled. John and his lovely wife Heidi have two teenage sons, Charlie and Toby. This quality ‘pretend’ turf makes perfect sense together with the football net and timber climbing-frame at the end of the garden. Wear and tear from daily football action is there none. A horizontal slatted fence, like a see-through room-divider, adds airy interest so all is not seen at one glance. On one side of the garden, a series of sheds house necessary tools, materials and business equipment. Opposite, a few striking flowering plants along the fence create a colourful focus. Each plant has to earn its keep. I suspect these change often, acquired for height and texture at each flower show John attends. At present, hollyhocks and fennel are offset by striped tiger grass – quirky!

Barton-born John never intended garden design as his chosen career. He started in the Beverley timber trade, and travelled the far-flung forestry world including Scandinavia and Siberia. He found himself a useful hobby advising and designing friends’ gardens back home for free, as well as in Russia and Sweden. With one grandfather having chaired both the local Chrysanthemum Society and Allotment Society, a father who grew prize dahlias, and a mother with a degree in horticulture, gardening is obviously in his genes. One day, while working on one chum’s garden, a South African passer-by stopped to chat. Admiring all John’s handiwork, he offered him a landscaping job on the spot which would entail moving south to Kent. John decided to risk swapping a good job with good prospects in a trade with equitable and knowledgeable tree people, to be thrown in at the deep end of a completely different world. He never looked back.

John learns fast and is an adaptable fellow. After four ground-breaking years, his new boss returned to South Africa. John quickly found employment with commercial nurseries where the attitude to plants was ‘dig ’em in’, row upon row, in their thousands. “These firms do not care about plants,” he said. “In 2005 I decided to return home and set up my own design practice, initially working from my father’s house.” He invested in a little green van emblazoned in yellow with ‘Simply Gardening’. Another step, four years ago, was to form a limited company, John Cavill Design. His new van suits his thriving business, an eye-catching ‘Del Boy’ yellow, not a dodgy three-wheeler, and with a smart green leaf and raindrop logo. ‘My world has been daft ever since’!

I found his world inspirational, far from daft. His interest in designs for the disabled led to a job designing a Zen garden for children with complex needs at St Hugh’s School in Scunthorpe. John’s easy-going, open and relaxed approach with the children led to the headmaster asking him to teach them one day a week in the garden. Sharp tools pose no threat. He is now teaching Year 14 and post-school 16 year-olds B Tech three days a week and is Chairman of FOSH: Friends of St Hugh’s.

“Engaging parents in their children’s school is both a delight and a privilege,” John told me, eyes shining. Another school at Willoughby has also asked him to teach in the new garden he has just built.

What about John’s creative garden design business? Not a problem apparently. Somehow he finds enough time outside teaching hours. He enjoys the challenges and camaraderie he finds at flower/gardening shows. To date, he has won six medals – one bronze, three silvers, two silver-gilt – and one BBC Gardeners’ World Award. Recently, at the Harrogate Spring Show 2015, he was thrilled to be presented with the Newby Cup for planting excellence.

Quirky is fashionable! London’s Garden Museum is currently exhibiting ‘Gnome and Away: Secrets of the Collection’: unusual tools, paintings and gardening ephemera from previous centuries, from Humphry Repton’s Red Book to Alan Titchmarsh’s sweater. Imagination and understanding of three-dimensional space are paramount to successful garden design, but there is no longer a need for watercolour prowess. Modern methods have radically changed. John has taught himself digital design processes, and invented modifications, as seen in his ‘Quirky Cottage Garden’ plans for a front garden in a new feature, Inspirational Street, at the Harrogate Autumn Show, the UK’s biggest and most prestigious independent gardening event. He showed me the ‘cottagey’ collection of materials he has been assembling. These include old clay pots and attractive wire baskets filled with alpines, hanging tea-lights and stone globes that glow in the dark (see www.stoneglobes.co.uk).

His regular contractor Dean Brown, of Decol Construction Ltd, will complete hard-landscaping in two days including sponsors Natural Paving. Johnsons of Whixley, near York will supply plants which will need three days to relax and settle in. John advocates Strulch, a make of organic straw mulch he first spotted around delphiniums in the Alnwick Garden, and apparently favoured by gardeners at Buckingham Palace. He will bring in the final extra touches including English oak and cedar ‘Wooden Garden Obelisks’ on the Thursday before judging on Friday. Here is a perfectionist who once famously fetched his mower from home to mow a show garden freshly laid with Rolawn! His artistry will come in placing all the plants, together with the ornamental accessories that he has long been visualising in his mind’s eye, into an inviting, cohesive whole.

I noticed George Bernard Shaw’s words on his computer screensaver: ‘Life isn’t about finding yourself, life is about creating yourself.’ This fits John Cavill to a T – a man who makes the most of his design talents to improve others’ lives. Taking my leave, I asked “What next?” The bold reply came without hesitation: “The future is more quirky!”

Later, I looked up meanings for the novel theme: odd, eccentric, idiosyncratic, curious, peculiar, unpredictable, rum, whimsical, offbeat, fanciful… and also the following: ‘unusual in an attractive and interesting way’. If you fancy taking your children on a trip to the Harrogate Autumn Show, 18th–20th September, do visit John. I guarantee you will find his garden bright, colourful, just a bit different and sure to make you smile. Check out the little chap watering his artificial lawn! Good luck John – you deserve a quirky gold medal.