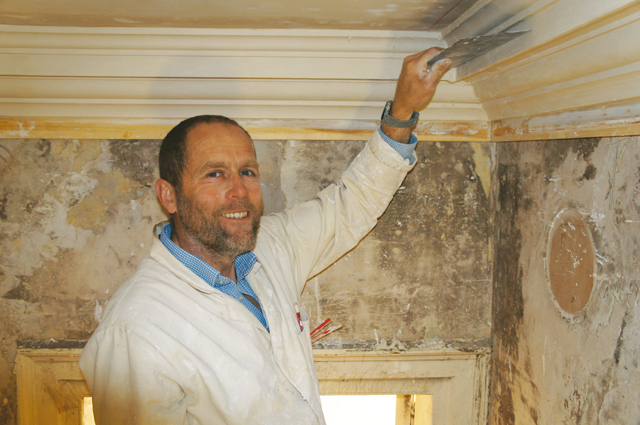 Philip Gaches is an award-winning master plasterer who was born and lives at Deeping St James. Here is his story of the work he recently completed at Claxby Hall.
Claxby Hall is a lovely house set between Alford and Spilsby not far from Gunby Hall and sits on top of the chalk escarpment, from where on a clear day one can see the east coast from Mablethorpe to Skegness.

Gentrified by Samuel Dashwood in the middle of the eighteenth century, the house contains some very fine plasterwork from that time. There are rumours that it was carried out by Italians, perhaps Bernasconi, whose team carried out the later work at Revesby Abbey.

Early one Sunday morning in November 2011 the building caught fire, which destroyed the roof and the combination of fire followed by thousands of gallons of water destroyed the first floor ceilings. These were lath and plaster with five of the rooms having a medium, plain faced cornice.

The staircase ceiling was by far the most important ceiling lost, as it had a large and heavily enriched cornice. The ceiling had a central, oval moulding with an outer broken oval moulding which became four corner panels. Inside the central oval was a heraldic cartouche of the Dashwood family crest and inside each corner panel was a griffon, which is also an emblem of the Dashwoods.

Skillingtons of Grantham were brought in to carry out the project and I have carried out the plastering, both plain and ornamental for them, along with their own plasterers.

Normally when tackling a ceiling, like the staircase at Claxby, we are either able to take measurements from parts of the damaged ceiling or we are given a set of drawings from the architect with all the necessary measurements on them. Sadly the whole ceiling was lost before any measurements could be taken, so all we had to work with was a photograph of part of the ceiling from an old issue of Country Life. From this photograph and using one small fragment of a salvaged moulding, I have set out the ceiling as closely as possible to the original.

Starting with the lath and plaster, oak laths were fixed to the underside of the joists and a coat of haired lime plaster was laid on; this first coat is called the pricking-up coat and is heavily scratched – hence the saying starting from scratch.

Once this first coat dried (two to three weeks) a second coat of lime plaster was laid on, which was levelled and floated with a devil float.

Rules could then be fixed to the walls and ceiling as guides for the cornice running mould.

The cornicing is carried out in much the same way as the flat plastering in three coats, with the final coat being a combination of lime and plaster of Paris. Once the cornice is in place the ceiling mouldings can be set out.

The ovals are run in situ using an implement called a trammel which was invented by Archimedes.

The outer oval is then cut at the intersection with the outer mouldings and joined to form the corner panels.

The heraldic cartouche and the four griffons were moulded in situ by a pargetter from Suffolk called Johanna Welsh. Jo is a third-generation plasterer with both her father and grandfather plastering before her.

The enrichments on the cornice consist of a line of stylized leaves at the top and an egg and dart at the bottom. Between these is a large dentil block with a small moulding running around the top of the block and along the cornice to the next block. The soffit between the dentils is coffered and in each is a small flower called paterae.

The plastering of the staircase ceiling has been both a trial and a joy but to see it back in all its glory is an image that will stay with me forever.

The plastering firm Gaches was started by Philip’s father Gordon in 1948 and Philip started his apprenticeship in 1979 under John Ford at Norwich City College.

Philip has run the firm since 1987 following death of his father. Philip has worked at the House of Lords, Downing Street, Windsor Castle, following the fire of 1992, Balmoral Castle and Chatsworth House. He also works and teaches in the UK and Europe. Philip can be contacted on 07957 565648.