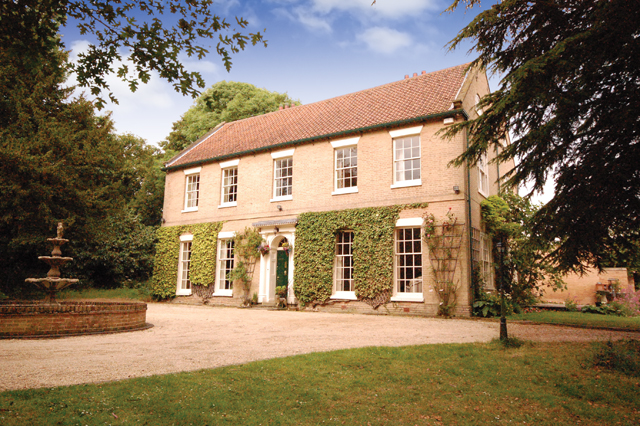 Restored to its former glory

For Philip and Esther Shoebridge, transforming Melton Ross Hall into a family home has been a labour of love.
The Grade II listed country hall at Melton Ross, near Barnetby in North Lincolnshire, was in a near derelict state when the couple first viewed it. Although it had planning permission to turn it into a hotel or residential home, the couple felt it would make a lovely home for themselves and their three children – Paul (now thirty-three), Michael (now twenty-six) and Grace (now eighteen).

Little did they realise that their decision to purchase the house in 1996 would lead them on a journey of restoration which would take up to nine years.

Philip, who is a partner in optometrists Edwards in Beverley with his wife, said: “We simply fell in love with the place. It had no neighbours, its own lake and water course, an abundance of wildlife and some of the trees in the grounds were spectacular, having been planted when the first part of the hall was built in 1750.

“We knew it would make a lovely family home, but it was probably the craziest decision we have ever made. The house was in a very sad state and like a sieve – there were more pots and pans in the roof to catch the water than in the kitchen and every time it rained water would run down the walls!”

Melton Ross Hall is believed to date back to the early nineteenth century and was understood to have been built for Marmaduke Greyburn, in grey Flemish-bond solid brick beneath a clay pan-tiled roof. An original hall is known to have stood nearby in the 1500s, although Philip understands that the current hall is a combination of one of the last remaining Lincolnshire longhouses and a front facade which was added in 1860.

The current house has twenty-seven rooms, with four reception rooms, ten bedrooms and four bathrooms on three floors; it stands in grounds of 9.77 acres with its own stream-fed trout lake, helipad and range of stables, tack rooms and garaging.

Once the purchase was complete, it took twelve months of building work before the family could move into the hall from their home in Elloughton, on the north bank of the River Humber. Even then they only occupied a few rooms, as it would be a further three years before the builders would finally leave. The sheer size of the property and the extent of the dilapidation meant that bringing the house back to its former glory was a mammoth task.

The builders began the restoration process by making the roof watertight – it took two-and-a-half years to replace 7,800 feet of roof tiles using traditional methods to meet with the Grade II listing. Each tile was handmade on the Humber Bank and featured the exact pattern of the original tiles.

Meanwhile, most of the floors and ceilings in the house had to be stripped back and replaced, and the sash windows remade. Philip said: “We were keen to preserve and put back as much of the original building as possible and so every single timber in the house is still there, but we floated new floors on steelwork around them.”

The couple employed local craftsmen to replace original decorative details such as cornicing and panelling. Philip added: “Much of the cornice work was damaged, collapsed or lost; the friezes and panelling had gone and the dado rails had been taken out. But the craftsmen we employed were able to reproduce these details using pieces we found on the floor.”

Unbeknown to the couple, the original grand staircase had been partly ripped out and replaced by a lift, and the galleried landing was hidden by a bedroom and bathroom. Philip said: “It was only when a lady who had lived in the house in the 1920s knocked on the door that we knew the staircase had been altered.

“She looked shocked as she told us how different the staircase had been when she lived here and she was able to draw it for us. By following her drawings, we found some of the original footprints on the walls and were able to reinstate the staircase back to its former glory.”

One of the most exciting finds in the house was a secret fifty-foot long passage way leading to the bedrooms on the first floor which runs the length of the original longhouse. Philip explained: “I’ve been told that there were times when they weren’t allowed to school children in Melton Ross and used to hide the children in the secret passageway. But the passageway also enabled the servants to access the bedrooms and would have joined up with a third staircase which we chose not to replace.”

As the work progressed, the couple were able to decorate the rooms and the kitchen – with its bespoke units and four-oven AGA – became the true heart of the home.

Philip said: “We wanted the kitchen to reflect a traditional kitchen in the 1800s, so we shunned fitted units in favour of a Welsh dresser and freestanding cupboards. The kitchen is the hub of the house and when we have parties it’s difficult to draw people away.”

While the work on the house was taking shape, the couple turned their eye to the land, bringing in a team of gardeners to landscape the grounds, re-seed the lawns, and dredge the lake and restock it with rainbow trout, bream and tench.

Although they employ a part-time gardener to keep the hedges tidy and maintain the vegetable garden, Philip and Esther cut the ten-acre lawn themselves. “My wife sits on a John Deere tractor with an eight-foot cutter and we cut all ten acres in four-and-a-half hours. You just plug in your iPod and off you go!”

The grounds themselves are a haven for wildlife and the couple have recently spotted a pole cat, as well as foxes, a pair of kingfishers and a pair of spotted woodpeckers.

“Renovating the building was a bit like painting the Forth Bridge and a real labour of love, but the house is now good for another 250 years,” Philip said. “The only time we felt we’d finished was when we put the carpets down two-and-a-half years ago! It was a time for great celebrations because at long last we were able to run around in bare feet.”

The family have certainly enjoyed their time at the hall. Philip recalls many charity fund-raising events for the Caistor Lions; his daughter’s sixteenth birthday celebrations, with a marquee on the lawns; and his son Paul being filmed for Yorkshire TV when he became the youngest person to fly a helicopter at seventeen from the helipad.

He added: “This is a very happy house and not creepy like some old places. At Christmas, we are one of the few houses that can have a twenty-foot tree in the hallway. We decorate it from each staircase and everyone’s jaw drops when they see it!”

But with their two sons already out of the nest and Grace leaving for university next year, the couple now feel the house has become too large for their needs. Philip said: “We are very happy here and don’t have to sell the place, but Esther and I can be at different ends of the house and not know the other is there. We’re hoping the right buyer comes along and makes this a family home once again.”

Melton Ross Hall at Melton Ross, Barnetby is on the market with estate agents Masons Rural and Equestrian for £1.25 million. For more information phone (01507) 350500.