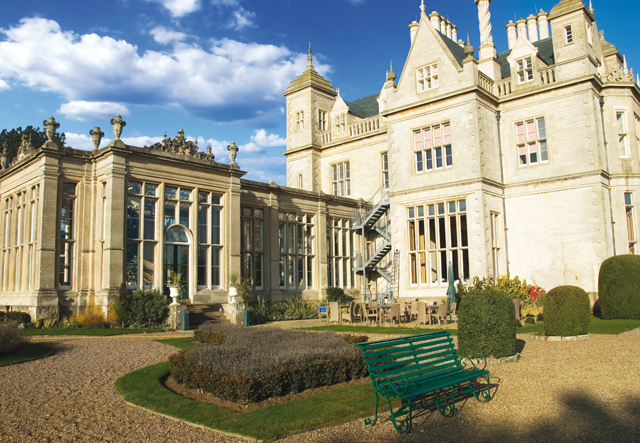 Steffie Shields highlights Stoke Rochford, a gem amongst local landscapes
November is, surprisingly, a wealthy month. A walk in a park, rustling dry leaves underfoot, pausing to admire burnished gold foliage and towering trees, makes you feel young again, a million dollars. If you’re looking for somewhere new to explore, or an outing to celebrate a family occasion, set your sights on Stoke Rochford, six miles south of Grantham, just off the A1.

Now a hotel, Stoke Rochford Hall overlooks a charming, undulating valley watered by the Cringle Brook, a spring-fed limestone tributary of the Upper River Witham. Might I suggest Sunday lunch or afternoon tea, followed by an exploration of the grounds? A phoenix risen from ashes, following a disastrous fire in 2005, you will wonder at the remarkable three-year restoration and discover a rich seam of Lincolnshire’s garden heritage.

Three Roman villas have been found, each with bath house, followed by several significant dwellings in this captivating location, built for the Neville and Coney families. Today’s place name dates from the fifteenth century, when a Rochford family arrived from Essex, where the 1086 Domesday Book records ‘Rochefort’, land perhaps originally granted by William the Conqueror to a Norman lord, de Rochefort. The word ‘stoke’ originates from ‘stoc’, Old English for ‘place’. From the moment you pass the South Lodge, by architect Anthony Salvin (1799–1881), present day Stoke Rochford offers, in spades, a breath-taking ‘sense of place’, largely thanks to the Turnor family.

In the seventeenth century, the Turnors, originally from Bedfordshire, built a grand house, long since demolished, located near the bridge. Two ghostly reminders of this period loom through trees in the park, originally stone frontispieces to the stables, one dated 1676, the other 1704. These eye-catching arches, ‘Heaven’s Gates’, frame views of magnificent veteran beech, oak, and lime – perhaps one of the finest, theatrical approaches in the county. After viewing the lower lake from the bridge, and a first glimpse of the distant mansion, the drive rises steadily winding towards a stone obelisk on the highest hill. Only then it turns at right angles to confront the visitor with the imposing Victorian hall (unfortunately marred by an ill-sited Sixties-built conference centre and today’s hotel car park.)

A grand wrought-iron screen, a ‘clairvoie’, and gateway bear the initials of Christopher Turnor who, in 1829, inherited more than 20,000 acres of Lincolnshire land at the tender age of twenty, and became probably the wealthiest commoner in England. Over a period of sixty years, Turnor encouraged agricultural innovation while creatively improving his estates. In 1841, doubtless inspired by the flamboyant architecture of nearby Harlaxton, Turnor commissioned the talented Scottish architect, William Burn (1789–1870) to build a fashionable ‘Jacobethan’ house of great scale, on a rise overlooking the water. Elaborate stone gables, obelisks, scrolls and pediments compete with the likes of Burghley. What is more, Burn had witnessed ‘Capability’ Brown’s maturing ‘natural’ landscapes, ‘river’ lakes and acres of lawn, with sentinel trees such as Cedars of Lebanon, punctuating both park and skyline. Consequently his picturesque model village nestling near the church, extensive oak and beech plantations, and on crossing the bridge, a fine ‘Tree of Liberty’ – a welcoming, open-armed sycamore – give a distinct ‘Brownian’ feel to the park, especially the serpentine drive and features heightening visitors’ anticipation. The obelisk, erected in 1847, commemorates Sir Isaac Newton, born at nearby Woolsthorpe Manor who went to school in Stoke village, before grammar school in Grantham, and doubtless explored the valley as a young boy. A stone inscription proclaims Turnor’s idea: ‘May the inhabitants of the surrounding district recollect with pride that so great a philosopher drew his first breath in the neighbourhood.’

William Burn collaborated with W A Nesfield (1793–1881), an up and coming landscape designer. Initially a trained soldier who fought under Wellington at Waterloo, and a much-admired watercolourist, Nesfield had an eye for scale and strong engineering of levels. His workmanship, later patronised by Prince Albert, dominated the Victorian era. His expansive terrace gardens, with steps and great stone benches set off the Hall, at the same time offering panoramic views east across the lakes and north over the park. A playful mermaid fountain catches the light in a sea of lavender, but sadly no sign of the statue of Diana, the Huntress, or any carved urns and other statuary that once peopled the scene among Dutch-style parterres and topiary hedging. Nevertheless, the ‘bones’ of Nesfield’s formal garden have stood the test of time.

The last Turnor to live at Stoke Rochford, Christopher Hatton Turnor (1873–1940) was also exceedingly creative in architecture, garden and estate improvement, and, having trained under the leading architect Sir Edwin Lutyens (1869–1944), notably designed the Watts Gallery in Surrey. At Stoke Rochford, he was responsible for the north lodge, a unique glass-tile fireplace in the hall, and carved Italianate scenes, that were once painted, all the way up the great staircase. The Ginkgo biloba, some maples and feature trees among the Victorian pinetum reflect his era’s fashion for Japanese gardens. He remained friends with Lutyens, who together with the influential garden designer Gertrude Jekyll (1843–1932), used to stay often at Stoke Rochford. Arriving once bearing a gift that she had made herself, an octagonal picture of ferns and flowers made from shells, Jekyll may have advised on plant selection for the flower borders and possibly the rose garden near the conservatory, though the old iron-wire rose arbours date from the mid-nineteenth century. She advocated careful ‘wild-gardening’ on the edge of woodland. Where previously a formal fernery was protected by glass, a more natural, shaded, rocky grotto area with hardy ferns has all her hallmarks, similar to a ‘Fern walk’ in her own, much-celebrated garden, Munstead Wood in Surrey.

Turnor’s passion for golf led to part of the park becoming a scenic golf course with splendid views of the hall. The club badge bears a witty motto, a pun on his name: ‘Turn Nor Swerve’. Nor was his great house for private use alone. In 1927 the gardens were first opened to the public to support the birth of the National Gardens Scheme (NGS) established by the Queen’s Nursing Institute in memory of their patron, Queen Alexandra, recalled this summer when the gardens opened for the NGS 85th anniversary celebrations. According to Turnor’s obituary in the Lincoln Diocesan magazine, ‘encouraged and helped by Mrs Turnor, he literally opened his house to all types of men, women and children of good will. It would be impossible even to record the names and purposes of the diverse groups which met there, sometimes for weeks… Lincolnshire teachers, working men, women and students, and even little children from the slums of Deptford, all of them had the open run of the great house and gardens, and in not one instance did any working man, teacher or child fail to justify the trust.’

Fittingly, (having been commandeered as headquarters for the Parachute Regiment’s Second Battalion, to plan the 1944 Arnhem ‘drop’), after the war the hall became a teacher training college, and subsequently came into the ownership of the National Union of Teachers as a conference centre. Look out for a champion, veteran ‘Tree of Heaven’, Ailanthus altissima. A yew enclosure surrounding a sunken croquet lawn, then tennis lawn and an amphitheatre for amateur dramatics, is now the setting for a memorial garden, dedicated in 2009 to Steve Sinnott, their inspirational general secretary who believed in the liberating power of education. Since being transformed into a hotel, conference and romantic wedding venue, staff tend a herb garden supplying the kitchen and, once more, bedding plants are being nurtured in the greenhouses. So the story continues. Whatever the season, Stoke Rochford is a simply sensational place.