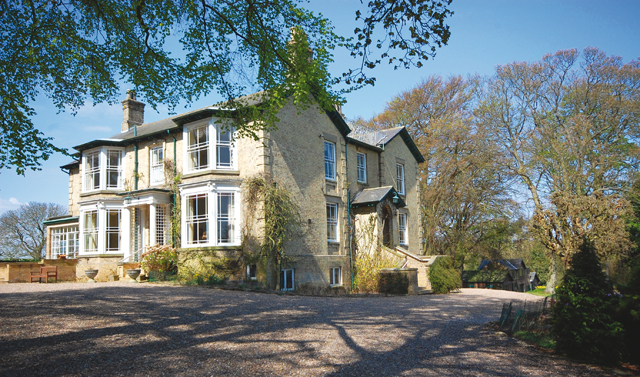 Set your sights on this gracious home

When David Nickerson and his wife Pam moved into The Manor at North Ormsby nine years ago, it was like coming home. The grand Victorian property five miles from Louth had been in David’s family since his parents Samuel and Connie bought the house in 1952 when David was just eight years old.
When his father Samuel Nickerson, who had been managing director of Nickerson Seeds, died in 2004, David and Pam decided to move into the family home.

Pam said: “David had many happy memories of his childhood at The Manor. It is a magical place. His family were great shooting people and he started shooting pigeons at the age of eight and continued shooting until he died in February this year.

“Although he enjoyed fishing and more recently a game of golf, shooting was his great love and he spent much of the season shooting at home or with friends.”

David came from a shooting family. His uncle was Sir Joseph Nickerson, from Rothwell, who was a ‘great shot’ as was Sam, David’s father – and David followed in their footsteps.

Pam added: “It was a difficult decision to move into The Manor for me, but not for David. He was very happy to move into his family home and he could see it would be the perfect place to host shooting parties.”

David and Pam were previously living at Acthorpe House in Acthorpe and running their gun wholesale company, David Nickerson (Tathwell) Ltd, from premises in Louth. The business imported shotguns from Spain and Italy and sold the guns and shooting accessories to gun shops countrywide. The couple also had their own commercial shoot at North Ormsby.

The Manor needed little work as it had been well cared for over the years although David and Pam set about having the house re-wired, installed a new skylight overlooking the Minstrel’s gallery, redecorated the sun lounge and morning room and installed a new kitchen by Habit Kitchens.

Pam said: “We inherited a really old Aga that was a terrible colour green but still worked. So we designed the kitchen around the Aga, installing green granite work surfaces, and now you don’t even look twice at it.”

The three-storey house sits in an elevated position, well away from the road, with views towards the coast and the Wolds. The house includes many traditional features including a double height panelled reception hall, six formal and informal reception rooms, a large panelled games room to the lower ground floor, original Art Deco fittings and six bedrooms.

A particular feature of the house is the double height reception hall which has oak panelled walls, a galleried landing above and a large glazed lantern allowing light to flood into the space.

The elegant kitchen has a range of cream painted units with green granite surfaces, a large island unit, a four-oven Aga in an unusual mint green colour, Servants’ Bells and a built-in window seat.

The mature grounds extend to 23.8 acres with lawned gardens, wooded walks, an orchard, kitchen garden, parkland and tennis courts. The outbuildings have the potential to be converted back into stabling and stores and further land is potentially available.

For many years, the couple’s time at the house revolved around the shoots which David was so passionate about. The stable block was converted into a game farm in which partridge and pheasant chicks were bred and the couple organised forty shoots a year on land around North Ormsby, between the end of September and the end of January each year.

When the couple sold the gun wholesale business five years ago, the game farm was closed but the shoots continue to be held by their keepers.

Last year, the couple turned The Manor into a bed and breakfast through Wolsey Lodges.

Pam said: “After we stopped hosting the shoots, it was so quiet here. I didn’t see anyone so I decided to rent a couple of rooms as a bed and breakfast and now I have to turn people away.”

The Manor was placed on the market last year and has attracted a great deal of interest. Pam added: “The Manor is an absolutely beautiful house, very private and it has been a wonderful experience to live here. At the moment, I’ve just come in and tumbled into a chair in the sun lounge which looks out to the front of the house and the paddock. There is no noise just the occasional tractor and it is just wonderful.”

• The Manor at North Ormsby, near Louth is on the market for £1 million. For more information contact estate agents Masons Rural and Equestrian on (01507) 350500.