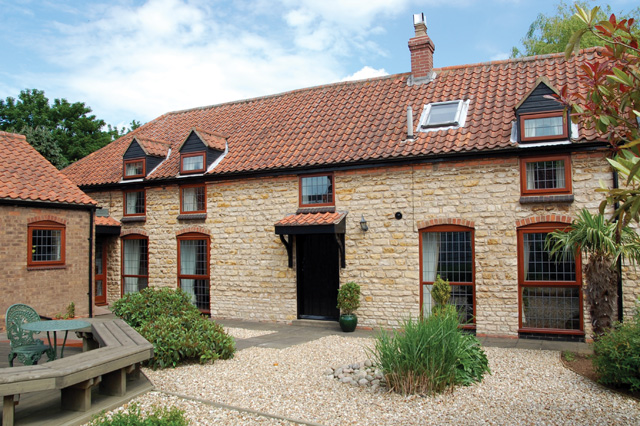 Setting a standard for conversions

For almost forty years, Maureen and Bryan Hill have lived in The Old Stables at Appleby, near Scunthorpe.
Dating back to the 1750s, the barn was converted into a family home in 1973 and is believed to be the first barn to have been developed for domestic use in the country.

Now both in their retirement, the couple have decided the time is right to move on and have placed their home on the market.

Maureen said: “This is a lovely family home and we’ve loved living here but our lives have changed now and we feel it’s the right time to move. We hope whoever buys our home will like it just the way it is.”

The Hills were living in a small three-bedroomed house on a residential estate in Scawby with their two sons, Matt (now 40) and Nick (now 44), when they decided they needed more space. But when their plans to buy a new build in Appleby fell through, they asked the builder if there were any old houses in the village which could be renovated.

Maureen said: “The builder showed us two old barns in their raw state which were owned by Lord St Oswald, who was then at Nostell Priory in Wakefield. We wrote to him and asked if he would allow us to buy and develop the barns for residential use.

“We were delighted when he sent us drawings and quoted us on one half of the barn and then the other.”

The two barns available were split into a stable block and four open garages on one side, and a pigsty, stable block and saddle room on the other. The Hills bought the latter half and the builder, Raymond Price bought the former, which he subsequently renovated as well.

“We got an architect to do the drawings and successfully applied for planning permission to convert the building,” said Maureen. “I didn’t have any sort of vision for the property but I never felt worried about it. I trusted the builder to do the best he could with it.”

The plans converted the stable block into a family home comprising the lounge, a hallway with galleried landing, large dining room and kitchen and four upstairs bedrooms. Then an extension formed a children’s play room, shower room and laundry, making the entire building an L-shape.

Maureen added: “The pigsty was too far away from the main building to incorporate it, so it is still in the garden.”

One of the stipulations of the planning permission was that the windows should be made larger. “We carried the original windows to ground level downstairs, to get ten per cent light, and upstairs we installed dormer windows to make the most of the natural light.

“The front door was opened up as well. We were keen to keep the building as original as possible so we left the interior stone walls as they were and tried only to alter features that were already there.”

The building work began in January 1973 and the couple moved in August of that year and immediately enjoyed living in their new home.

The canopied porch leads into the reception hallway with a double height vaulted ceiling, exposed beams and timbers and an open tread staircase leading to a mezzanine level landing. The living room has three full-length windows, exposed stone walls and feature brick fire surround, with wooden mantel and multi-fuel burning stove, and the large dining room leads into a breakfast kitchen with a range of solid oak cupboards and an electric Aga. A second entrance hall gives access to a downstairs sitting room, utility room and shower room.

Upstairs the galleried landing and all four bedrooms have exposed beams, vaulted ceilings and polished wooden floorboards and there is a spacious family bathroom.

Outside, a tree-lined gravel driveway leads to the front of the house with parking for several vehicles, and two large outbuildings are both set up as offices.

“The boys loved living here,” said Maureen. “It was so easy for them. There were the woods next door and they could walk down to the river in Appleby.”

Meanwhile, Bryan was busy with his work as the manager of a Sinter Plant at the Scunthorpe Steel Works, which was owned by British Steel. During his time there, he acted as project manager, building and commissioning a new plant on the site. He then worked at Immingham Docks as general manager of the British Steel terminal.

“In around 1996, Bryan moved a plant from Scotland across to America. He was there for seven months rebuilding the plant in Alabama before coming back to manage a terminal at Immingham,” said Maureen.

Maureen, a member of the WI, took on temping work and the couple threw themselves into the local community.

“We’ve enjoyed dinner and dances in the village hall, bonfire get-togethers, quiz nights and dinner parties, but we’ve also enjoyed the peace and quiet of living in such a rural location.”

Over the years, the couple brought in a landscape artist to design the low maintenance gardens and bought a strip of land off Paul Lane so the property does not share its boundary with the neighbours.

The couple both retired ten years ago and for two years Bryan worked from home in a converted office for his sons, who own NMD Creative Ltd in Albert Street, Brigg. Over the years, they have enjoyed long walks and cycle rides in the country, looking after their five grandchildren and trips away in their motorhome.