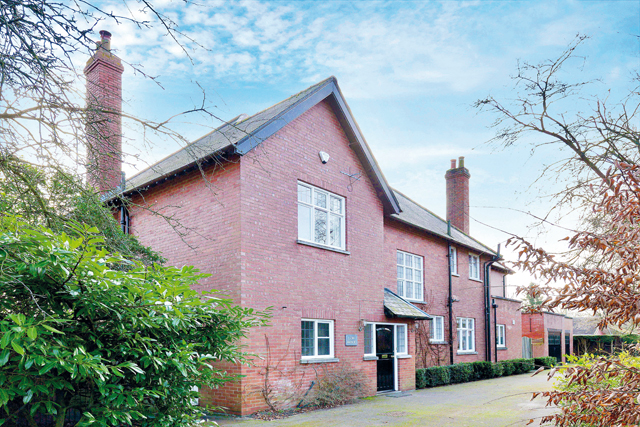 When Ed and Fiona Purkiss bought their home, Low Wood on Alverston Avenue in Woodhall Spa, it was the start a labour of love that lasted sixteen years.
In that time, the couple have completely refurbished the property, taking it from a tired and dark old building to the modern and comfortable family home it is today.

“It’s been lovely living here,” said Fiona. “We’ve made a few mistakes along the way but we have learnt to take it slowly and not to rush into anything. The results have definitely been worth it.”

With Ed working as a navigator in the RAF, Fiona and her three children Laura (23), Robert (18) and Matthew (16) were living in a house in Broadway, Woodhall Spa, which they had already placed on the market. When a friend of a friend told them that the owner of Low Wood was thinking of selling, they decided to pay her a visit.

Fiona, now a housewife who is working on her tennis but who previously worked as an estate agent in the village for seven years, said: “I had always wanted to live in this location and, as soon as the owner opened the front door, I fell in love with the house. I couldn’t risk losing it, so we did the deal on the doorstep!”

Low Wood had been built for the owner of the Petwood Hotel in Woodhall Spa and was looking a little tired. It had a small, dark kitchen designed for use by the servants and rusty Crittall, steel framed windows but Fiona, who is originally from Fulham in London, could see its potential and was particularly impressed with its large garden.

She said: “The garden was large and overgrown, but as a Londoner, it was amazing to see so much space.”

Once the sale was complete, the family moved into the property in 1995 and lived with it in its original condition for a couple of years while they deliberated over what to do with the house and in what order.

Their first job was to knock down all the walls in the kitchen, install French doors into the garden and fit a temporary kitchen. It was the first of three kitchens (a fact that Ed doesn’t like to be reminded of, Fiona joked), and it was only on their third attempt that they pushed the budget and had a bespoke kitchen by Chiselwood, designers and makers of the finest handmade kitchens and furniture, fitted.

Next, they removed the old Rayburn, and had modern radiators installed with contemporary cast iron fireplaces.

An en-suite to the master bedroom and an extra bedroom with another en-suite were then built above the extended kitchen and a derelict wooden garage was replaced with a brick one.

“Then we got boarded up!” explained Fiona. “We had all the original Crittall windows taken away to a company in Gloucestershire to be refurbished, recoated and then put back in. It meant the house was in semi-darkness for eight months and was hideous.”

The couple tackled the numerous other jobs needed to complete their project: the bathroom was replaced with a modern suite; two new en-suites were fitted; the house was re-plastered and redecorated; a new driveway was laid; the garden was redesigned (Ed is a keen gardener) and solar panels were installed in a two-foot parapet above the garage. “We are the only house in the Conservation Area with solar panels because the conservation officer agreed that they couldn’t be seen from the roadside,” said Fiona.

Two years ago, the new Chiselwood kitchen was installed. Fiona said: “A friend of mine had taken me into Chiselwood for a coffee and to look at the kitchens but it was out of her price range. A few years later my husband said we could have a new kitchen, because the old one wasn’t working, and I said I knew just the place.

“He was working away when we got the quote and I think he thought we were buying a new house, but by the time he had seen the designs he was happy with it. Two years later, it is everything I wanted – bombproof and easy to keep clean.”

After all the comings and goings of the builders, the hall, stairs and landing needed attention and earlier this year the area was decorated with new wallpaper and carpets.

With the house in a constant state of change, it has not all been plain sailing. Fiona admitted: “It has been testing at times, especially when you are trying to get three small children off to school with builders around, then coming home to find them still here and having to cook dinner around them.

“The hardest time was when the central heating was installed and for eight weeks the plumbers were in every room and all the floorboards were up. I began to hate the plumbers, I must confess! But usually the house has been big enough to decamp to other rooms while the work takes place and the results were definitely worth it.”

Now the property is a testament to all Ed and Fiona’s hard work. Nestled in 0.57 acres of south facing, mature grounds in a peaceful avenue in Woodhall Spa’s Conservation Area, Low Wood blends ‘original period features with luxurious modern lifestyle fittings’. The accommodation comprises a reception hall, morning room, drawing room, dining room and bespoke kitchen/family room, utility room and cloakroom to the first floor; whilst an open galleried landing leads to five double bedrooms, two with en-suites, and a family bathroom to the first floor. Outside, a substantial driveway leads to ample parking, a detached garaging block and workshop.

Despite the constant refurbishment works, there has been plenty of time for family life and some of Fiona’s happiest memories have been spending time in the garden with the children.

“My best memories are watching the children race around the lawn playing football and cricket while having a coffee on the terrace in the comfort of my own garden,” said Fiona, adding that growing up in Woodhall Spa had given the children free rein to go to play sports, shop or go to their friend’s houses on their own in relative safety.

The family have also enjoyed being part of the local community. When the children were younger, Fiona was involved in the Woodland Wizards Playgroup and was chairman in 2000 when they successfully bid for Lottery funding to build a new playgroup.

Robert and Matthew used to play football for Woodhall Spa and now Robert plays cricket for the local team and Matthew plays for the First Hockey Team in Horncastle. Meanwhile, Ed and Matthew are keen campanologists, practising at the church in nearby Coningsby.

With Laura working as an environmental geoscientist in Bristol, Robert at university and Matthew soon to flee the nest, the couple have decided the time is right to sell their beloved home in preparation for a new adventure.

“I said I would never leave and it has been a real labour of love,” said Fiona. “But now the children have nearly all left home, we can finally take a foreign position and have some fun before the grandchildren arrive!”