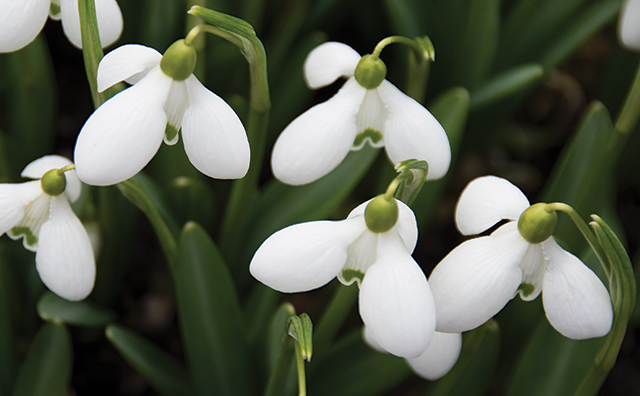 Steffie Shields highlights the wondrous varieties of snowdrop to be found in gardens open to the public this month.
After an overload of fake news, here’s some fascinating, real news! Kew Gardens researcher, Dr Aaron Davis has, together with two collaborators from Turkey and Ukraine, recently discovered a new highly fragrant snowdrop growing in red clay soil near the city of Bursa in the Marmara Sea region in north west Turkey. They named it the Bursa snowdrop, Galanthus bursanus.

Dr Yıldız Konca reported: “This is a beautiful and exciting new species. It is incredible that we are still finding new species of snowdrop in Turkey in the twenty-first century. However, this is a very rare species and if we don’t work towards effective conservation, it could become extinct within a few decades.”

Since deforestation, conversion of the surrounding habitat to crop land and climate change all combine to endanger survival, its status has been assessed as ‘Critically Endangered’. Unlike most other snowdrops, the Bursa snowdrop flowers in the autumn and, equally strangely, without its leaves.

Snowdrops are surprisingly more complex than most of us realise. If you are aware of our natural environment, and follow this month’s snail pace awakening from dank, drab and decaying gardens, then these fragrant, miniscule miracles of nature pack a more potent magical punch than the best Harry Potter wizards can conjure.

You might become fascinated and surprised by subtle variations. This is the ‘Spot the Difference’ game that smitten galanthophiles play. You can even play it here by comparing my photographs! Notice the range of shapes, single or double features, varying marks and ovary colours. However, it is more fun, and much better for you, to explore the great, invigorating outdoors. (See sidebar for details of the local popular snowdrop gardens open to the public this month and serving welcome refreshments.)

“One small step at a time,” Her Majesty the Queen’s Christmas message reassured us, how to cope with life’s hard knocks. After enduring low energy from far too short days indoors, stir yourself to venture outside, a small step at a time, slow enough to study these gentle flowers individually. Wrap up warmly, wear proper boots or footgear, and put your mobile phone in your pocket to record those unusual, special, ‘new to you’ flowers you come across. Take a magnifying glass or your reading glasses, if necessary. Some garden owners like to create displays of their most-prized plants in clay pots, lining them up as a ‘theatre’ collection. The rare, special bulbs might be helpfully labelled, as if clues in a treasure hunt, names that you can note and later look up on Google to learn their origins, naming history and differences in care, growth habit and, importantly, compare prices.

Do you remember those first family card games we used to play when knee-high to a grasshopper? Snap, Beggar my Neighbour and the Memory Game were all designed to make us recognise colour and shape, and differentiate between numbers, the four suits, and the ranks and sexes of the most significant cards, including the Joker of course. Such harmless games helped to engage and exercise our growing brains by stimulating thought and demanding concentration. A ‘Hunt the Snowdrop’ game will similarly improve your health and mental agility and might also amuse your grandchildren.

Here are a few tips to help discern the identity of those plants that differ from the common, ubiquitous snowdrop, Galanthus nivalis, or ‘flowers of the snow’ with narrow, strappy leaves. Firstly, the Galanthus elwesii perennial, also known as the greater snowdrop, displays longer, nodding, solitary white flowers in late winter, with broad blue-green leaves that are relatively easy to pick out. G. ‘Marjorie Brown’ (elwesii variety) is a vigorous form with blue grey leaves. G. ‘Natalie Garton’ (elwesii variety) has generous flowers displaying a bold inner mark, and is classed as a semi-double, but the extra petals detract from the simplicity of the flower. G. ‘John Tomlinson’ (elwesii variety) has a very large flower with pale green inner segments and often pale green lines on the tips of the outer petals. Meanwhile, possibly the largest of all snowdrops, G. ‘Big Boy’ (elwesii variety) also has light green lines at the apex of the outer segments, but a solid deep green mark on its inner petals.

Secondly, here are a few select hybrid single snowdrops to add to your ‘want’ list, though you might have to save up in order to buy them! G. ‘Little Dorrit’ has globular flowers dangling like miniature Japanese lanterns and round ovaries. The rare G. ‘Armine’, named for Brigadier Mathias’s daughter, is tall with both a green horseshoe-like marking and a green V at the base on the inner petals. G. ‘Pear Drop’ is a choice snowdrop. Notice long tapering outer segments hanging from a long claw, and a deep green U inner mark with paler arms. Another striking hybrid snowdrop, G. ‘South Hayes’ is beautifully marked on the outer petals and with a solid green inner mark.

Then there is the best known yellow-cap, ‘lutescent’ form of single snowdrop, G. ‘Bill Clarke’, originating from the Crimea, better known as ‘Wendy’s Gold’, which with both its marks and ovary typically an egg-yolk colour is easy to recognise. Finally, a strong, vigorous yellow nivalis-type hybrid, G. ‘Spindlestone Surprise’, (originally G. lutea) known as the Northumbrian snowdrop is perhaps my all-time favourite. I first photographed it forty years ago in Spindlestone near Bamburgh, in a garden owned by the daughter of the botanist who first discovered this unusual gem in an abbey garden west of Alnwick. I have never forgotten its eye-catching yellow caps and yellow marks on the inner petals.

I agree with TV gardening guru Christine Walkden, who recently enthused, “Gardening is about life – it teaches you to look and it teaches you to appreciate.” Some garden owners set off snowdrop drifts and pools like spilt milk with colourful clumps of glorious purple croci, captivating early miniature daffodils, pink cyclamen and deep blue iris reticulata species. Heading out to pastures new with my camera, I continue to challenge and hone my observation skills, as with those childhood Spot the Difference quizzes I enjoyed. Snowdrops have the power to lift people’s spirits more than the most dazzling, digital, Christmas light display. As if painted individually by hand with a fine brush, they provide a precious, visual treat and a cultural experience every bit as stimulating as a Van Gogh or Raphael. In truth, every snowdrop is a work of art.