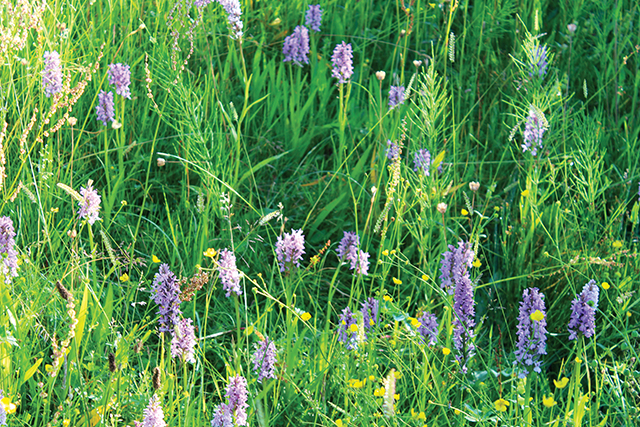 Brightwater Gardens will be open on Fridays, Saturdays and Sundays until 30th August, 11am to 4pm. Visitors can stroll through eight acres of gardens in full summer colour including the Prairie Garden. Afterwards, enjoy self-service refreshments in the Hay Barn. (Catering subject to Covid-19 regulations.) Wear suitable outdoor footwear, there is plenty of parking and mown grass paths. Entry: £5 adults, children under 16 £2. Brightwater Gardens has achieved the Visit England We’re Good to Go accreditation.

Chris and Jonathan also established Brightwater Green Burial Meadow, which is located on an 11 acre site a short distance away on the edge of the next village. The meadow opened in 2009 and offers a wildflower meadow and woodland setting as a final resting place.
“We have hosted burials during the past year within Government guidance and are thankful that we have been able to give each family time to say farewell in an unhurried and very special way”, said Jonathan.
Recently the Hay Barn could once again be used for refreshments after the ceremony. Brightwater Green Burial Meadow is a member of the Association of Green Burial Grounds.

Caroline Bingham visited Brightwater Gardens, Saxby, to see the wildflower meadows that are home to eight species of British orchids.

It is more than five years since I last caught up with Chris Neave and Jonathan Cartwright in their magical, eight-acre, garden of ‘rooms’. With their collie dog leading the way, we took the opportunity, while the rain held off, to head out past the more formal architecture of the Cathedral Garden of pleached limes and the rose covered pergola close to the house, to the open spaces beyond where the wildflower meadows were in full bloom.

This 21st-century garden has taken Chris and Jonathan more than 20 years to create on land which was part of the farm which Chris’s great grandfather came to as a tenant in 1885 and bought in 1917.

The present-day Garden House and Brightwater Gardens has been built on the site of a bungalow previously occupied by Chris’s great aunt, Annie Neave.

“My aunt was an enthusiastic cottage gardener herself,” Chris explained, “so she really chose the site which we expanded by redeveloping paddocks and removing lots of nettles and thistles.”

The first meadow areas we visited flow along the contours of the escarpment on which Brightwater Gardens sits. Just 10 miles north of Lincoln, there are panoramic views across the upper Ancholme valley towards the city. “One of the misconceptions of creating wildflower meadows is that all you have to do is stop mowing the grass,” said Jonathan. “Ah, if only it was that easy!” It has taken 12 years for the meadows to mature enough to support the variety of species which have flowered this year.

The garden is south facing on hungry, sandy soil but the fertility of the meadows has been further reduced to suppress grass growth by the planting of species such as yellow rattle. The first orchids Chris and Jonathan planted were given by friends who were emigrating to Bulgaria. “We began with around 10 specimens of British native orchids and knew that they would thrive if the correct mycorrhizal fungi, which supply organic compounds to the plant, were present in the soil. This has taken many years to achieve but patience and lack of disturbance or trampling of the ground is now showing wonderful results.”

My eyes soon adjusted to spotting the magical, tropical looking blooms in amongst the grass. Jonathan pointed to a beautiful and exotic native slipper orchid. There are also pyramidal, common spotted, common, bee, and northern and southern marsh orchids to be found growing at Brightwater. “Common orchids (Dactylorhiza fuchsii) cross-pollinate prolifically so you can get interesting hybrids appearing. As plants become better established, they grow taller and stronger – our initial small collection has now increased to more than 1,000 plants,” explained Chris.

Native British orchids have long been recognised as exceptional within the wider flora of the UK. Many of their names refer to the plant’s ability to ‘shape-shift’ to mimic insects, living creatures or even human features, some of which have a decidedly more risqué association with human anatomy. This has only added to their enigma and fascination.

Carefully tended in pots close to the house was a collection of strikingly attractive Bletilla striata (Chinese ground or hyacinth orchids), too tender to tolerate the winter ground conditions at Saxby.

I wanted to know how Chris and Jonathan had spent the long months of lockdowns when the gardens were closed to the public. “Last year gave us a wonderful opportunity to improve parts of the garden,” said Chris. “Of course, we missed the groups and visitors but we have undertaken some larger scale work such as lifting the canopy of the woodland to give more light to the bluebells and lowering the height of the beech hedges to once again restore the seamless blending of the views from the gardens into the surrounding landscape.” Jonathan paid a painful price while disposing of some of this foliage, severing half a thumb in the shredder.

They also improved many of the borders, including planting in the Prairie walk, which will all be at their best this month. “The perennials were given their ‘Chelsea chop’ in late May so we are looking forward to a real burst of colour in August. There are also swathes of elegant grasses, including varieties of deschampsia, carex, molinia and fescue.”

We had by this time walked to a second area of hillside with a Lavender Walk, a dramatic Obelisk Garden, the Prairie borders and more areas of casual meadow planting where more orchids had naturalised. The garden has been designed so that whatever the season there will be areas which are at their best, so there is always something to see. Whether you visit in spring and see the swathes of the more than 150,000 bulbs planted by Chris and Jonathan, visit in the summer when the borders are bursting with colour, or wander through the native tree woodland, there are always fantastic displays.

As we approach the height of the season do go along to enjoy this exceptional garden.