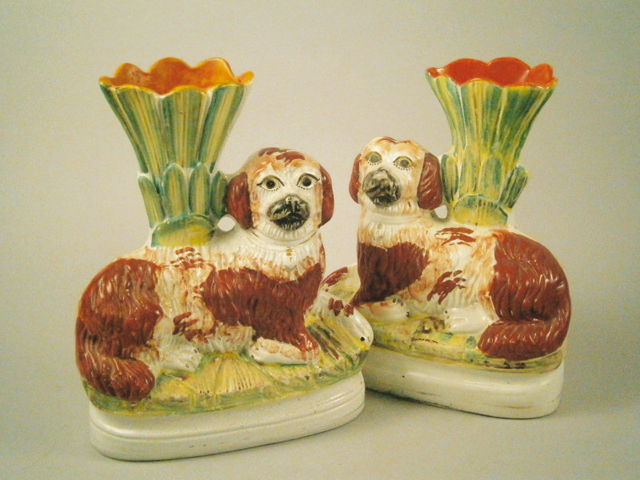 Staffordshire Pottery was manufactured around the towns of Stoke-on-Trent and Burslem, as the region was well resourced with coal and clays.
By the Victorian era, a new type of Staffordshire ornament had emerged. Sometimes known as a flatback, it was a decorative model or figure produced in large quantities and made in varying degrees of quality. These ornaments decorated the parlours and drawing rooms of most Victorian homes.

By the mid-twentieth century, collectors began to take an interest in basing their collections on themes such as royalty, politicians, animals or sports. By the 1980s Staffordshire ornaments had become well associated with antique collecting, with the pair of Staffordshire Pottery King Charles Spaniels instantly recognisable. Later in that decade, with changing fashions and reproduction models flooding the market, demand started to decline along with prices. The auction price for a pair of King Charles Spaniels slipped from hundreds to tens of pounds.

The market struggled along, with only very rare figures attracting the serious collector, but over the last few years demand seems to have noticeably improved, no doubt with the help of recent, popular TV programmes and the emergence of online bidding at traditional auctions.

Illustrated are a number of auction results from recent sales, as prices again achieve hundreds of pounds and look set to break into four figures soon.