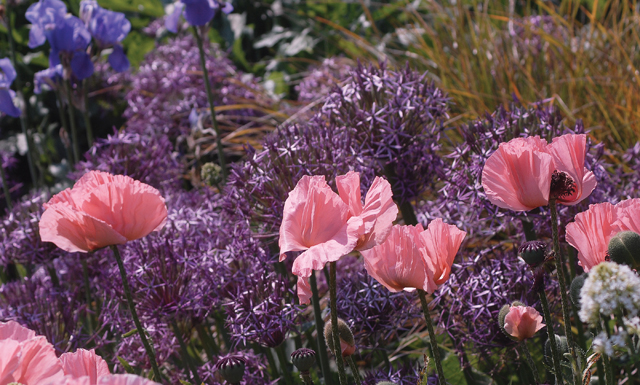 Stars in your eyes

Steffie Shields recommends alliums, summer’s sparklers!
A great Chelsea this year again, stimulating thought and visual excitement like no other show. This year, it seems the ‘in’ colour is purple, a colour designed to attract attention (and, perhaps interestingly, the colour, with yellow, of the UK Independence Party – which, lately, rather proves the point!)

Ranging between red and blue, somewhere between crimson and violet, apparently purple is the colour that occurs least in nature. Is that why the Roman emperors wore purple?

Royal purple or imperial purple is a natural dye, a secretion produced by a certain sea snail species. It was expensive and greatly prized in olden times because the colour did not fade easily, and seemed to become brighter with weathering and sunlight. In Chinese painting, purple represents the harmony of the universe, a combination of red and blue – Yin and Yang.

All this has set me thinking about the various purple plants in my garden. Call me old-fashioned, Clematis jackmanii remains for me the king; a right royal performer enriching my vistas every year without fail. However, when it comes to a summer flower show, my border can be like Britain’s Got Talent – a mixed bag, something for everyone, plenty of colour, but not necessarily any star material in the mix; or “All the right notes but not necessarily in the right order,” as Eric Morecambe would say. What to plant when you are looking for that extra sparkle, a quality star of the show to make a statement, bring harmony and stop the postman in his tracks?

The answer is alliums, those herbaceous bulbous perennials – but not just any alliums will do. Many are smaller and late spring flowering such as Allium brilliantissimum, or Allium ‘Purple Sensation’. Yes these have super, rich colour but smaller flower roundels. You need quite a number to make a show. Save your pennies for Allium cristophii, known as the Star of Persia, and plant them in the autumn in full sun. Then here in Lincolnshire, they will flower from mid-June to July. A hardy perennial that anyone can grow, it thrives whatever your soil, and is mostly pest-free. What is more, a successful ’purple patch’ that will last for decades and will be adored by pollinators – it is worth the investment.

After trials, the Royal Horticultural Society has given Allium cristophii an Award of Garden Merit, or AGM, a mark of quality awarded to garden plants. A surefire winner, cristophii has the look, but not necessarily the perfume! As a member of the onion and garlic family, it has a strong hint of things culinary. Its glaucous strap leaves begin to wither and die down, which can cause the gardening beginner concern. No need to worry, and no need to prune, unless you prefer to tidy away the decayed leaves. That is its normal habit, leaving the star-studded umbels of rosy-violet flowers to open, take the floor and sway in the breeze. They appear in the border like exploding fireworks in the night sky.

Colour-wise these silver-amethyst jewels will fit with any shade of red, from red or pink oriental poppies and mauve salvias to royal blue hardy geraniums. In a fiery red border, Allium cristophii is like a bursting fizz of flowers, an effect that lasts for months. Imagine them with Astrantia ‘Gill Richardson’, that wonderful, large, cherry-red astrantia, named after the gifted Lincolnshire gardener.

Some spray the dried heads and use them indoors for contemporary decoration in a minimalist setting. Indeed they make good cut flowers but they are such a feature in the garden, I can never bear to bring them indoors!

The starry globes are at least 10 to 12 inches (30cms) in diameter, on bare stems that are up to two to three feet (50 to 60cms), perfect for the front row of the stalls, or front of stage in your summer herbaceous border. If you are thinking of accompaniment, I have noticed on my garden travels, a couple of combinations that work magnificently and memorably. Team it with Stipa Tenuissima – a striking, feathery Mexican grass that has been described as ‘The glue that holds so many sun-baked borders together’. The upright allium stems are then lost amidst the grass, and the purple umbels of flowers appear to float on a sea of fluffy architectural grass. Alternatively, pair them with magenta spikes of ‘Gladiolus communis subsp. byzantinus’, a wildflower found in Mediterranean olive groves flowering in June and July. They too are planted in autumn – so add them to your shopping list, a combination guaranteed to thrill the eye in 2015.

When you next visit a garden, notice if there are any alliums and see how they make a border sparkle. You will find them performing in the great herbaceous borders of Gunby Hall, and Holywell Hall and I daresay many a garden open for charity. Some say each allium has a flower network just shy of a hundred. So, rather than pulling daisy petals, get your children and grandchildren to try and count the flowers on one sphere in the long, lazy school holidays. They too will love these summer sparklers!