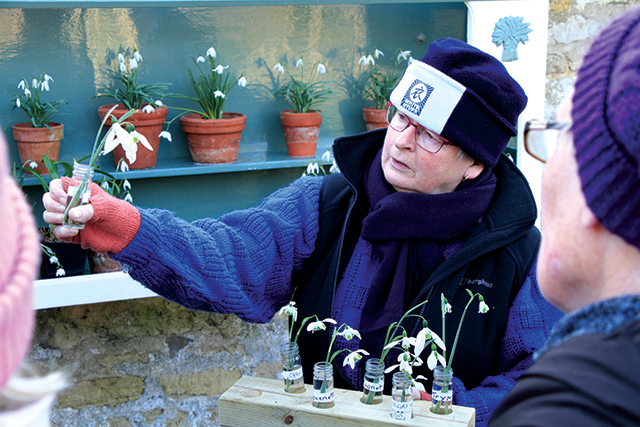 Steffie Shields meets snowdrop expert Jackie Murray.
No need to diet to shed those extra festive pounds; burn off those calories with a walk on the wild side. Nature offers a perfect escape, as snowdrifts of pristine ‘milk-flowers’ (translated from galanthus) miraculously push up through frozen ground in the woods. February is perfect for practising the latest out-of-doors dancing craze – the winter floral dance: the ‘snowdrop stoop’!

Check below for a list of local gardens for this month’s openings and join in. An uncomplicated, invigorating dance to learn, alone or in a group, step out briskly with eyes to the ground. Choose a moment to stop, stoop to conquer a better view of every detail of just one nodding specimen. Straighten up, with head and shoulders back, stride out again. Repeat as many times as you feel inclined, breathing in the fragrance, especially strong when wintry sun warms the day, empowering us with hope.

Best of all, a vital exercise for developing core strength, if age and health allow you to keep your balance, tackle the snowdrop ‘squat’, a compound, full body exercise for the muscles of thighs, hips and buttocks, as well as strengthening the bones, ligaments and tendons throughout the lower body. Useful if you wish to take a steady close-up with iPhone or camera, bend the knees to record the best and most pristine bloom, to spy the unique green, or more unusual yellow, markings. Practice with gentle, shallow squats at first, making sure your knees align with toes facing slightly outwards. Then, if back and knees allow, slowly attempt a deep squat with hips at or below knee level, and buttocks resting on the back of the knees.

Recently I met up with Jackie Murray, an expert snowdrop collector or ‘galanthophile’ well-versed in and gearing up to repeat the annual ‘winter-dance’ routine. An active member of the Alpine Society, she lives with her photographer husband Pete Murray in Little Bytham. Originally from Somerset, they met reading plant biology at Hull University. Love of plants is in Jackie’s genes, with both grandmother and mother great plantswomen and avid gardeners.

The Murrays are retired teachers and conservationists who travel widely, give talks and hold workshops. Both are education officers involved in the Osprey Project at Rutland Water. No surprise, Jackie’s garden features the tall Rutland snowdrop, collected and named a century ago by the renowned horticulturalist E A Bowles (1865-1754) from Squire Burrough’s Ketton garden. Galanthus ‘Ketton’ has narrow, erect leaves, large flowers and two small spot markings inside.

On 14th February, Jackie will share her expertise on an exclusive snowdrop walk (sold out) of Easton Walled Gardens, a splendid historic garden which she has supported since a brave restoration started at the turn of the millennium. Every garden should have these wondrous small bulbs. Avoid planting in waterlogged areas. When inclined, every five years or so, simply lift, divide and thin overcrowded clumps when dormant – best after flowering in March or April. Given time, and very little effort, your joy will increase as they naturalise.

Jackie showed me her attractive, booklet Snowdrops, first published ten years ago, with its second edition still available (Green & White Publications, copies £5 available at www.pm-images.co.uk). Usefully pocket-sized for easy reference, when out visiting snowdrop gardens, its clear information and stunning photographs facilitate snowdrop identification. Jackie has many in her collection hybridised and named by local gardeners, equally passionate, such as John Curtis in Hacconby who has inspired many Galanthophiles in south Lincolnshire.

With dusk fast descending, Jackie took me out to her sloping garden to show me some early specimens, spread amongst informal, stone-edged terraces. The rare, Christmas flowering Galanthus plicatus ‘Three Ships’ which I had not yet encountered was just poking its spathes up. Also seeing Galanthus ‘Peter Gatehouse’ made my day!

As for steam train enthusiasts or stamp collectors, there is a great deal of fun in ‘spotting’ snowdrops. Always look at leaves first. Are they narrow straps “like two hands in prayer”, as Jackie describes them? Common ‘nivalis’ (Latin for spring). Are they wide and grey green? ’Elwesii’, or with folded over edges? ‘Plicatus’. Are the flowers single of double? Carefully inspect the petals in both form and size. Are they flared? Are the markings on the inside three petals green or yellow; shaped like an arrow or a Chinese bridge and so on. Jackie told me, if she could only own one, her ‘desert island’ snowdrop would be one, by coincidence originally hybridised in Somerset in late Victorian times. The flower dangles from a long, fine stalk, “such an elegant, long-flowering good ‘do-er’, dancing in the breeze like a butterfly, the classic: ‘Magnet’.”

The National Gardens Scheme now runs an immensely popular Snowdrop Festival: “During our first Snowdrop Festival in 2016 many of our garden owners were overwhelmed by the number of visitors that attended their openings.”

In February, more than eighty snowdrop gardens around the country will open for charity, some with up to 300 different varieties of snowdrops, others mixed in with hellebores and early spring flowers (www.ngs.org.uk).

Snowdrops by the million carpet a romantic woodland setting at Horstead House in Norfolk amongst winter flowering shrubs. The Beeches in Nottinghamshire has 250 named snowdrops together with hellebores and early daffodils.

The 100-acre Anglesey Abbey Garden (National Trust) near Cambridge has more than 240 varieties. You might spy Galanthus lagodechianus, a rare variety in Britain and possibly a relic brought back by soldiers from the Crimean War (1853-1856), one of seventeen discovered by Head Gardener Richard Ayres on the site of the garden’s Victorian rubbish heap.

A word of warning: there is no cure from this grand but obsessive winter caper, as Jackie and I know only too well. Although catching, strictly speaking snowdrop fever brings nothing but pleasure, bar a modicum of stiffness in the joints, if you step out in search, and stoop and squat with the best Galanthophiles. I guarantee a boost to both mental well-being and fitness, maybe even weight loss – especially if you are drawn to spend on potted specimens like ‘Magnet’ that will need setting loose in your own gardens!