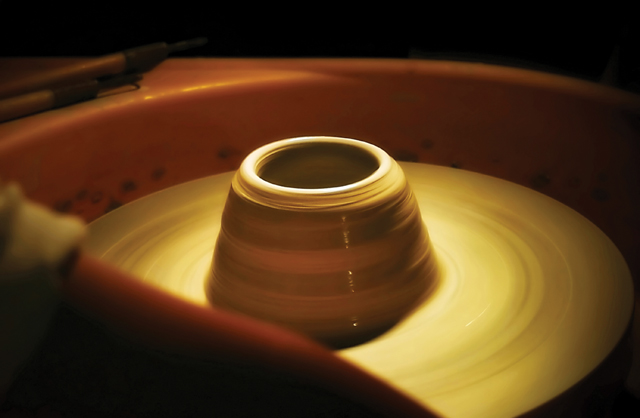 The early twentieth century saw a revival in the making of handmade and hand decorated ceramics. Perhaps the most famous potter during this period was Bernard Leach (1887-1979) who started his studio in St Ives in 1920 with his friend and fellow potter, Shoji Hamada (1894-1978).
This small pottery at Stennack was to become a breeding ground for many of the country’s leading exponents of the art, as well as many world-renowned potters. Leach’s most famous apprentice was his very first, Michael Cardew. He revived the technique of slipware, used heavily in the seventeenth century by masters such as Thomas Toft and Ralph Turner. Other notable names who trained at The Leach Pottery were Harry Davis, Richard Batterham, Katherine Pleydell-Bouverie, Nora Braden, David Leach and Michael Leach (his sons), Janet Leach (nee Darnell), Warren MacKenzie and Len Castle.

The Modernist movement within studio ceramics commenced in the late 1930s. Lucie Rie was notable for plain forms, using glazes in a subtle layered way, working in both porcelain and stoneware. Hans Coper shared a studio with Rie from 1946 and worked with her on many pieces. He also developed his own distinctive style. He created his pieces by joining elements thrown on the wheel. These multiple forms were known as ‘Thistle’, ‘Poppy’ or ‘Spade’.

The sculptural ceramics movement sprung up in the 1950s out of the arts colleges of Britain. James Tower is perhaps the best known exponent. His work has a painterly artist’s quality. The leading contemporary exponent of this art is Lincoln born Gordon Baldwin.

Notable prices at Golding Young & Thos Mawer’s studio pottery sale on the 15th February were £150 for a stoneware dish by Ray Finch of Winchcombe, £190 for a Rosemary Wren pigeon and two other birds and £740 for a sprung bowl in sancai oxidised stoneware by Takeshi Yasuda and £420 for a Japanese influenced charger by David Leach, son of Bernard Leach.