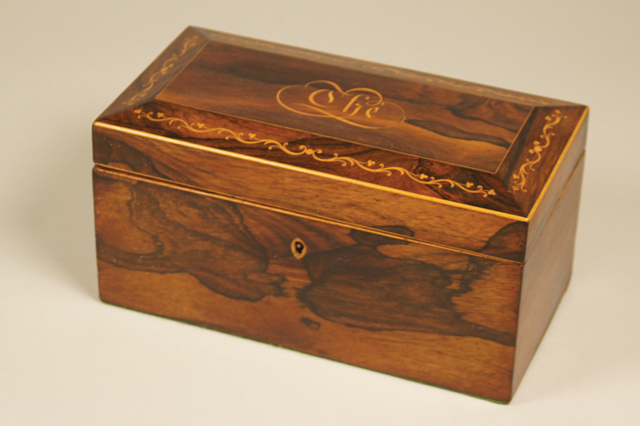 Richly hued rosewood furniture regularly appears for sale in auction rooms across the country.
This hardwood has dark streaks giving it a distinctive figuring when used to make polished furniture and has a strong, sweet smell which persists for many years, explaining its name.

Popular from the early part of the nineteenth century, the Georgian Regency period and throughout the Victorian era, the strong nature of the wood, along with its decorative properties, made it most suitable for dining and drawing room furnishings, as well as small items and musical instruments. It is also often combined with other woods as a veneer banding or marquetry inlay.

All rosewoods belong to the genus Dalbergia and there are two main sources – ‘Dalbergia nigra’ from South America and ‘Dalbergia latifolia’ which is native to India and known as (East) Indian Rosewood.

Over logging and production in the twentieth century has led to ‘Dalbergia nigra’ becoming a CITES (Convention on International Trade in Endangered Species of Wild Fauna and Flora) listed endangered species meaning that post-1950s items may need licences to be sold or exported.

At the 150th Anniversary Auction at The Lincoln Auction Rooms of Golding Young & Mawer, several items made of rosewood were sold. The highest price achieved was £1,200 for a William IV rosewood chiffonier by T&G Seddon, which was the top of its £800 to £1,200 estimate. Meanwhile a George IV rosewood breakfast table made £400 and a Victorian rosewood footstool sold for £220.

In the same sale, a later nineteenth century French rosewood double bed sold for its top estimate of £150; a William IV rosewood and mother of pearl inlaid table cabinet made £100; and a Victorian rosewood and marquetry tea caddy was purchased for £95.

One of the smallest items, a late nineteenth to early twentieth century Indian Vizagapatam-style rosewood and ivory inlaid hexagonal tea caddy sold for £50, just above its £30–£40 estimate.