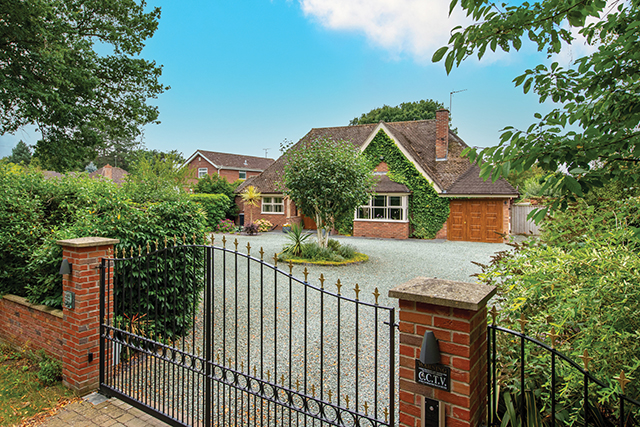 This unique four-bedroom house offers an abundance of striking features together with kerbside appeal within a much sought after village location close to the English Golf Union.

Situated in a prime position within the pretty, historic village of Woodhall Spa, this outstanding property, with four spacious bedrooms arranged over two floors, has been thoughtfully upgraded to a high standard and further enhanced with a number of appealing features.

Businessman Paul Kimsey and his partner Gail Charlesworth moved here 20 years ago with son Nathan, who is now a professional golfer, and the family is full of praise for village life.

“We moved to Woodhall Spa, which we knew was the jewel of Lincolnshire, for many reasons, including the opportunity of an excellent education at the renowned St Hugh’s School, as well as being close to the English Golf Union and golf course – as even at the age of eight, Nathan was an aspiring golfer,” explains Paul. “He was welcomed into the junior section run by Barry Chapman, who was incredibly influential in Nathan’s success and attitude, which led him to represent Great Britain in the Walker Cup.”

The family say they chose to buy this property primarily for its position, being on a quiet road opposite woodland and close to the many village amenities, including Jubilee Park, with its tennis club and swimming pool.

Thought to date back to the 1950s, this well presented house, which has been carefully modernised, offers versatile living with high levels of attention to detail evident from the moment you step inside.

“Over the years, we have extended the property by 40% and renovated both the outside and interior to an extremely high standard. We had builders here for almost three years and they became very good friends, in fact almost family!”

With the extensive renovations, all four bedrooms have been extended and now each one features a stylish ensuite.

“With an extension to the right of the property – which incorporated a change to the roofline, which in our opinion, didn’t do the property justice – this allowed one bedroom to be extended and an ensuite incorporated, which also gave room to include an office, which I use when working from home.

“We have a large kitchen and dining area, which is often the hub of entertaining and we expanded the kitchen to incorporate a utility room and pantry, something Gail always wanted.”

Paul explains that the couple share a passion for travelling and they have picked up many ideas for designs on their journeys around the world.

“We have been lucky to stay in some really nice hotels and we have incorporated some beautiful and quality designs and material ideas within the renovations.

Paul and Gail agree that the “jewel of the property” is the “spa room”, which extends to the rear of the house overlooking the back garden.

“This was originally an old leaking conservatory and we extended this, incorporating a huge 5m sky pod and bi-fold doors, wrapping around both sides of the room. When opened, it lets the whole of the garden and outside space in.

“We have a hot tub within this area which is lovely to sit in, overlooking the garden and Pete incorporated some unique light oak features with beautiful LED hidden lighting features.

“The spa room is a beautiful, calming space all year around which you can enjoy every season.”

The renovations both inside and out have been extensive, with everything done to the highest exacting standards.

“We often said to ourselves, it would have been cheaper to buy another property, but we love Woodhall.

The position is in our opinion one of the best – so why not spend the money to create the most comfortable space and home that we could?

“Seeing the transformation from what it was to what it is now makes us extremely proud.”

Gorgeous gardens
Outside, the gardens have also been redesigned and the front part is entered through electric gates with a circular “in/out” driveway with a central featured planted area.

The rear garden captures the sunshine for most of the day and the raised patio area is an ideal place to sit and relax and enjoy a barbecue, while watching and listening to the water features – and on special occasions a commemorative fly-past with the iconic World War II Lancaster Bomber and Spitfires circling overhead too.

“We have had so many great evenings here, including special birthdays, anniversaries and countless celebrations with friends – and we have fantastic neighbours on both sides of us.

“Although we enjoy gardening, the gardens are very easy to maintain, with trees and shrubs flowering throughout the year. Sitting in the garden is really quite special.”

With Nathan now based in Southampton to be close to his coaching staff, once the house is sold the couple plan to move to their recently purchased property in Cornwall where they hope to spend more time and eventually retire – although Paul still has a business to run in Lincolnshire.

“We will miss the village and the close-knit community. Woodhall Spa is an extremely friendly place to be as most people who work here also live here. You get to know the people in the local shops and when you’re out walking everyone has a smile and a hello – you may not speak to the neighbours every day, but you know they are always there for you.

“We believe that if you consider living in Lincolnshire, Woodhall has to be the place to live. It’s small enough to still be considered a village, yet large enough to have all the amenities you would need outside town living.

“We have put our heart and soul into this property and we wouldn’t be moving if it wasn’t for having bought the house in Cornwall, but this house is now ready for another family to move into and to make into their own home.”