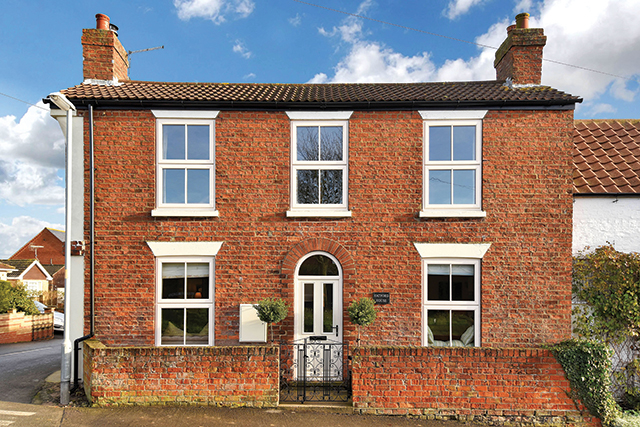 Tailor-made home in the Wolds

Previous experience of renovation projects in the Cotswolds gave Lynn and John Hatch the confidence to take on a handsome but dilapidated period property in Binbrook.
It wasn’t love at first sight according to Lynn: “Although we were attracted to the double fronted red brick house, we dismissed it numerous times before arranging a viewing, due to the dilapidated garaging situation to the rear of the property, remnants of a previous ownership by the Marfleet family who ran a successful coach company from Binbrook for many years. On viewing, we quickly realised that not only did the property require some demolition work but it also required renovation.”

The first evidence of a property on the site is a Deed from 1826 where a parcel of land with a thatched cottage is recorded. A later conveyance in 1916 refers to a dwelling house with yard, stable granary and outbuildings; similarly in 1964, but here it is referred to as The Nook.

When Lynn and John purchased in November 2014 it was known as Brynbeth, which they changed to Hatford House; an amalgamation of their names before their marriage.

The couple’s move to Lincolnshire was prompted by a wish to spend time with Lynn’s elderly mother. The Lincolnshire Wolds were only an hour’s travelling time away from her and the similarity of the landscape to their previous Cotswolds roots made Binbrook a perfect choice of location.

Having renovated two properties in the Cotswolds, they were undeterred and even excited about the prospect of putting their mark on an older property.

So began five months of building work during which a rear hall was created with a door from the courtyard rather than from the side lane. This small change made a huge difference. From the rear hall a WC/boiler room was created using space from an overlooked under stairs area.

The original kitchen was converted to a boot room/utility room with joiner-made storage cupboards and a seating area. This room now makes a comfortable space for Lynn and Johnny’s sprocker spaniel, Jasper, to sleep in. The original dining room is now a sitting room with large storage cupboard and log burning stove. The original sitting room is now a spacious kitchen/breakfast room with French doors opening onto the walled garden. On the first floor there are three large double bedrooms (master with en-suite) and a family bathroom.

“We were very lucky to work with excellent tradesmen during the refurbishment,” said Lynn. “Carpentry was done by our friend Nick Ransom from the Cotswolds, who came to stay for a time. He worked well alongside Phil Codd. Our builders were Dave Ward and Son and re-wiring was by GRS Electrics, both Louth based businesses. Windows and doors were replaced by Savills Glass of Goole. Further work carried out included damp proofing, insulation and dry lining (which gives an excellent EPC rating for a property of this age), new kitchen and bathrooms, new central heating system and re-wiring.

“Externally, the garden room was incorporated within the garaging but we were able to retain it as the structure was good. The room underwent the same treatment as the main house along with the addition of a new roof and now provides Johnny with a cosy office space.”

The couple were able to move into Hatford House in March 2015, enjoying the new layout of the property which is practical and which suits their lifestyle perfectly.

Lynn explained which features they have enjoyed most about the property: “Being south/west facing and with plenty of large front windows, the property offers so much natural light, an element which we feel is important in any home.”

The natural light has been optimised downstairs with a fresh clean look throughout and a high specification country feel to the decoration and furnishings. White has been used extensively but with Bleached Lichen (Dulux) in the sitting room. Farrow and Ball Cornforth White has been used on the stairs and landing which links nicely into the master bedroom. Bedroom three is painted in Farrow and Ball, Smoked Trout, a colour described as ‘romantic and dusty’. All of the decoration has an historic feel, in keeping with the character of the property.

“It was a pleasant surprise when we removed an arch of bricks above the front door and replaced them with glazing, giving us a perfect view of a Rowan tree situated on the grass bank across the road, which is a very pleasing aspect all year round. We also we enjoy the countryside views from the upstairs windows and overlooking our garden to the rear.”

Lynn and Johnny both studied garden design and Johnny carries out professional pruning for many clients in the Cotswolds and in Lincolnshire, therefore the garden has been of great importance to them both. In three sections, the first is an area of patio with storage shed and log store. The second is for dining where they covered a large concrete base with artificial turf. Here there are terracotta pots containing Hydrangea, standard Euonomous and a climbing Iceburg Rose on the southern wall. The second and third sections are divided by a rose pergola and low dwarf apple trees underplanted with lavender. The garden area is planted in a cottage style with the back wall covered with Clematis Montanna, a splayed pear and a vine which will grow to cover the south side of the garden office wall.

Fitting the artificial turf was a challenge for them both but they are so pleased with the result and wouldn’t hesitate to use it again in an appropriate situation. They feel it gave an instant lift to the space.

Their favourite aspects of house and garden have been the pleasure they get from looking out onto the garden at any time of the year.

“We also enjoy being warm and cosy during the wintertime. The heat from the log burner fills the sitting room and into the kitchen/breakfast room. We specifically left the doors off the rooms for this purpose as well as to help connect the space.”

Sadly, Lynn’s mother’s health deteriorated soon after the move and she passed away last summer.

The Hatches now plan to return to the Cotswolds as their children live and work in the south and they look forward to seeing more of them.

Lynn and Johnny will have many lasting memories of the Hatford House including many happy times with family and friends usually spent in the kitchen/dining area.

“The countryside and easy access to it has also been a huge bonus for us. There are numerous walks along many footpaths in the area. We will miss the peace and quiet of the edge of village location, yet the village offers such good facilities including a doctors’ surgery, primary school and a post office. It is a sociable community offering a variety of groups with easy access to the market town of Louth and Market Rasen with its excellent train links into Lincoln.

“Actually we will miss everything about this home.

We made a house that was ‘tailor-made’ for us!”