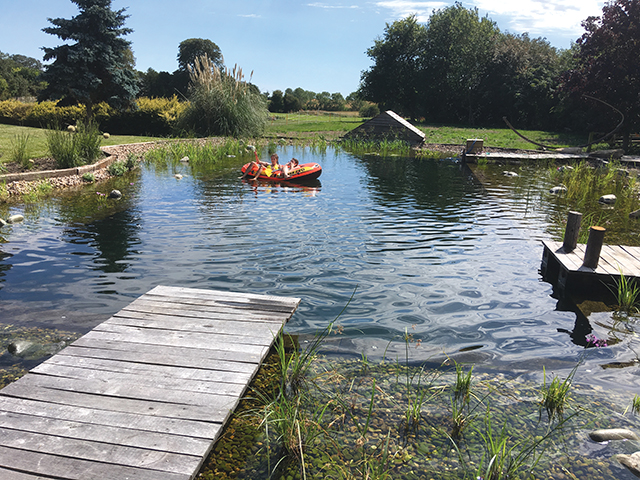 Taking the plunge to swim with nature

Wild swimming doesn’t always involve taking a dip in a river or lake. Caroline Bingham visited Paul Bradbury who, with the help of his wife Debby and several friends, decided to build a swimming pond in their garden.

The couple moved to their home, Hamilton House in Toft next Newton, nearly 10 years ago but ambitions to build a large water feature were put on the back burner while the house was renovated. Once that was completed Paul’s attention moved to his long held wish to create a pond or pool.

“We could have opted for a conventional swimming pool but that seemed quite sterile and high maintenance bearing in mind the wildlife we already attracted into the garden,” Paul explained.

Initial planning
Hamilton House is surrounded by extensive lawns and paddocks so space was not a problem but what required more thought was the best positioning in relation to the house for this ambitious project. Paul’s research began in earnest five years ago – watching YouTube videos, establishing and visiting contacts who had already constructed similar scale pools and of course understanding the ecological and biological dynamics of creating a fresh water filtration system.

Paul’s notebook is filled with initial drawings, specifications and a diary of the build which began in September 2018 with a sample dig to test the soil.

“Our initial thought was to locate the pool to the side of the house where access to the garden is through large patio doors but it was suggested to us that the rear lawn, with a south facing aspect was preferable. This area was on a slight elongated slope rising to a hedge which gave a more natural landscape and an already established backdrop to the site.”

The chosen plan was to create a central swimming area, measuring 15m x 6m, defined by two metre high breeze block walls. The swimming area would be 2m deep at one end, with a jetty and then slope to 1m depth at the other, where Paul chose to locate the pump house. Shallow margins would extend around the pool, where aerating pipes are concealed below gravel planted with grasses and irises, earning their keep in the ‘regeneration zone’, feeding from any algae in the water.

The build
A laser level, belonging to a friend, was invaluable to ensure the initial dig was accurate and 250 tons of soil were excavated to create the hole. Some topsoil was kept back for landscaping later, while more was shared with neighbours or used to level a dip in a paddock.

A hardcore base was then laid, ready for 250 cubic metres of reinforced concrete to be poured. Once the base was created, with two sump chambers which accommodate aeration feeds from the pumps, the densest specification breeze blocks were laid to build the walls. The final job that winter was to sculpt the margins and order the custom-made EPDM liner which would shroud and make the whole area watertight. Work resumed in April 2019, when the liner, weighing 7 tons arrived. With a huge and exhausting group effort, the liner was laid and the pool was part filled to add weight and stop rainwater and the water table ingress under the liner. As the fill continued, Paul noticed that the liner was falling short near the pump house end and it was then that he realised the liner had been delivered upside down and installed inside out. “We had to get more liner and weld sections where there were incomplete areas but up to then all had gone quite smoothly, so I built the pump house and Debby had high hopes of taking her first dip that summer.”

Leaks
In August 2019, the family were able to have their first test of the water. The margins were now planted with species such as zebra rush, purple loosestrife, cyperus longus and phragmites or common reeds recommended and installed by a team from Lincolnshire Pond Plants at Brookenby for their ability to filter the water and keep the pool in natural balance.

It was actually summer 2020 before the pool would be fully used due to a series of leaks which sprang. The pool steps became a good measure of whether water was being lost. The first was caused by mice nibbling and building nests in the fleece under liner near the pool house. Paul has had to drain down with the aid of a series of increasingly powerful pumps to get on top of these irritating teething problems. The next was caused by a liner failure near where the pumps vented out and over this winter seals between the liner and the flanges on the metal sump boxes failed.

Pool party
Last summer was a great opportunity to finally enjoy the pool with socially distanced guests. “The plants were looking great. The pump house, with three pumps, a bead filter and the aeration system were all doing their jobs and the 90 tons of pebbles which cover the margins were all clean and algae free.” Oak decking and a pergola surround part of the pool where Paul has installed the teak bar he had always wanted and wildlife adopted the pool as part of the garden landscape. “We have seen a kingfisher here (although there are no fish in the pool) and so many varieties of dragonflies, butterflies, frogs and newts. It is beautiful to be swimming when the jewel coloured insects hover close to you above the water.”

While the pool is not heated it does benefit from the pebbles and margins absorbing heat which filters back to the main swimming area. Last winter Paul and Debby invested in wetsuits, after another major leak appeared. “We had to break ice to get into the pool so wetsuits were the only option.” This time it was a manufacturing fault which was the cause, so the liner makers returned to repair the problem.

Paul could certainly now write a book with his knowledge and experience of this build and the energy and commitment it has taken to see it completed after five years of planning and tribulations.

There is also a considerable budget needed to undertake this scale of work. Paul estimates that they have spent between £70,000 to £80,000 so far but compared to the initial and ongoing costs of a conventional pool he is more than happy with the investment. This spring the plants are just beginning to reappear and the cycle of filtration and regeneration will begin ready for a summer of enjoyment and hopefully no further leaks.