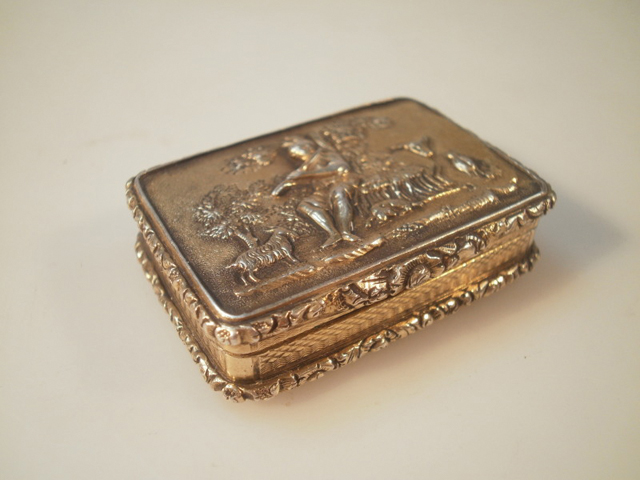 Golding Young and Mawer Auctioneers and Valuers
The fashion of the nineteenth century was to carry perfumes to freshen the air in the belief that noxious fumes carried and spread disease. From the 1800s perfumers were skilled in extracting the fragrances of flowers and spices, and prolonging them in oils. These were then absorbed in small sponges and placed in fancy silver boxes with hinged and perforated inner covers to allow the aroma to escape. These tiny containers came in many forms, normally a few centimetres wide, the designs followed fashions and became more elaborate throughout the nineteenth century. As well as the rectangular form, novelty shapes such as baskets, animals and fruits were made, all with beautiful detail, and complete with fancy pierced grilles often gilded for added attraction. Birmingham became the centre for production, led by specialist silversmiths such as John Bettridge and Nathaniel Mills.

The beauty and craftsmanship of vinaigrettes attract collectors today. Illustrated are six examples along with hammer prices recently achieved by Golding Young and Mawer at the Grantham auction rooms.

LOT 32
A George IV silver vinaigrette by John Bettridge, inscribed on the lid ‘Forget me not’. Birmingham hallmark 1829, 3.5cm long.
£170

LOT 40
A George IV silver vinaigrette, the lid with repoussé decoration depicting a shepherd playing a flute surrounded by animals, the base inscribed with initials ‘CM.’ Birmingham hallmark 1829, 4.3cm long.
£850