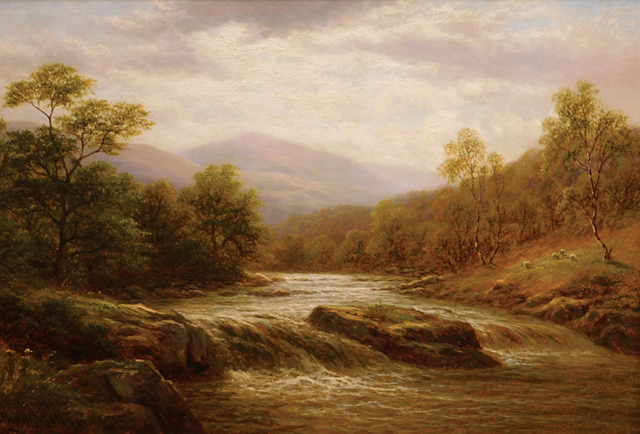 The first 54 lots were all from a Nottinghamshire collector and consisted of a broad selection of 20th-century artworks, mainly by British artists. The collection sold for over £13,000 with an individual highlight being a watercolour pen and ink drawing titled Landscape Study V by Graham Sutherland, which sold for £700.

Born in London in 1903 Sutherland studied at Goldsmiths College and went on to be an official war artist as well as representing various art movements at exhibitions. He is possibly best remembered for a less than well received portrait of Sir Winston Churchill.

Entered into auction through our Louth office was an oil painting titled St Paul’s from the Thames, painted by Norman Wilkinson. Born in Cambridge in 1878, Wilkinson studied in Paris and went on to be a leading marine artist. The London scene painting exceeded the auction estimate of £1,000- £1,500 when the hammer fell at £3,600.

William Mellor is a well regarded Victorian landscape painter. Born in 1851, he painted North Wales and West Country scenes in his 80-year lifetime. A pair of his works consigned by a well-known Lincoln doctor sold at just above top estimate for £2,600.

Following the sale of a Lincolnshire farm, a Henry Murch (1824-1890) oil painting following the style of Canaletto was entered into auction. Nineteenth-century works in the style of past masters have been out of fashion in recent years and with only a modest mention in art dictionaries, a modest auction estimate of £150-£250 was placed on the picture. This proved just right to attract multiple pre-sale interest and the competitive bidding finished at £2,200.

Not all artworks need to be original, as illustrated by a set of six artist signed prints which sold for £1,000 – twice the auction estimate. Cecil Aldin (1870-1935), a leading animal and sporting painter and the subject matter – The Cottesbrook Hunt – proved too good a combination for auction art collectors.